As I write this on April 2, spring is teasing its way to North Haven. A few brave bulbs have bloomed, pussy willows are in full force, and the sun has encouraged a few afternoon walks. Today the sun through a haze of clouds looks suspiciously snow-like, although temperatures are staying above freezing. The end of winter is nigh, though it will cling as long as it can.

With the end of winter, I hope to also see the end of the various upper respiratory and GI epidemics that have cycled through all 350 of us ceaselessly for the last four months.

In public health terms, an island might as well be a cruise ship. Isolated, out in the ocean, with a more-or-less fixed population and a few locations where we all gather, germs can spread faster than butter on hot toast. Just like hapless vacationers, we pass norovirus around and around and around, we spread our cold and flu from the preschool all the way up to the more mature crowd that gathers at community lunches and coffee hours.

This Christmas saw perhaps the worst norovirus outbreak ever. As I watched from California (my own daughter got it the night before we left for the airport), friend after friend posted regrets at missing the Christmas Eve service or even a family gathering on Christmas Day due to a vomiting child or self. One by one they fell, and then it made the rounds again in February.

The colds have been more or less constant. With a fever, with a sore throat, just the sniffles, full on body aches—every variation has been played out. My daughter had just three of her 13 classmates in school for a few days, and was herself recently sent home with a “snuffy” nose, malaise, and a low fever.

I felt the itchy tingles settle in my nose after dinner last night, and just hope it doesn’t get worse. My husband actually went to the clinic this morning, which tells you how sick he is. And even with rigorous attention to hand washing, all of us packed together in classrooms and the community center and the ferry and the grocery store means that an enterprising adenovirus or rhinovirus doesn’t have to work very hard to move from victim to victim.

This flu season, of course, brought with it a little more than annoyance and discomfort. With news of the vaccine’s limited effectiveness, and reports of influenza-related deaths, parents lived in dread of their children or themselves becoming infected. We had a handful of cases on-island, some of which did turn into pneumonia, but thanks to prompt care and a generally healthy population, we all made it out alive. Those who did get the flu isolated themselves in their homes, and the quarantine certainly benefited those of us who managed to evade the virus’ grasp.

And now it is spring, and we harbor hopes of the sun baking illness out of us, and time spent out of doors and in less cramped quarters decreasing the instance of transmission from slobbery toddler to parent to coworker to friend to offspring. As more restaurants and stores open for the high season, and we distribute ourselves a little more thinly around the island, we become less cruise ship-like and more a part of the larger world. 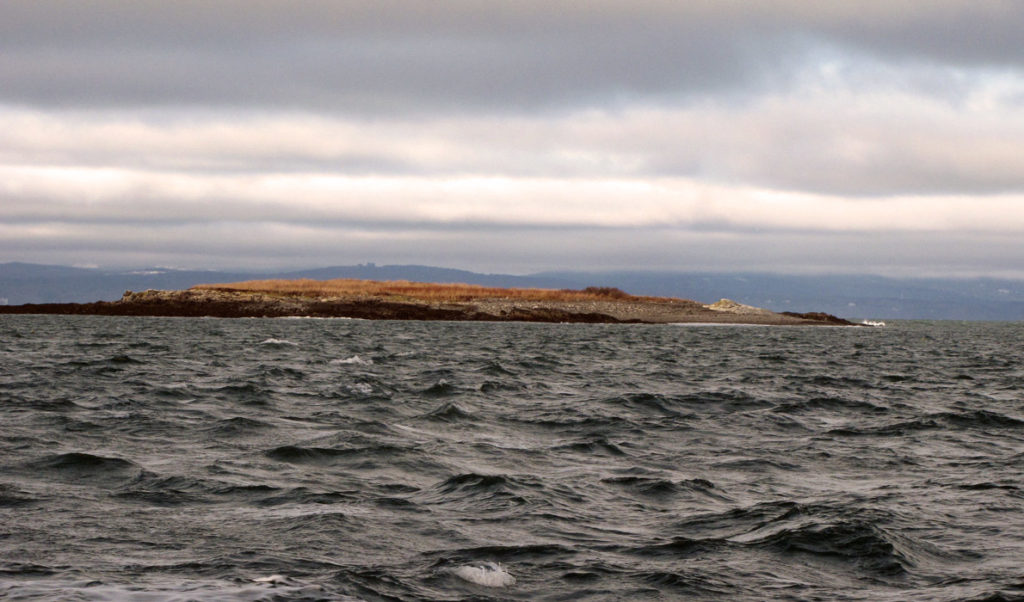 A small island near North Haven