An anchor of Rockland’s restaurant scene, Café Miranda has maintained its popularity for over 20 years. These days its founder, Kerry Altiero, isn’t content to just rest on his laurels, hailed as Maine’s “pioneer chef” and a prize-winner in culinary competitions. His creative restlessness and curiosity still drive him to experiment, reinvent and push the limits.

Melissa Kelly, chef and owner of Primo, also in Rockland, sings his praises (assuredly, being “rock and roll” and a “badass cook” are good things) in her foreword for Altiero’s new cookbook.

The book’s title offers insight into the nature of its recipes: Adventures in Comfort Food. Isn’t there a twist in that pairing, one the antithesis of the other? Comfort is usually presumed to be found in the familiar, whereas an adventure is something new, different, a departure from the known.

After we take a minute to digest that paradigm, we might then wonder what to make of the subtitle (not the least bit subtle!): Incredible, Delicious, and New Recipes from a Unique, Small-Town Restaurant. OK!

Welcome to the playful, pun-full, and hyped-up world of Kerry Altiero, who has a way of upending the expectations—both literary and culinary—of a celebrated chef and his community-fixture eatery.

Altiero fearlessly explores a wide-ranging array of flavors and ethnic influences. At the same time, as he demonstrates great respect for authenticity (with recommendations for the precise brands of seasoning necessary), he is also hard at work playing with tropes, creatively reinventing classic dishes.

And the playfulness extends to the nomenclature.

His names for dishes are often the punch line of a joke. You’ll need the story for it to make sense, and Chef Altiero happily obliges. Thus, there are ones like “Shitakes have hit the fan,” “Fries with That?” “Intergalactic Pork,” “No Excuses,” “Wedgie,” “Wontons From Spaaaace,” “I Had It in Biddeford” and “Pitch a Tent” (and in this case, the photograph alone can do all the explication.)

The large, wood-fired oven that turns out Café Miranda’s signature focaccia, pizzas and many main dishes might make a cook in an ordinary kitchen wonder: Chef Altiero, what do I do? He suggests cranking your oven up to a high temperature, sometimes 500 degrees F (and “get yourself some good potholders.”) That might make you delay to cooler weather using some recipes, but anticipate that on a frosty day there will be multiple benefits to that hot oven.

Seasonally, Altiero uses locally grown produce from the Headacre Farm in Rockland, so his recipes provide a lot of inspiration for utilizing crops that can be grown in one’s own backyard here in Maine, or obtained from a nearby farmers market. And of course, he puts to good use the fresh seafood of Maine’s waters.

Working with that bounty of ingredients (including meat and poultry), his recipes are both extremely local and exquisitely international. Altiero draws on his own heritage of Grandmother Connie’s rustic Italian cooking during his childhood in coal-mining Pennsylvania, while adding flavors from Asia, Latin America and classic Americana.

He doesn’t call it “fusion” nor does he try to appeal to rarified “foodies.” Altiero offers up a variety of dishes, at his restaurant and in his book, that a whole range of people—tourists to townies—can try (an adventure!), and end up enamored with (ah, the comfort).

While serious about good food, Altiero’s humor and enthusiasm make this cookbook fun to read and use. As he writes in the introduction, “The passion and heart that we cook with comes out on the plate.” That isn’t just a restaurateur and chef speaking about himself–it’s about all of us. 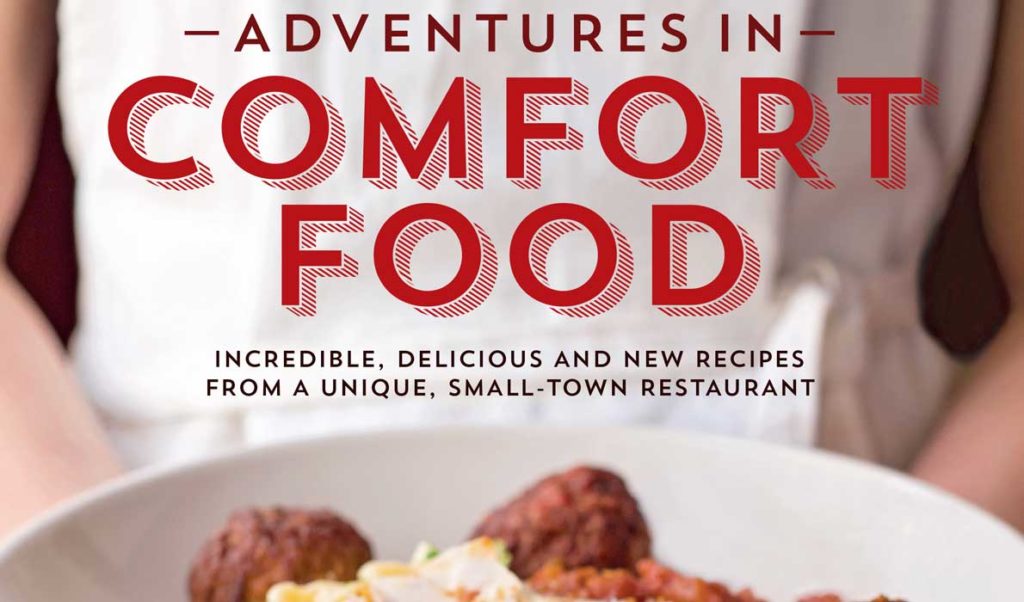