Visitor numbers at Acadia National Park continue to climb, a positive trend mirrored by the state as a whole.

Park visitation as of Oct. 31 was up 8 percent over the same period in 2014, which had 2.56 million visitors overall and was one of the park’s top years ever, said park Management Specialist John Kelly.

It was also the busiest year ever for the Island Explorer, the fare-free, seasonal bus system that runs through Acadia and surrounding communities. Ridership increased 6 percent over 2014, which saw a 12-13 percent increase over 2013, said Paul Murphy, general manager of Downeast Transportation, which runs the Explorer.

Originally, the number of cruise ships arriving in Bar Harbor was also expected to reach a record 140 for the May 1 to Oct. 31 season. But, largely due to weather cancellations, 117 ships came calling, fewer than the previous two years, said Harbormaster Charlie Phippen. In general, though, the growth in cruise ship numbers contributes to the growth in park visitation; the number of cruise passengers visiting the park has increased 350 percent since 2000, said Kelly.

Although there’s no hard data yet, it appears strong visitation has been great for the local economy.

“The lodging and eatery establishments have reported the best season they have had in the last few years,” right up until the end of October, which coincided with the last cruise ship in port, said Bar Harbor Chamber of Commerce Executive Director Nancy MacChecknie.

“Acadia National Park’s numbers were consistent with those reported in town, so the visitors were clearly experiencing many parts of MDI,” she said. “The shops were happy as well, and many of them will be opening again between mid-November and New Year’s.”

In 2014, Acadia’s visitors spent $221 million on amenities and essential services such as lodging, food, and gas, supporting an estimated 3,486 jobs and having a total economic benefit of $271 million in the local area, according to a National Park Service report.

At the state level, preliminary estimates from the Maine Office of Tourism show that visitation to Maine from May through August increased 5 percent, from 23.1 million in 2014 to 24.2 million in 2015, with both day and overnight visitation showing strong growth. August restaurant taxable sales are up 5.61 percent and lodging taxable sales are up 4.03 percent, with combined restaurant and lodging taxable sales up 5.18 percent year-to-date through August, said tourism office Director Carolann Ouellette.

“Preliminary reports from the Maine Turnpike Authority also showed a more than 4 percent increase over 2014 traffic at the York toll plaza for the 2015 Columbus Day weekend,” Ouellette said.

According to the tourism office’s visitor tracking research for the summer of 2015, the drop in the relative cost of travel nationwide, as indicated by the travel price index, as well as the sharp decline in the cost of gasoline, are likely reasons for the increase. The proportion of overnight visitors arriving from the mid-Atlantic region showed an increase this summer over the prior summer, possibly due to increased targeting of markets further away from Maine. And a continued drop in the Canadian exchange rate appears to be influencing Canadian visitors’ decision to visit the United States and Maine, the report says.

“Anecdotally, we’ve been hearing from businesses that it’s the best year they’ve had since they’ve been in business,” said Ouellette.

At Acadia, visitor numbers are posing transportation strains. Earlier this year, park planners began the process of drafting a transportation plan to address problems. The Island Explorer system, established in 1999, has relieved a fair amount of traffic—carrying almost 5.5 million passengers to date, and eliminating more than 2 million private vehicle trips, according to estimate. But during the height of summer, there are hot spots around Acadia that are badly congested, notably the 27-mile Park Loop Road when it’s swarmed by concession buses, commercial motor coaches, RVs, automobiles, motorcycles, bicyclists and pedestrians.

During the past summer’s peak months, congestion at the top of Cadillac Mountain was so bad at times—with drivers unable to find parking or even to exit the summit—that the park closed the access road at the bottom, to allow conditions to loosen up, with rangers at top and bottom monitoring the situation.

The problem has accelerated in recent years, thanks to Acadia’s booming popularity. The new transportation plan is aimed at creating a safe and efficient transportation system throughout the park. The park completed an initial public scoping period on Sept. 30, reviewed comments, and is now working to define a vision for the park in terms of resource conditions, visitor experience and facilities by sectors and come up with a range of potential solutions.

“For example, one of the common recommendations is to provide some type of transit service to the top of Cadillac,” Kelly said. “That’s an alternative that is for sure going to be in the mix for public comment next summer.”

Park planners expect to hold the next round of public hearings in the summer of 2016.

In the meantime, the town of Bar Harbor is addressing the question of cruise ship congestion. With an estimated 146,436 passengers arriving at this small town’s doorstep in 2015, the town has a daily cap on the number of passengers onshore of 3,500 in July and August; and, the rest of the season, either a daily cap of 5,500 passengers or three ships in the harbor, whichever cap is met first.

The town is also keeping tabs on the possible acquisition of an old ferry terminal outside of the busy downtown waterfront. Voters recently approved an $85 million statewide transportation bond issue that includes the remaining money needed toward the $3.5 million price that will allow the Maine Port Authority to purchase the former Marine Atlantic ferry terminal from the Canadian government. Converting the terminal to cruise ship use is seen as a way to relieve congestion in the center of town in a couple of ways: Ships will be able to dock, allowing passengers to disembark at will, rather than tendering en masse, and the 4.5-acre property could accommodate tour and public bus traffic.

The centennial of both Acadia and the National Park Service could make 2016 an even bigger year, planners say. At Downeast Transportation, Murphy said the company is looking into the possibility of leasing more buses for July and August, and recruiting more drivers. 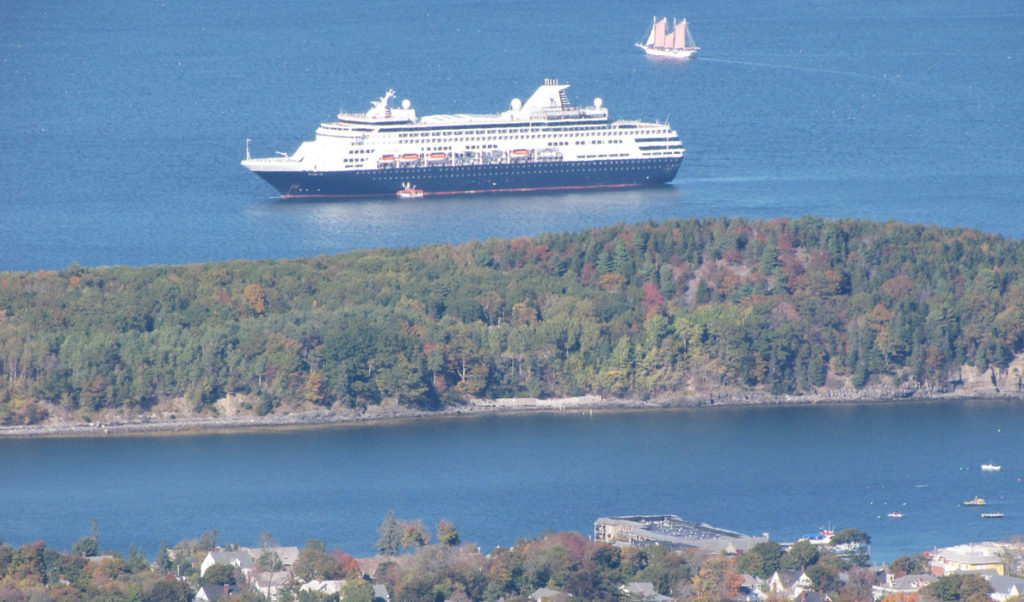