A year on North Haven follows a predictable rhythm. For nearly a decade my husband and I have lived by that rhythm. We know which weekends to avoid the ferry and that it’s surprisingly easy to leave for Thanksgiving, since most people stay. We look forward to the church coffee and doughnut days that highlight most Monday holidays, and Beano at the Grange is as welcome a harbinger of spring as a chorus of peepers.

Since last May, running in parallel with the milestones of the North Haven year, we’ve watched the baby grow and change. In late April, just before leaving the island to wait in quarters closer to the maternity ward at Pen Bay, I hoed decomposing seaweed into our raised beds. The buds on our magnolia, a wedding present, were tightly closed when I left. When we came home from the hospital with our chubby, squinting, third family member, they were wide open and blushing pink against a blue May sky.

Our first family outing was to Nebo’s Mother’s Day brunch. My husband wore the baby to the Memorial Day parade where she snoozed through the gun salute and taps.

The rest of May and June were a blur of nursing and spit-up and diapers, punctuated by family visits and high school graduation in the church. We dressed the baby in a watermelon-patterned outfit and took her to the Calderwood Hall grand opening. It was cold—June on North Haven can’t make up its mind about summer—and her outfit was hidden under a giant cardigan.  She took her first bottle from my husband on a weekend in June and in July I opened Little Urchin Bakery for bread and breakfast. The baby spent mornings with her father and with her first babysitter. I picked her up at nine each day after spending three hours in the kitchen, boiling bagels and slashing loaves of rye bread. She fell asleep in the car on the way home and I pumped milk, napped or cleaned until she woke up.

We went on outings to the Turner Farm, visiting the herd of Oberhasli goats and picking up bags of peppers or bunches of herbs. We sang and danced at Family Morning Music; I did, anyway. The baby slept. I brought her outside to lie on a blanket while I picked green beans and tiny white turnips for lunch.

In August she suddenly stopped sleeping in her crib. As my husband’s schedule got busier as Waterman’s events ramped up, I spent evenings at home attempting to get the baby on a sleep schedule, fighting frustration as she invariably woke up 20 minutes after I put her in her crib, cozily swaddled.

I sat in our darkening room while she cried, hoping that in her tiny head I was instilling the ability to self soothe. It never happened. The night before Deerhoof came to play their brilliant, manic set at Waterman’s, I slept on the floor on a pile of blankets with the baby. Usually in August and early September I’m getting ready to go back to work —instead I was spending nights trying to soothe a furious four-month old and often sleeping with her in a trundle bed.

We took our annual trip to Moosehead Lake and learned that although the baby loved looking at the sun through birch leaves, she wasn’t a fan of her life jacket.

In mid-September we started letting the baby sleep in her swing, and suddenly nights were peaceful again. I started writing my book in earnest; I was on a sabbatical from teaching and writing a book was the stated purpose. The baby went to a sitter for a few hours once a week so I could teach band—no substitute teacher could be found. September on North Haven is a relief—the frantic pace of summer suddenly releases, but the weather stays golden.

This autumn was about the baby exploring the world on her front, playing with fallen leaves and pushing up onto her hands and knees. She wore a shark costume to the Waterman’s Halloween party, which she mostly slept through, and sat unsupported —briefly—on a hay bale. The next day she saw snow for the first time.

Winter came early and stayed late. The baby was unimpressed by her first sled ride around my parents’ house, but liked coffee and doughnuts at the church for Martin Luther King Jr. day. She crawled for the first time at family music in December, and pulled herself up to standing a few days later. We missed Christmas on the island, the sweetly serene church service, but lit our menorah before we left for California.

As winter stuck around, the temperatures settling in the single digits for weeks, she switched from a fleece suit to a real snowsuit. I finished my book and went back to work in late January.

She practiced crawling and interacted with her babysitter’s slightly older daughter. She started making sounds that could be dog and ball, mama and dada. She stood without holding on. After daylight savings time we finally resumed our afternoon walks.

And here we are—nearly a year later. Although as I write we’re still digging out from several feet of snow, the chickadees and cardinals are out in force and the poplars are squeezing out catkins and leaf buds. The maple is letting its freak flag fly with its red bottlebrush flowers.

The baby took her first step today —just moved one foot a few inches without holding on to her toy cart. In a few weeks, incredibly, the magnolia will be once again open against the blue May sky. Crowds will gather for the Rec Council island clean-up and cookout. The Earth will be back in the position it was in when my family became three instead of two, the island rhythm and the baby’s rhythm once again in sync. 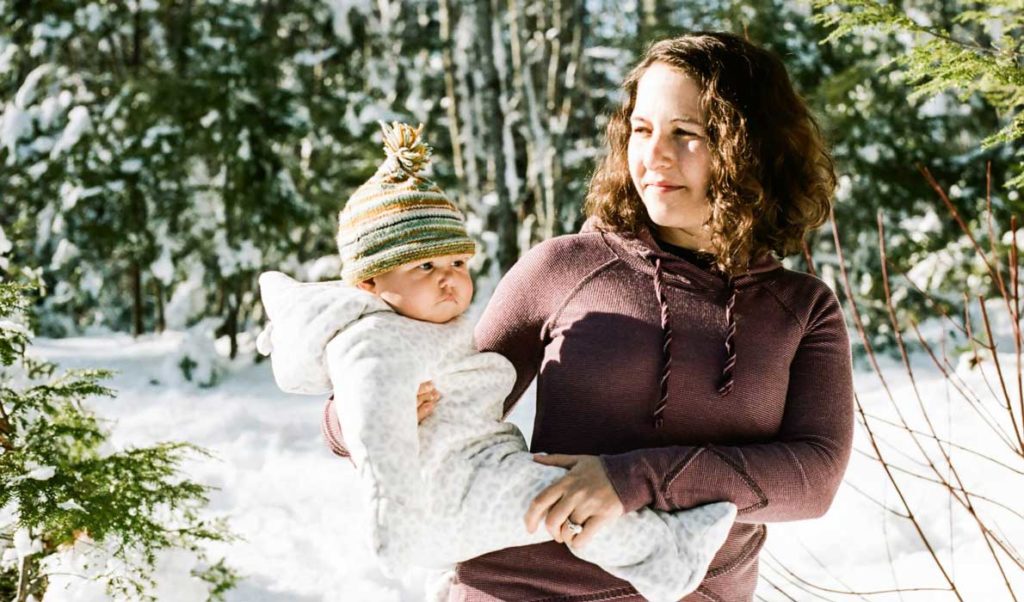 Courtney Naliboff and her daughter.