Story and photos by Kelli Park

From hand-hauling lobster traps to selling more than 10 million pounds of bait annually, Jennie Bichrest knows the working waterfront inside out. This summer, as the lobster industry faces a shortage of herring, the bait of choice, her business—Purse Line Bait—is playing a critical role in keeping that waterfront working.

Bichrest was growing up in Illinois until a vacation brought her family to the Maine coast in the early 1970s. Her father was hooked, and family vacations were then spent on a commercial fishing boat. Later, her father bought a 46-foot sailboat with a vision of educating his children as they sailed around the world. The family moved to Cundy’s Harbor in Harpswell, and though the children did learn to sail, the around-the-world voyage never happened. 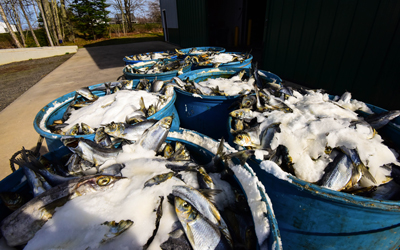 Instead, Bichrest stumbled upon old wooden lobster traps in her neighbor’s barn, which inspired her, with the help of her grandfather, to build her own by steaming and bending wooden bows using a steam-box she found in the barn.

While her father found work on fishing boats in and around Cundy’s Harbor, Bichrest hauled traps by hand with her own skiff and spent time with her friends working on the water, where she was the only woman.

“I was never a ‘girly’ girl,” she says. The group she hung out with was into fishing, so that became her focus as well. She eventually married Mark Bichrest, whose family has been fishing for five generations.

The two worked independently on the water—she lobstering, he dragging—until pogies arrived on the coast in the late 1980s. Mark was fishing for a Russian ship, Riga, which anchored offshore and processed fish into fishmeal. “They all wanted jeans, Levi jeans from Goodwill,” she remembers. “Jeans and cigarettes.”

Jennie and Mark soon started their bait business with a boatload of pogies at a time, delivering to local wharves and individual boats, until word spread and demand grew.

“When we first got in business, we knew you had to have storage,” she remembers. “The herring were only around so long. We survived more on fresh fish coming in. We had dump trucks, and we loaded the fresh fish every day and we would go to the wharves.”

But if there was no catch, her customers had no bait. 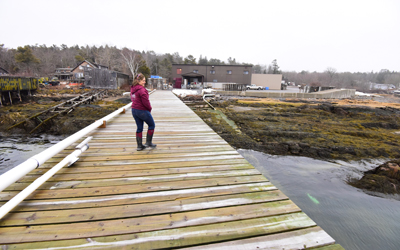 “That’s when we started barreling bait,” she explains. “Once they started with the quotas, there was more need for freezers and storage.”

Within a few short years, the business had evolved from boatloads of pogies, to truckloads of fish, to the widespread distribution of salted, barreled bait with the need for storage facilities.

Demand continued to grow and in 1996, the couple bought a facility in Sebasco once used to make ice for fishing boats, and it became home for Purse Line Bait. After their divorce in 2003, Jennie Bichrest expanded the business with the purchase of additional freezer facilities in Harpswell to meet the demand created by quotas placed upon commercial fishing—more freezer space was needed to store fish, ensuring its availability throughout the year after quotas had been met.

The vagaries of fish populations impact the business, she said.

“The first year pogies hit it was devastating,” because when that fish was available for bait, the demand for other bait, like that which Purse Line sold, can decrease rapidly. If her freezers are full because fishermen are buying bait from different sources, her largest supplier will find other markets for his product.
“People don’t understand that you have to keep it all going, or they’re not going to be there. That’s what frightens me,” she confesses. “They don’t think about all the other people the business supports—the carriers, the other boats.”

In February, the National Oceanic and Atmospheric Administration cut the 2019 herring quota by about 70 percent, from 110 million pounds to 33 million pounds. Herring is the most commonly used bait in the lobster industry. Bichrest believes that the cut will hit the island communities the hardest, where lobstermen rely on the carriers for bait.

“There’s not enough freezers in the state of Maine with this latest herring cut,” she says. “And really, more importantly, we’re going to lose the infrastructure.”

Bichrest has advocated for conservation measures that would ensure sustainable fisheries, including encouraging closures during spawning on Georges Banks, popular fishing grounds between Cape Cod and Nova Scotia, to promote the growth of young fish.

“You can’t continue to kill babies and expect to have a healthy fishery,” she says. 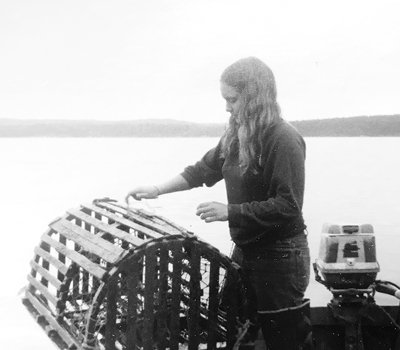 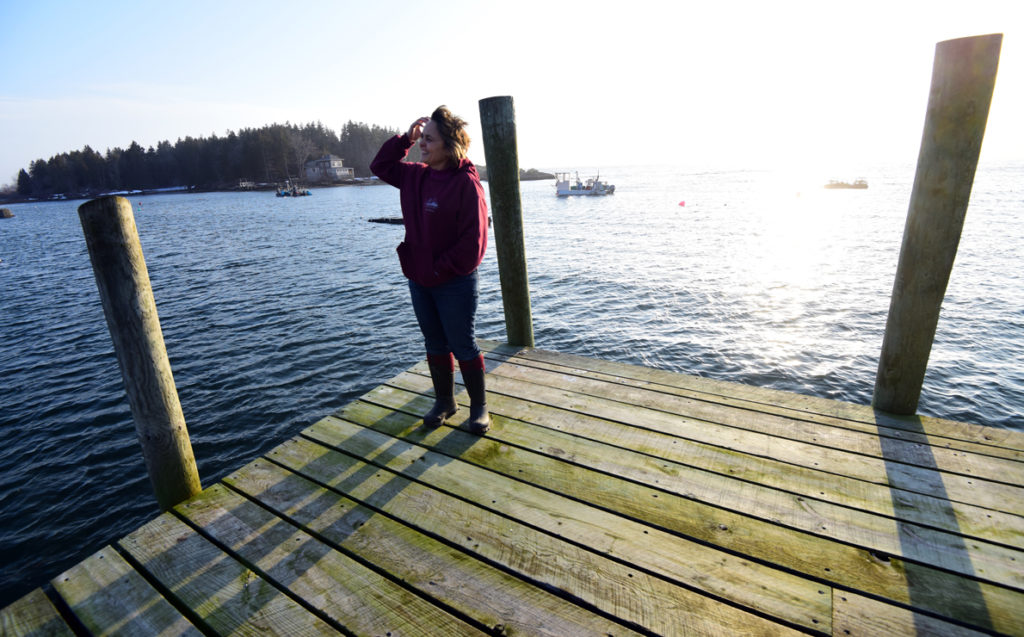 Sea sickness of another kind