Deep into her memoir Black to Blue, Jamie Rooney recounts the steady sexual abuse she endured from her 16-year-old stepbrother. At this point in the book, it’s not the first such violation she’s had to endure.

“I can’t believe no one ever picked up on this,” she writes 20-plus years later. “I can tell in an instant when my children are anxious or upset. How did my feelings go unnoticed? Was I that good of an actress or was no one paying attention?”

Important questions, even for those who live in coastal Maine. This abuse occurred in a ramshackle house in Jackson, less than 20 miles from the brick- and granite-edged sidewalks of Belfast.

She made it out of a maelstrom of poverty, both in Jackson and in the housing projects of Worcester, Mass. Out of beatings by her stepmother that left her bloody. Out of her Worcester home, where drug and alcohol abuse by her mother and other adults were as common a backdrop as a noisy TV might be in other homes.

Out of this cesspool of dysfunction, Rooney escaped, ostensibly intact.

Today, at 38, she is the school resource and DARE officer at York Middle School. In an encounter with a handful of girl students in the hallway of the school recently, she and they beam smiles. The girls touch and hug her, the wholesome affection a contrast to what she writes about in the book.

How did she survive, and indeed, thrive—now with 16 years under her belt as an officer with the York Police Department—when others, including some with whom she shared a household, are among the walking wounded?

Again and again in the book, Rooney describes her strength, her unwillingness to be defined by her abuse, her focus on her goals. She knew it was this strength—both physical, even though she is petite and feminine, and emotional—that would save her. And it did.

“I was just too damn stubborn to accept it,” Rooney said in an interview. “Along the way, I just never accepted the way people expected me to be.”

But where and how did institutions fail her? The horrors of her childhood occurred not in some 19th century Dickensian setting, but in 1980s and 1990s New England, after mandatory reporting and awareness programs were well established.

Rooney’s life began in low-income housing in Worcester. Her mother and father split early in their marriage, and he returned to his family in Jackson and she stayed with the two girls in the housing projects in Worcester.

Her mother, identified by the pseudonym “Lori” in the book, herself had a childhood marked by brutality at the hands of an older brother. This explains, Rooney says, but does not excuse Lori’s failings as a parent.

“I think everybody has a choice and I think that everybody can make something of their life. You just have to want it,” she says.

When her state aid checks arrived, Lori would start a party that might last days. People Rooney knew, and some she didn’t, would drink, smoke marijuana and snort cocaine, often passing out around the place. Because the money would then run short, and Rooney and her sister often would go without food, she would sometimes go through the near-comatose revelers’ pockets, taking cash.

In the book, she tells of stealing shoes from stores when her own no longer fit or had holes in them. In an interview, she chuckles at the memory, and explains the ethic she developed around this crime, taking only what she needed, and never the most expensive or flashy footwear.

When things got especially bad in Worcester as her teen years began, she accepted the offer to move to her father’s family home in Jackson, a town of just a few hundred residents in rural Waldo County.

The move brought with it new horrors—beatings by her father’s new wife, and sexual bullying by the woman’s son. For a time, he would climb into her bed at night and force himself on her. Another stepbrother would bully Rooney and her sister by trying to watch them in the shower; the girls had to take turns guarding the make-shift door.

But rural poverty offered escapes that urban poverty did not.

“I definitely think the projects were worse,” she says. “You didn’t have any place to escape. You were like sardines in a can.”
The housing was poor in both places. Rooney says human services workers in Worcester would inspect the apartment from time to time, point out the dirty oven but fail to see that there was no food in the refrigerator, and that in the girls’ bedroom, they slept on a mattress on a filthy floor.

“In Jackson, our house was a dump. There were parts in the floor where your foot would go through,” she says. “It was a small farm, so we always had food. I actually started to eat a lot and I got chunky.”

In Worcester, a meal might be a piece of bread with mustard on it or a raw hotdog eaten while running out the door to school.

In Jackson, “We had cows, we had chickens, we had vegetables,” she says.

In Maine, human services workers would come to the house because of reports made by neighbors or teachers, but the household would close ranks.

Abuse occurs across socio-economic groups. But Rooney’s story may be seen as reinforcing the stereotypes about poverty.

“The risk factors are definitely higher in lower income homes,” she says. Poverty brings stress, she explains, and stress creates chaos. “Chaos is the perfect word, because you don’t know what will happen. The next hour could change your life, let alone the next day.”

The projects were a sexual predator’s playground, she says.

“It offers an opportunity to predators, when you live in a home with absent parents,” Rooney says. “They’re distracted or high or not there at all. I feel like it was a playground for that opportunity.”

Another odd dynamic that came from poverty was that Rooney’s strength sometimes triggered physical abuse from those around her. “You think you’re better than me,” would be the excuse for hitting her.

After one terrible beating in Jackson, Rooney moved to a friend’s home and never returned. She finished high school, attended the Upward Bound program at the University of Maine, then Southern Maine Technical Institute and finally University of Southern Maine, studying criminal justice.

As school resource and DARE officer, she is able to help vulnerable and abused children. She remembers what helped her endure, and offers the same.

“What worked for me was those few people who went out of their way to say they saw something in me, that I was special, that I would do something,” she remembers.

Black to Blue reads like a police affidavit—plain, unadorned facts. Her matter-of-fact telling reflects, perhaps, the way her child’s psyche absorbed the hurts. And it’s more welcome than any writerly flourishes.

But she also is insightful as she explains what she’s learned, what she thought at the time, and how she now understands the family members who failed her again and again.

In an hour-long interview, the only time Rooney grows emotional is when she talks about her own children, now 10 and 7. She experiences the childhood she never had through them.

“When we go to the playground, I’m on the monkey bars, because I want to prove to them I’m not old yet. And I’m the mom at the trampoline park, not the one on my phone, I’m the one jumping with the kids, trying to do a flip and cracking my neck, and saying, ‘OK, help me up.’ I am that mom. And they are so awesome,” she says, tearing up.

Concluding our talk, she smiles and says, “Everyone needs hope, right?”

Black to Blue is available at JamieRooneyBooks.com and other online retailers. Rooney will read and speak at the Belfast Free Library on June 29 from 6:30 p.m. to 7:30 p.m. and at the Bangor Public Library on July 5 (the time to be determined). 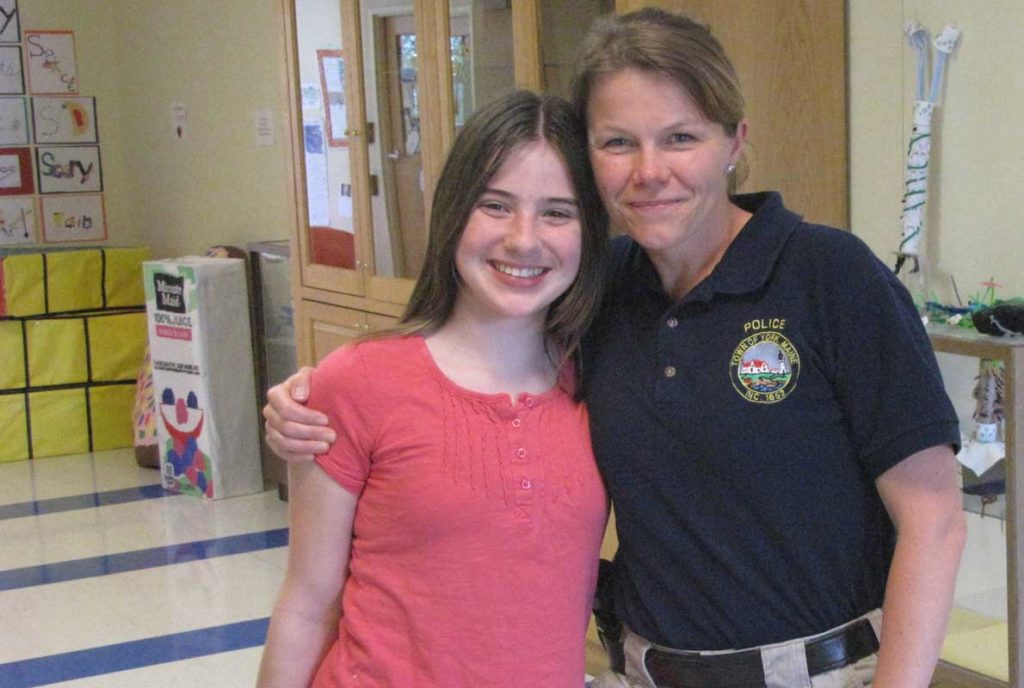