It was Amanda’s idea. She had seen the star on Mount Battie and thought North Haven should have one, too.

North Haven is going all out decorating the island to cheer everybody up in this long time of COVID fatigue, she thought. Wouldn’t it be great to have a bright shining star on the Knob for all to see? Her brother, Sam, agreed. Let’s do it, he said. 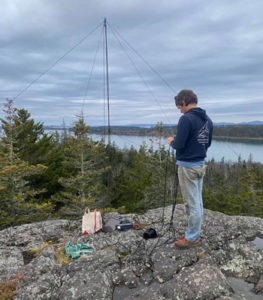 Sam sketched out the design, deciding to use rebar for the structure to reduce windage and allow for 360 degree visibility. Amanda researched and ordered the lights, two lengths of 100 bright white bulbs. On the Friday after Thanksgiving, they lugged 20 pounds of rebar, two boxes of bulbs, a bundle of rebar ties, a car battery, solar panel, timer, inverter, battery box, assorted tools, and about 200 feet of guy wire rope up to the top of the Knob.

There they assembled the 9-foot tall star clipped with the bulbs, rigged the rebar pole with ten guy wire supports attached to trees, bushes, and rocky outcrops, hooked the battery to the inverter, to the timer, to the solar panel, and finally to the string of bulbs, and then hoisted the star to the top of the 12-foot pole.

Maddie and Jessie lent a hand and documented the whole process. Maddie piloted her photo drone for perhaps the most dramatic pictures of the star’s first moments.

They weren’t sure how far away it could be seen, but were hoping, at least, that it would be clearly visible along the Ames Point Road, across Southern Harbor on the Crabtree Point Road, and from the ferry as it steamed up the Thorofare on its way home on the last trip of the day. They also weren’t sure if it would be bright enough or would stay powered from sundown to midnight each day, but they crossed their fingers that it would. 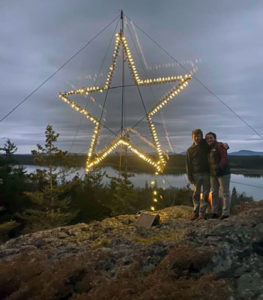 When it came on that first evening, a rather remarkable thing happened: just as their star lit up, so too did the Camden star on Mount Battie across West Penobscot Bay. They could see it clearly from their vantage point on the Knob. Two bright stars signaling the start of the holiday season, and they hoped, brightening the spirits of all who could see them.

So far, the star lights each night and has weathered 60 knot winds and torrential rains without blowing over or shutting down. Amanda, Sam, and Maddie have had to make some quick trips up the Knob to check connections, and once, to replace the battery because there hadn’t been enough sunlight to recharge it. And they are happy to report it can be seen from Crabtree Point to the shore of Vinalhaven and wherever the top of the Knob is visible on the island. Just what they had hoped. 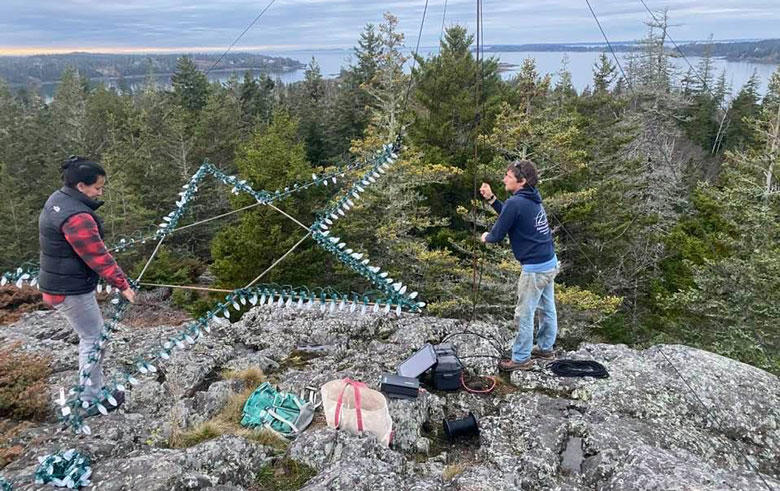