The first time Nick Record saw a North Atlantic right whale was in 2007. He was out on a boat in Cape Cod Bay with a guy named Stormy (seriously), when the water around them began bubbling and churning. Up through the water came a huge right whale (they average around 55 feet long).

“It’s a pretty amazing animal. Photos don’t do it justice,” he said.

Record, a senior research scientist at Bigelow Laboratory for Ocean Sciences in East Boothbay, presented the lab’s final Café Sci lecture of the summer on Aug. 13 on how a warming Gulf of Maine impacts North Atlantic right whales.

Protection of North Atlantic right whales, whose population is estimated to be around 400, is currently at the center of a controversial fishing regulation change proposed by the federal government.

The National Oceanic and Atmospheric Administration wants to reduce mortality and significant injury to right whales, such as caused by fishing gear entanglements and ship strikes, by 60 percent. To help achieve this goal, one of the strategies under consideration is for Maine lobstermen to cut their use of vertical lines by 50 percent.

Members of Maine’s lobster industry, which has already made changes to its fishing practices to protect whales, say there is no evidence that right whales are getting tangled in their fishing lines and that a 50 percent reduction in lines requirement would decimate the industry.

They are calling on regulators to do research, such as tracking studies and environmental studies of the Gulf of Maine, to clearly show how fishing gear from Maine fishermen impact the whales, and to base any regulations on that research.

Maine’s risk-reduction plan is due to NOAA in September.

Record, who is a member of the Atlantic Large Whale Take Reduction Team that advises NOAA on managing risks to whales from fishing gear, has been doing research that can contribute to a greater understanding of what is happening in the Gulf of Maine and to right whales particularly.

He has been studying deep water warming and how that impacts the Gulf of Maine’s food web. In particular, he researches how deep water warming trends effect copepods, a rice-sized crustacean that is a significant food source for right whales (and lobster).

In his Café Sci presentation, he explained that as circulation patterns of ocean currents change globally, the Gulf of Maine is getting warmer water at both the surface and far below the surface. These warming waters play havoc with the lifecycle of the food of right whales. Because of the disrupted lifecycle of copepods, right whales are not finding their primary food source in the places or in the abundance they once did.

“What we’re seeing is with the regular season pattern sort of breaking down, right whales are showing up in unexpected places, probably looking for food but not knowing where to find it,” he said. “As they show up in these unexpected places, they’re facing new risks because we haven’t been able to put protective measures in place yet.”

Determining just what those protective measures should be is difficult, he acknowledged.

“We depend on shipping for global commerce in general. We depend on fisheries for a lot of the food that we eat. So, it’s a complicated problem to figure out.”

Record said a variety of management practice measures will be needed. Among the potential solutions he thinks have promise is a forecasting system that uses computer modeling to predict where and when right whales may show up, which would allow for more targeted management practices.

In the meantime, it is critical that all (human) stakeholders work together, he said.

“We’re trying to balance our economic needs and our resource needs with our environmental needs,” he said. “We need as many ideas as possible. We need as many voices at the table as possible. Then there’s hope of finding solutions to these complex problems.” 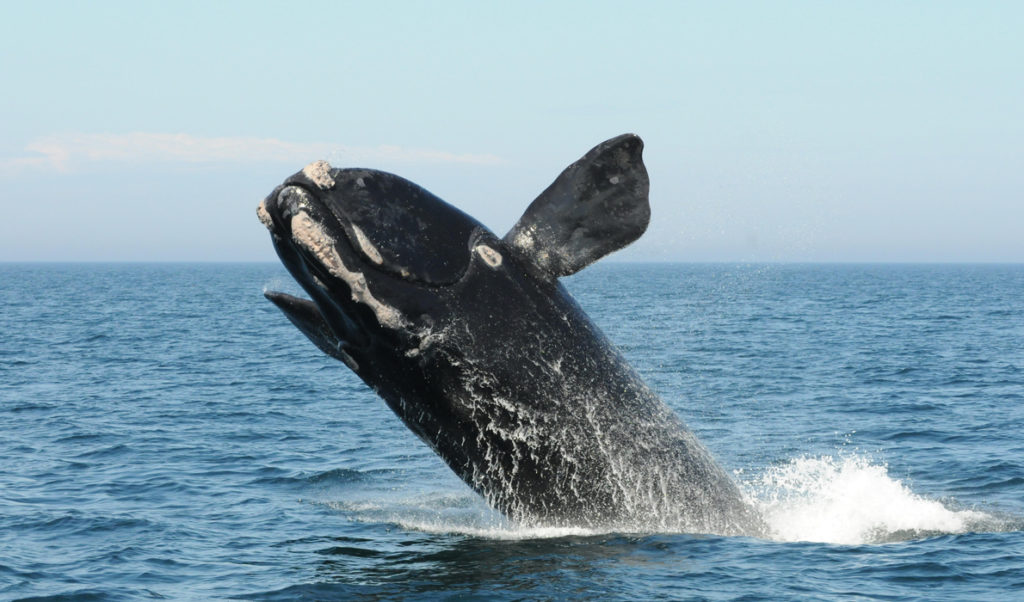 A North Atlantic right whale breaches in the Bay of Fundy.