Judy Coffin perfectly, and cheerfully, planned her memorial service and the reception that followed it. All that we her grieving neighbors, friends and family had to do was follow instructions. As she entered hospice, she announced to her husband Jack, “We are going to be happy,” and she set the tone for the rest of us: no long faces, no dread. She knew we would sadly miss her, but there was to be no ignoring the fact that she was dying.

One of our island’s most dedicated community members, Judy was deeply involved in the ambulance association, the Second Baptist Church, the library, and the Sewing Circle and many other organizations as well over the years, besides doing kind acts for friends and neighbors for as long as anyone remembers. She had fine taste, dressed impeccably, and was fun loving and always dignified.

Sewing Circle, of which she was a past-president and, as an exceptional seamstress, one of the most prolific members, often caters the memorial receptions for members. So one day, Judy sat down with our president Pat and laid out a menu and decorating scheme for the Fellowship Hall at the church. Floor length tablecloths with an overall blueberry pattern, blue, purple and deep red African violets in pots (so people could take them home afterwards) would decorate the tables. (She didn’t say so, but we all knew to drape white cloths on the Formica-covered center island, and over the piano in the corner where we always arrange desserts.)

Judy specified ham salad finger-rolls, made with a little onion and green pepper, roast beef finger rolls, egg salad finger rolls, deviled eggs, two or three kinds of olives, pickles, chips and cookies, bars, and brownies. She thought salad would be good to have. Pat read the menu to circle at a Tuesday meeting; as the winter hospitality chairman, I listened and thought, Judy won’t get to eat this menu, and maybe we ought to put together a sampler for her approval.

One day about a month and a half ago, I made some of each of the finger rolls, some deviled eggs, and, mulling over the salad suggestion, thought perhaps aspic would do nicely. I arranged it all on a tray and took it to Judy and Jack’s and they ate it for supper.

Mostly everything worked: Judy told fellow-circle member Kathy that she thought it might be a good idea to have some of the beef finger rolls spread with butter. “I like butter,” she said, instead of the horseradish and mayonnaise I had used. We knew exactly what to do.

It is, no doubt, unnerving for some of us to observe a friend candidly facing and planning for her own demise. We all—circle, minister, organist, husband Jack, companion and household helper Sharon—had our To-Do lists, written out by Judy. I think there was even a Not-To-Do list. Music, Bible passages, hymns, order of service, food and decoration all preordained.

When it seemed that a crisis in Judy’s health made implementing her reception a nearer possibility, we passed around our customary sign-up sheet at circle meeting. Some dis-consternation accompanied that: “She’s not dead yet.”

But we had a kind of holy duty to be very organized, and to honor Judy’s planning with our own. Out of the gathering came a recollection of a lemon molded salad that Ruth said Judy particularly liked and Ruth committed to bring. The sandwiches were a little undersubscribed.

A couple weeks later, when Judy’s journey ended, Jack came to circle to tell us all about her passing and to specify a date. Our group went into high gear.

“It’s going to be a big reception,” said Pat and several others. Judy came from an old island family, so there were many relatives, and her association with so many island activities meant many would turn out to honor her. Catering with no definite number of attendees produces a little anxiety, but it often occasions a loaves and fishes moment. As it did again, including one cook who used one of Judy’s own recipes, one for lemon cookies.

Judy was right: the blueberry print tablecloths, topped by Sharon with dark blue toile puddles around the violets, transformed the space. The white cloths elsewhere, a silver coffee and tea set to serve from that another circle member brought, silver and glass trays to lay sandwiches on, a tiered glass device for cookies, prompted one of the setup crew to observe, “It looks so like Judy.”

The food and the setting suffused the event with a wonderful, cheerful spirit. There was plenty to eat and drink, and family and friends took home the violets.

Sandy Oliver is a food historian who writes, cooks and lives on Islesboro. 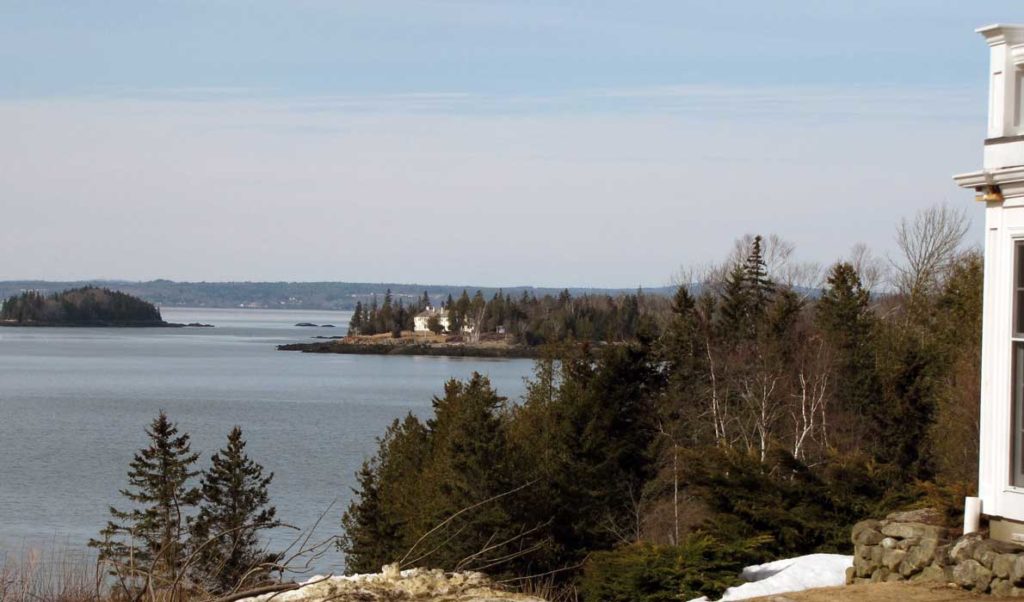