A piece of hardware smaller than a fist is all that stands between that beautiful sailboat, perhaps costing a couple of hundred thousand dollars, and devastating damage from a collision with the rocky shore.

Well, there is something else—someone else, actually—standing between that expensive boat and potential disaster. It’s Fields Dive Service, and the brother team of Dallas and Lucas Fields.

The business, which Dallas, 42, of Hope purchased from Rockport Marine 15 years ago, installs, maintains, and inspects 610 moorings in Rockland, Rockport, and Camden harbors.

On a sunny morning in early May, the brothers arrived at a pier in Rockland where the business docks its barge. The barge is more akin to a wooden float, powered by an outboard, with a gasoline-powered, former tow-truck winch mounted to its deck. 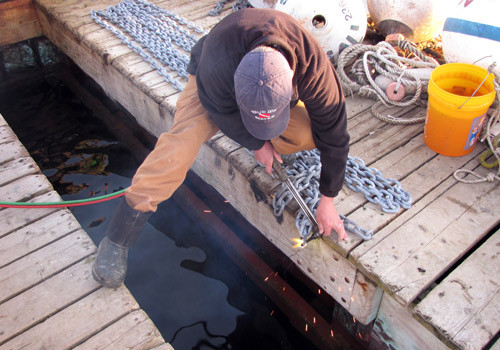 Dallas Fields cuts a length of chain with a torch.

The barge is designed with a slit through more than half its length, which allows the winch to haul mooring gear. It also is where Lucas, 35, of Warren, entered the water for his diving work.

At about 6 a.m., the men arrived at the pier, and wordlessly prepared for their work, readying air tanks, measuring lengths of half-inch chain, organizing the coils of new nylon line for the dozen or so moorings they would work on this morning.

Lucas changes his clothing just before the barge leaves the dock, putting on several layers, coveralls and two pairs of socks before donning a dry suit. Asked if the outer layer is indeed a dry suit, Lucas says, “Usually.”

Dallas laughs, and says when it’s not, “Those are the days we go home early.”
The water temperature is into the 40s now, warmer than when the men started their mooring work in late April, when the water was 38 degrees.

“He helps me,” Dallas says of his brother, “so I don’t have to get in the water every time. Diving on 600 moorings each year got tiring,” he said. A few years ago, Lucas got certified as a SCUBA diver.

In late fall, the business visits each mooring and retrieves the large white buoy with the boat’s name on it and attaches a small, yellow buoy to a length of line which is tied to one of the two chains that make up the mooring gear. The chain with half-inch-thick links leads to a much larger chain, which is attached to a slab of granite or concrete. The larger chain, Dallas explains, rarely leaves the bottom; a high wind might put enough pressure on the boat above to raise it, but generally, it lies flat.

In winter, the idea is to have both chains lying flat on the bottom to minimize wear that might come from sliding over rocks.

At each mooring—this day, we’re off Snow Marine Park in Rockland’s South End—Dallas engages the winch to pull both chains off the bottom.

Some customers have requested that the upper chain be replaced; a clipboard is consulted, and the change is made. In some cases, the need to replace the chain is obvious, and so the switch is made.

Chains generally last three or four years. At one stop, Dallas holds a new chain next to the one being replaced, and the difference in the thickness of the links is obvious. The galvanized surface wears off from sliding across rocks and gravel, he explains, and once it’s in that shape, the salt water quickly corrodes the metal.

Fields goes through about 6,000 feet of half-inch chain each spring.

When the barge stops and Dallas has winched up the chains, Lucas drops into the water and switches out shackles and chains as needed, and most importantly, inspects the connection to the mooring weight. Emerging from the water, Lucas reports on the status below.

Some of the mooring blocks inspected this morning are 20-plus feet deep, but in Rockport Harbor, some are 70-feet deep.

The men move around the barge quickly and efficiently—no wasted movements, few words.

Three or four times, Lucas indicates his hands are getting cold, and Dallas scoops hot water from a bucket that’s warmed by the winch motor and pours it into his brother’s gloves. In a wordless act that could only be described as brotherly love, Dallas also pours the steaming water over Lucas’ shoulders without having to be asked.

Fields charges $200 for the twice-a-year mooring service. Dallas estimates he services 80 percent of the moorings in Rockland and Rockport. Harbor ordinances in Camden and Rockport require annual inspections, and though Rockland only requires it every other year, Fields’ customers get the yearly check-up.

Dallas says the mooring work can become monotonous. The business website emphasizes that it will take on “ANYTHING you need done underwater.” One such job was hauling a tow truck out of one of Rockland’s quarries. Boat salvage, propeller replacement and boat bottom cleaning jobs round out the work. Overcoming the logistical challenges of such jobs is more rewarding, he said. 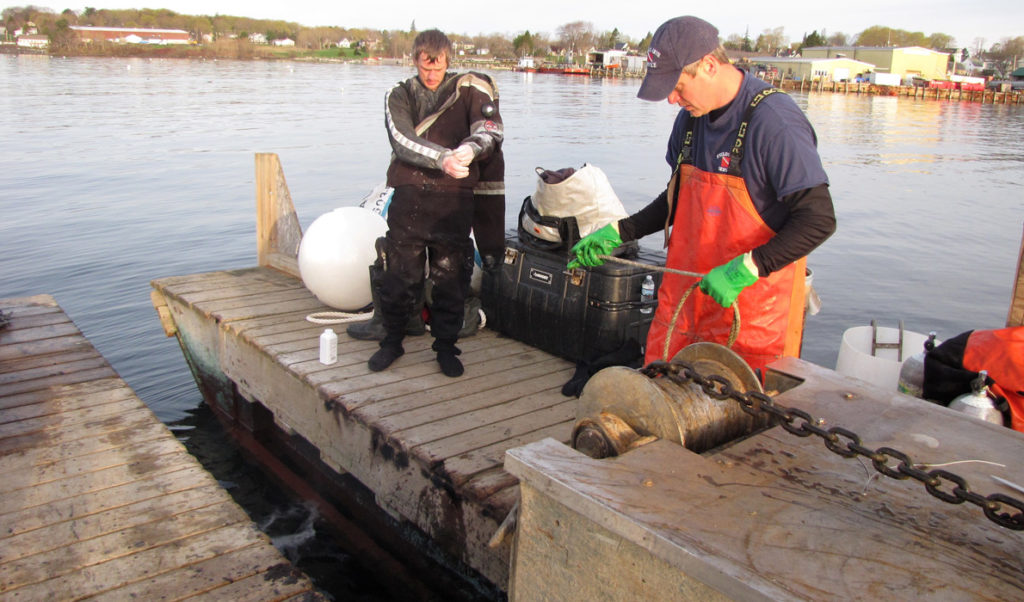