This book came out five years ago and was well received, so why review it now, when parts of it feel a bit dated? Two reasons: science gets out of date when it’s superseded by new research that either confirms what we knew already, or debunks it. Winchester’s careful discussion of climate change, written before 2010 when it still seemed prudent to characterize a warming world in tentative terms, has now been more than confirmed as the Arctic melts, the intensity of Atlantic storms grows and polar bears find fewer places to stand.

My second reason for reviewing Atlantic now is that I didn’t do so earlier. I’ve owned the book since it came out but hadn’t gotten around to finishing it. I’ll blame that on Winchester’s turgid style and a lack of deadline pressure from anyone else. Such are the excuses of the retired editor.

If anyone ever warned Simon Winchester away from a complex project, he didn’t listen. His earlier books include Krakatoa, a wide-ranging treatment of the 1883 volcanic eruption that killed thousands and affected weather worldwide; and The Professor and the Madman, the story of the creation of the Oxford English Dictionary. Oh, and of course there’s The Map that Changed the World, the story of the creation of the first country-wide geological map in 1815, which in turn played a hand in the founding of modern geological science. Winchester’s publishers list 16 other titles as well.

Atlantic is essentially a biography of the Atlantic Ocean, from its birth millions of years ago to the present—or, at least, to five years ago. Winchester covers every aspect of this globally important ocean one might think of, from the geologic forces that created it to the attitudes of early mariners who first ventured out on it, to the people who mapped it, to all of us who’ve relied on the Atlantic for centuries as a source of food and a means of transporting our goods.

There are the great battles, from Trafalgar to Jutland to the Falklands; there are the fisheries, from great whales to cod. There’s a lot about the Atlantic as one of the foundations of Western culture, particularly art, and about how attitudes toward this for-so-long unknown and little-understood sea shifted as we became more familiar with it.

Winchester seems particularly comfortable with marine science: “There is change and decay all around the sea,” he observes at one point late in the book. “On the very winter day I write this, yet another melancholy report of ocean-depleting news comes in: this time it seems that the rising acidity of some tropical ocean waters, supposedly caused by the solution in seawater of an excess of man-made carbon dioxide, is shown to be robbing certain fish of their sense of smell, rendering them unable to detect nearby predators. It’s not just that we appear to want to eat every fish in the ocean that we find appetizing; we also seem to want to give a helping hand to other fish-hungry monsters and thereby thin the population still further.”

I have mentioned this author’s style as a possible reason why I didn’t finish this book earlier. I don’t mean to imply that Winchester isn’t a good writer, because he is, but he does take some getting used to. Sentences are long; paragraphs are longer; ideas lead to more ideas and one is led, Lewis Carroll-like, down one hole or another. It’s all very entertaining and impressive, to be sure, but it can also be easy to put down after an hour or so.

When I picked up Atlantic again after a few years I tried to read it in a new way: begin a chapter, decide if I was really interested in the shape of the Atlantic during the Pleistocene Era, and if not, move on to the next chapter, which might be about Phoenician explorers or fishing technologies or air routes or battles. I know I’m supposed to read what’s put before me, but I’ve also given myself permission to skip over a few things. I trust Simon Winchester, who has surely dealt with better editors than me, will understand. 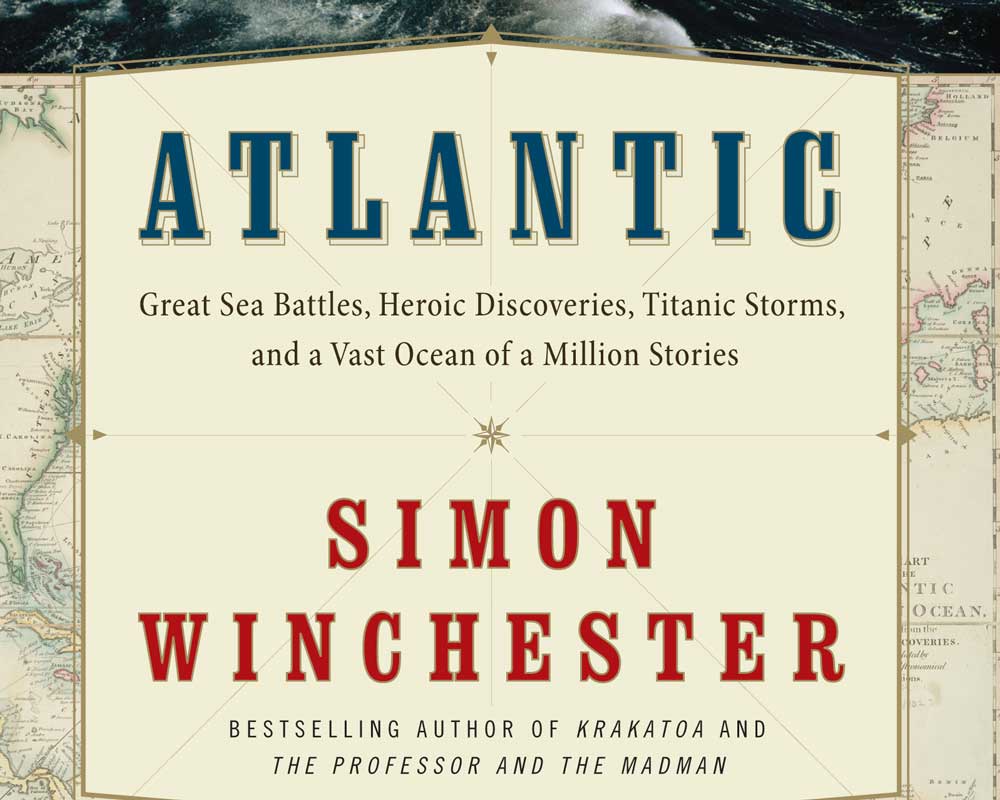