Ken Reiss’ new book, From The Beginning: Vinalhaven from 1760 to 1850, has given me a clearer sense of where I came from and, more importantly, how and why my ancestors chose this remote island to make a new life for themselves, why they stayed, how they survived, and why they bothered.

The author credits the ease of sea travel, which then compared so favorably with any alternative, for “how they came.” Why they came, why they stayed, and how and why they stuck with it are much broader topics.

From The Beginning, published by the Vinalhaven Historical Society, is a fascinating compendium of intriguing answers, each a testament to extraordinary resourcefulness and determination on the part of the early islanders. The broad and meticulous research Reiss has so obviously conducted into the settlers’ motivations, the mechanics of survival—bartering goods for services and vice versa, ocean commerce, farming—individual and community tenacity despite hardship and conflict, and the supportive foundation many found and relied upon in their individual families beautifully credits why and how and why they bothered. Many of our island friends and neighbors have surnames that have been here for centuries.

From The Beginning sheds a comprehensive light on these intriguing questions and does it in a way that thoroughly involves the reader, particularly if the reader is descended from these indefatigable and industrious folks. Those lives and the people who lived them were extraordinary and determined, and as the tangled web of relationships that we and our island ancestors have woven sort themselves out page after page, our admiration for them all grows. For we who have, with successive generations, become farther and farther removed from our island ancestors, our roots and common denominators are here in this fascinating and informative history over and over, chapter after chapter.

As dispute and warfare between major European powers over control of North America devolved into the practical logistics of contention for the northeast maritime environment, and for Penobscot Bay in particular, the intrepid settlers who had poked and prodded for opportunity in this archipelago during the decades prior to independence found a sustainable opening and seized it, but independence from the crown was tremendously controversial. The same division between loyalists and revolutionaries, between those who felt a kinship with the king and those who wanted to be free of him, which existed everywhere in the colonies, existed here among the islanders as well and the same conflict resulted.

Eventually the Fox Islands—North Haven and Vinalhaven—pursued cohesion with one another and then, overcoming the often fractious resistance of loyalists, sought and won independence first from the crown, then from Massachusetts. Interestingly though, circumstances eventually came full circle and the islands separated, for practical reasons, peacefully from one another.  From the beginning our ancestors and other settlers made this long process work and their spirited determination is why we are here now enjoying all we have.

Massachusetts attorney John Vinal helped islanders establish the validity of royal patents to island land and, later, in 1789, to incorporate the town. The story of his having assigned the two islands the name Vinalhaven, and then established his young son William on North Haven and then, to an enormous degree, on both islands, is a fascinating one.  “Squire” William subsequently became an important cog in the development of the two communities.

I’ve always felt as if I’d been here “from the beginning,” and now I know why. 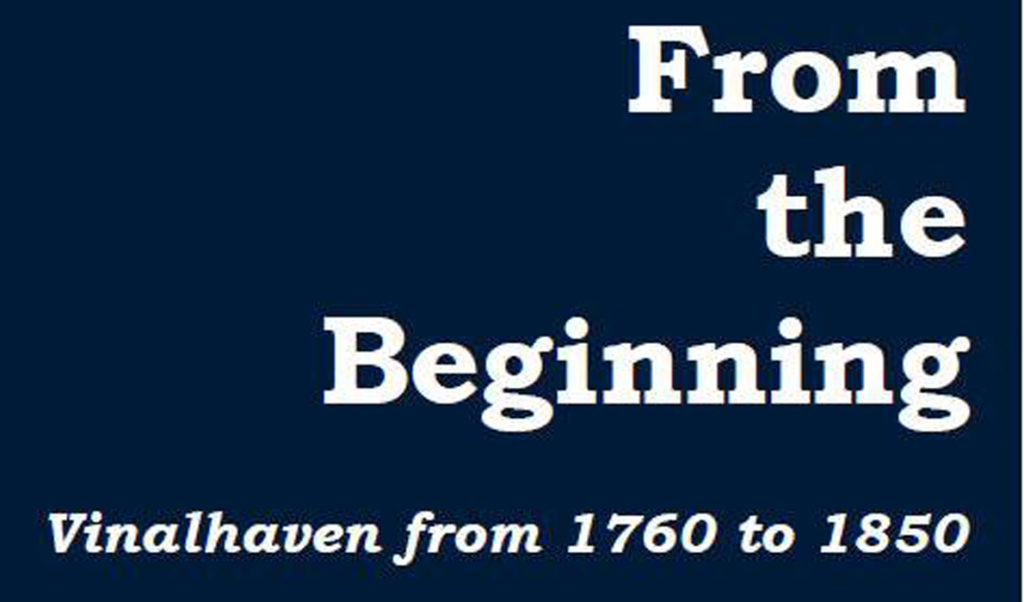