We’ve all admired half-hull models of ships and small boats. Some of us have wondered why and for whom they were made. Still fewer of us have asked how this seemingly arcane craft is practiced—how to transform a flat image, a set of plans, into a three-dimensional scale model.

Greg Rössel, an experienced boatbuilder, WoodenBoat School instructor, author, and half-model maker, has now written a book answering all of these questions and more: why boatbuilders traditionally relied on half-models, how to make them, and why a half-model is relevant even in the age of computer-assisted design.

He tackles the simplest question first: why a half- instead of a whole- hull model?

“Because the vessel (in most cases) is intended to be symmetrical (i.e. the port side is a mirror image of the starboard), one side would be all the builder would need,” Rössel states in his introduction, adding, “…not only would the model provide the yard loftsman all the information necessary to develop the patterns for the backbone and frames, but it also gave clients their first look at their new vessel.”

It’s the latter thought that gets to the heart of the matter. While a good set of paper plans may represent a design pretty well, it can miss what a boat will actually look like in three dimensions.

The differences between flat and three-dimensional representations are a recurring theme here. At one point, in fact, Rössel notes that naval architects sometimes distort a boat’s sheer to make it look “right” even if not quite accurate. “So what’s the deal,” he asks. “Why would a designer intentionally do this? Probably for sales … building a model that is built accurately to the lines is probably the easiest way (for the customer) to see what you are getting for a sheer.”

But if calling attention to distortion and possible designer hype is a role for a half-model, it isn’t the only one. Before computers, half-models were the natural way to transform flat representations into actual hull shapes. Conversely, a builder taking lines off an already-built boat can—using a system Rossel describes in detail—create a model, flat plans, or full-sized sections for building a reproduction.

As a how-to book, Half-Hull Modeling doesn’t disappoint. Early on, Rössel dives into tools, woods, glues, and other aspects of creating a half-hull. He explores station patterns, templates for waterlines and profile, expanding transoms from flat drawings, and the need for accuracy everywhere. He tells us how to mill stock to the correct thickness, cut out lifts (parallel to “waterlines” on plans that aren’t actually where a boat will float, but that’s another story), glue the lifts together using a jig, and cut out the model’s basic shape on the bandsaw without mishap or injury (using another jig).

There are plenty of photos and drawings to help those of us who can’t picture things.

Rössel really shines as a writer at such points, as for instance cutting the model’s sheerline:

“Approach with caution—especially as you’ll be cutting through the thickest part of the model. Also remember those screws … that should be short enough that the saw won’t cut through them? I always treat them as though they are an inch longer.”

From bandsaw work we move on to sculpture: using yet another jig to secure what can be an unwieldy object to the workbench, plus templates glued to card stock, the model-maker works the glued-up shape into something increasingly resembling a hull. It’s a process of planing, spokeshaving, rasping, and occasionally gouging until the templates fit their stations accurately.

Finally, Rössel writes in his usual engaging fashion, “it’s time to break out the fingernail emery (salon) boards … these boards can be purchased in cosmetic stores and finer drugstores. The purchasing experience is somewhat different from going to the hardware store, but the sandpaper grades are the same. And they are often colorfully decorated.”

There are discussions of decks, rudders, finishes, the use of contrasting woods, and even backboards for mounting half-hulls for display.

Speaking of display, Rössel is candid about one modern-day reason to admire, carve or own a half-model: “For many, the best reason for building a half model is simply to have an accurate, well-crafted rendition of their boat or one that they have admired…to hang on the living room wall.”

Rössel ends with a chapter on reverse-engineering: taking the lines from half-models and converting them into flat drawings, using a system devised in the 1930s by Bertram S. Booth.

“For today’s home builder, designer, modelmaker or historian, Mr. Booth’s straightforward measuring machine is hard to beat,” Rössel asserts. “It employs no micro-chips, costs little, is cordless, and works every time. Pilgrim, I can testify this unit works as advertised!”

Further details on half-model building, Booth’s machine, and the many other topics associated with this craft? Read the book—there’s plenty of good humor as well as good writing.

David D. Platt is former editor of The Working Waterfront. This review originally appeared in the November/December 2019 issue of WoodenBoat magazine. 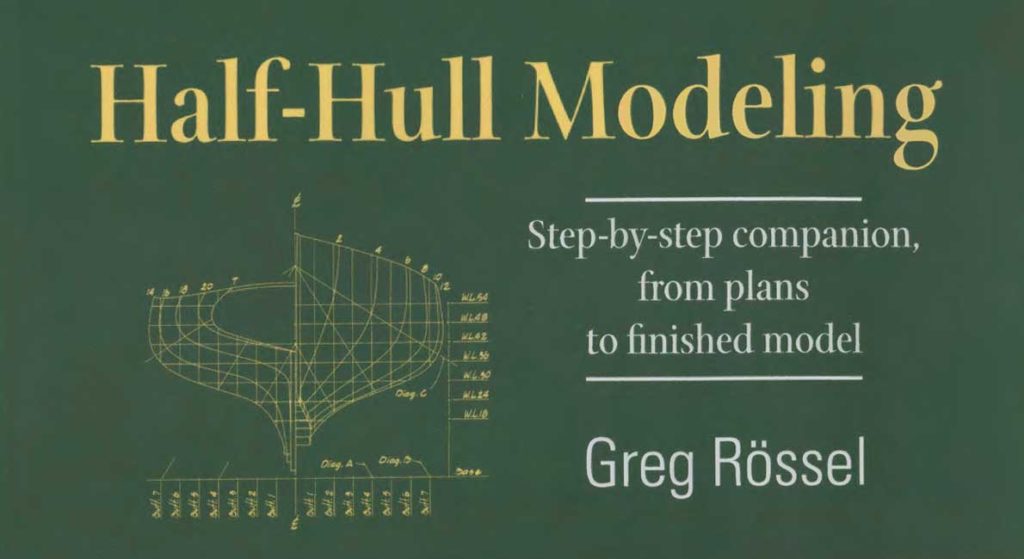