Oh, sure, the power will probably go out, for a little while anyway, so I suppose it would be a good idea to fill a few empty milk jugs with water for drinking and cooking, and I’ll put some in a spackle bucket for the ducks and chickens.

And it’s probably time to get the porch furniture into the barn so it won’t get blown off the porch, and the potted begonias will get beaten up, so bring them in. But really, how bad can it be? Surely we have been through it all before. You know what they say about windswept isles; just comes with the territory, right?

Whew. Monday morning, Oct. 30, to Friday afternoon, Nov. 3, at our house, no power, and right now on Sunday evening as I write, down long driveways and lanes there is still no electricity. But this old house and its cranky inhabitants proved to be fairly resilient for our few days reprise of the late 19th century, with recourse to few 20th- and 21st-century assists.

Our day’s rhythm changed. Following a much earlier, historical, pattern, we ate our main meal of the day sometime between noon and four so I could cook while it was light and then wash up dishes while I could see what I was doing. If we were hungry before bedtime, a sandwich, soup, crackers and cheese, or quickly heated leftovers sufficed.

After a couple days, I found that daily chores included taking water from the rain barrel up to the toilet for the inevitable nightly trips to the bathroom; refilling an enamel pot on the cook stove for dish water; topping off firewood just in case; checking lamps for lamp oil, and digging out the evening’s supply of candles.

With whatever time was left after cooking and clean-up, there was garden work, putting beets, carrots, and apples down cellar, and rescuing apples from deer who no doubt enjoyed the sudden bounty thrown down for them.

Indoors, piles of paper adorning our desks received long overdue attention. We both attended regular meetings, and I trotted off in search of email at public places or generator-assisted homes, though I kept wishing I didn’t need to check in with anyone.

I wrote some letters and notes by hand and put actual stamps on them; very pleasant. With dark encroaching at 5:30, we’d light candles and the lamps and read. At least one friend observed that knitting by candlelight was too hard for older eyes. True for me, too, alas. After a couple days, we found ourselves heading to bed quite early, by 8 or even 7:30, waking up at first light.

Because we cook on both gas and on firewood, there was never a problem of making meals, except for baking which requires our electric oven. The woodstove oven works at low and slow, but at its advanced age can no longer achieve biscuit temperatures.

There was no such thing as rummaging around through the fridge or freezers just to see what was there while spilling out valuable cold. I tended to dash and grab, based on memory or habit of location. Leftovers and perishables got first attention. Most days were too warm for woodstove cookery, but when it turned off chilly, I fired it up and steamed a tasty pumpkin pudding which served as cake for dessert.

The rain barrels stood us in good stead, but this business of electric in-well pumps strikes me as a little dopey. That needs fixing for sure. I don’t long for the days when running water was a person with two legs and a bucket, but I better find a way to back up that system. Thank goodness for our beloved privy which received some loving repair and care this summer and repaid us with its handy, attached-to-the-house location.

All week I thought about Adrianna Bunker, my predecessor here, and how she might have conducted her days, bringing water to her chickens, trimming her lamps, and sweeping her kitchen floor. Unlike her, I never faced the immensity of laundering, spring cleaning, or butchery without instant hot water, nor did I have to bathe in front of the kitchen stove.

And she managed without the help of a rechargeable LED headlamp or the wonderful solar-powered flashlights we acquired a couple years ago. She didn’t worry about what she’d have to do with freezers full of food at risk; on day four, our neighbor Terry boosted the cold in them with the loan of a generator. If I had to convert all that grub into canned, pickled, dried, or salted provisions, there would have been some kind of major scramble here. Do-able but what a pain.

Apparently, this storm took out power in more homes than the famous ice storm of 1998. If it happened more often, I might get pretty good at dealing with it. But I’ll tell you, after running hot water, what I’d miss most? My vacuum cleaner. 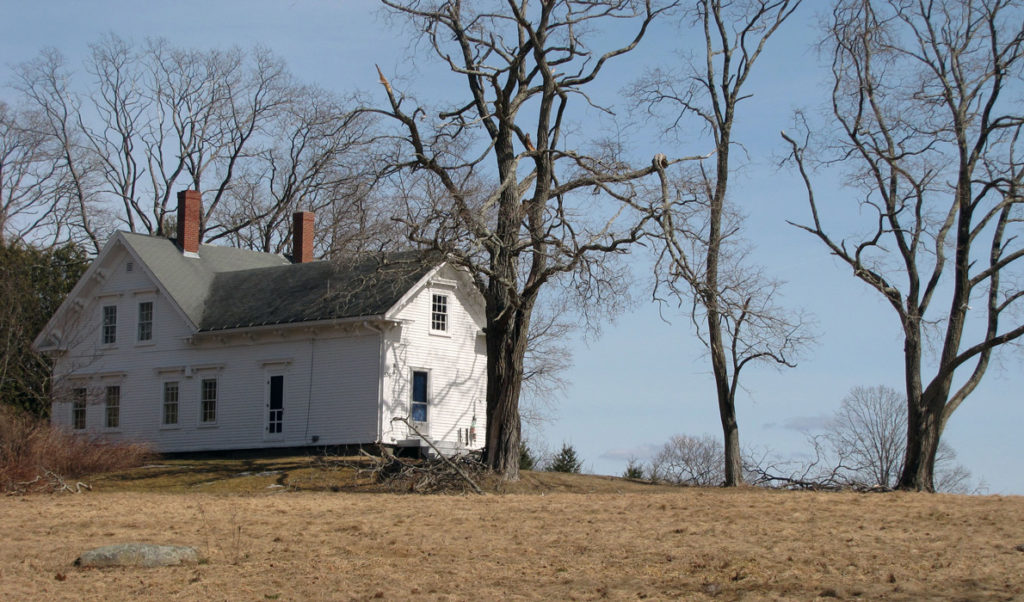 House on a hill on Islesboro.