A few weeks ago, a big man burst into the Tidewater Motel lobby mid-morning carrying a half-dozen unmarked white cardboard boxes, each about 18-inches by 18-inches and 4-inches deep. He’d emerged from an unmarked white pickup that held three white chest freezers in its bed, tied down haphazardly with pot warp.

He explained to several of us gathered there that these were Omaha beef products and that he’d come out to deliver them to the VFW only to discover that this was the wrong VFW or the wrong date or wrong order—something like that. He was so distressed it wasn’t entirely clear where the confusion lay.

He opened the boxes and displayed for our appreciation layers of vacuum packed sirloins, filet mignons, flank steaks, patties, etc. and offered them to us at deeply discounted prices.  He seemed so frantic to get rid of everything—clearly, otherwise, the loss was going to be on his head—that three of us agreed to buy a tray of each, an $800 value reduced to $600 and then again, he was so desperate, to $400.

He asked that we make the check out to Trish, the girl driving the pickup truck. Why that and the beat up old truck with three very unlikely chest freezers in the back didn’t seem strange to us, I really can’t say. Perhaps we were simply overcome by our own greed and perceived good fortune.

I tossed my goodies into my freezer and, later that day, triumphantly told my sweetheart about my shrewd acquisition. Instead of rejoicing, she suggested I read an article that had appeared that day in the Portland Press Herald which carried a warning from our state’s attorney general to be wary of door to door salesmen pushing what might be inferior cuts of meat. Alarmed, I went down to the bank to see if my check had been cashed. It had. The pair apparently took the checks to our local branch to be cashed immediately instead of taking them home to be deposited in a business account the next day and had, by then, left the island.

I called the Attorney General’s Office to alert them that two of those about whom we were cautioned had been on the island. I was referred to consumer protection (fraud division, I think). The very pleasant and accommodating fellow I spoke with knew nothing of the attorney general’s alert and, further, could find no evidence of such notice. He did, however, offer to see what he could find out and get back to me.

I provided the name of the woman to whom the check had been made out and her driver’s license number (the bank had the foresight I lacked). A couple of weeks later I was alerted by a mainland associate that the same pair in the same truck were on the first ferry of the day which had just departed the mainland minutes earlier.

I called the Knox County Sheriff’s non-emergency number to warn them so they could perhaps apprehend the duo as they disembarked on this side. The dispatcher told me he’d alert the deputy. An hour later, having seen the two suspects drive by my office, I called again. The dispatcher said the deputy was not on duty but would be back later that day. I reminded him that he’d promised to alert the deputy.

“I said I’d alert him; I didn’t say he was on the island,” he responded. I asked when he was expected. Quite long-suffering, he said he was not allowed to give that information out. 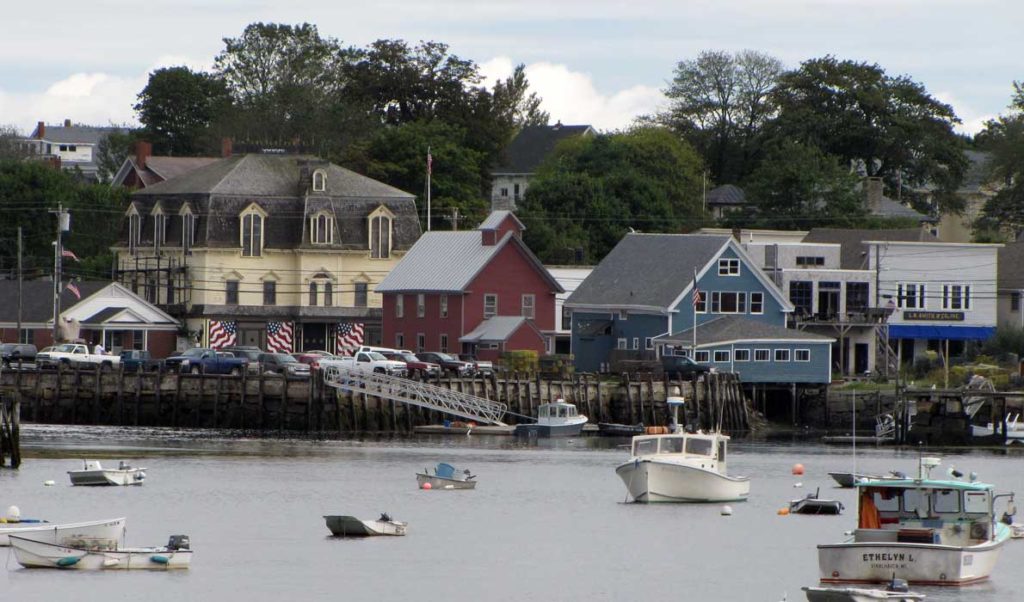 Vinalhaven village as seen from the harbor.