Abdi Nor Iftin’s life story is an inspiring tale of resilience, courage, and luck, and he will share it with an audience at the Hahn Community Center in Friendship on Sunday, Aug. 22 at 4 p.m.

His parents were nomadic herders in Somalia, but Iftin grew up mostly in the capital city of Mogadishu, where he taught himself English by watching American movies. As his country descended into civil war, he managed to survive violence, hunger, and oppressive Islamist rule. 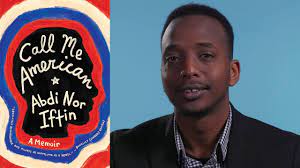 Eventually he and his brother fled to Kenya, where they endured more hardship. In 2014, against overwhelming odds, Iftin won the United States visa lottery and settled in Yarmouth. He has since become a U.S. citizen and the author of Call Me American, a riveting memoir about his experiences.

He has spoken to audiences across the country and been featured in stories by NPR, the BBC, the New York Times, the Boston Globe, and other major news outlets.

Iftin will read from his book and respond to questions. He will also sign copies of Call Me American, which is available in hardbound, paperback, and young adult editions. A limited number of books will be available at the Hahn Center for sale. This event is free to all, but donations will be gratefully accepted.

The Hahn Community Center is located at 31 Main Street in Friendship.