“Have you had a colonoscopy?” asked Owen, one of our health center’s physician assistants. I was in for a mild gastric complaint. I probably rolled my eyes. I explained how I was very skeptical of the need for such a procedure.

Having heard that so many of my peers were getting them, I cynically figured that having set up endoscopy units and eyeing a wad of aging boomers with elderly bowels, hospitals viewed colonoscopies as a new profit center. Plus there is zero, nada, no history of colon cancer in my family.

Owen acknowledged that yes, there was money involved, but recently with more consistent screening, colon cancer incidence declined noticeably. Since Owen recommended I get an EGD (camera down your esophagus to peer into your stomach and duodenum) I figured, oh, OK, I’ll add the colonoscopy. Yuk.

I faced a ferry line wait and an hour or so before the appointment. Lots of time to lose my dignity.

Now this column is supposed to be about food, cooking, and kitchens. But as we all know, the end of all meals is in our colon. From stove to plate to you know where. And I learned things in this process that you, if you face a colonoscopy, might be glad to know.

My education started with my retired-nurse-friend Derreth’s advice. She offered to drive me because they give you a general anesthesia (optional, by the way) so you really shouldn’t get behind the wheel when they send you home.

“No one is going to tell you this,” she said, “but when you go pick up the stuff to clean out your bowels, get a package of Depends. Because no matter what, you end up leaking at the end of the process.”

For those of us on Islesboro, it is perfectly possible to go off for the procedure and get home same day. If I lived farther out, I’d arrange to stay over on the mainland with a toilet nearby. But I faced a ferry line wait and an hour or so before the appointment. Lots of time to lose my dignity. I added “protective briefs” to my shopping list.

Along with the prescription for a weapons-grade laxative plus a requirement for an over-the-counter stool softener, the gastroenterology department sent me a multipage set of instructions for cleaning myself out, including a series of pictures of what the stuff ought to look like when it exits your system. The final picture showed a container with fairly clear yellow liquid.

A snag came when the drug store reported the prescribed laxative was unavailable. Gastroenterology advised a massive dose of an over-the-counter product I dutifully acquired.

Gastroenterology also sent directions for a “low residue diet” for five days before the procedure: essentially a white bread menu with no “seeds, nuts, salads, fruits, tomatoes, lentils,” no multigrain anything. In short, I had to avoid anything we typically eat around here.

Then the day before I was to eat a light breakfast—I chose an egg—then after that only drink clear liquids and nothing with red or purple dye. So white grape juice, broth, yellow Jello. Thank the Lord, I could have coffee with no cream.

I took my laxative in the last afternoon. My regularly irregular system responded sluggishly, delayed its appointed chore by about three hours, and performed intermittently. I spent a miserable night in the bathroom, putting summer clothes away, pulling out winter clothes, reorganizing the closet, and not sleeping.

By morning, exhausted, I peered anxiously at my product, observing that in no way did it resemble the clear liquid I was supposed to have.

Good thing islanders tend to know where all the mainland public bathrooms are. I visited each between here and Rockland. Thank goodness for the special underwear. I arrived very worried at the hospital, convinced I’d not be able to have my procedure, and told the doc that I wasn’t issuing clear yet.

The anesthesia gave me the best nap I’ve had in years. The minute they take you off it, you snap awake, well rested, and ready to roar. The doc helped himself to a couple of polyps he found in there, took pictures, which he gave me and which I do not plan to frame, of a pink and shiny Oliver interior, and said come back in five years.

Sandy Oliver is a food historian who usually spends her time gardening, cooking, and writing on Islesboro. She can be contacted at SandyOliver47@gmail.com. 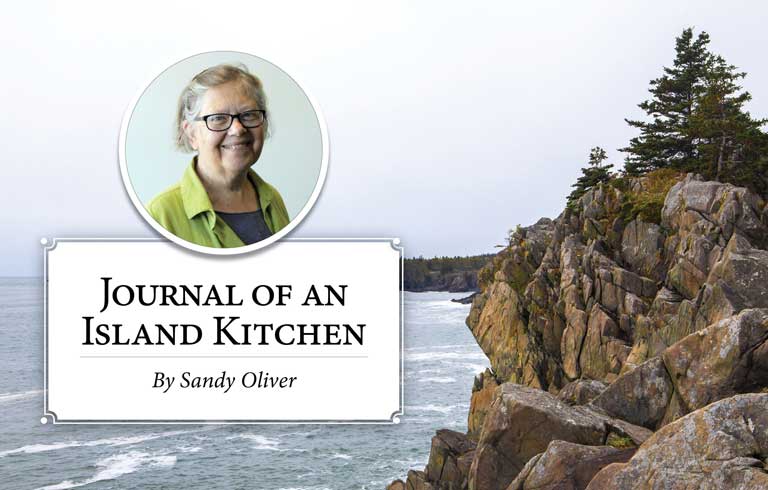