Standing onshore, we perceive the ocean as locality, the curve of the beach, the limit of the harbor, and as universality, the infinite inclusion beyond a distant horizon. We can look at the calculation of value in a similar way. We can understand capital as a monetized measure of value, in currency or bitcoin or corporate shares, established through an equation of research and production cost, price, and profit.

It is a calculation of the value of goods, and sometimes services, which is the lifeblood of our global economy—raw material things, built things, traded things—in a cycle of speculation and return. But this is a localized calculation, fundamentally circumscribed by what it leaves in, and, most importantly, by what it leaves out, factors that do exist, but beyond the horizon.

There is such a thing as “natural capital” and there is a growing movement to understand key missing elements in order to understand the true cost of things in the context of both financial and social outcomes; thus the true price we pay over time is suddenly inclusive of the cost of obsolescence, waste, irreplaceable raw materials, workforce health, and community impact on measures of human well-being.

Natural capital is formally defined as “the stock of renewable and non-renewable natural resources—energy, plants, animals, air, wind, water, soils, and minerals”—that must also be included in any benefit analysis of production, its actual cost, and its real consequence for human benefit worldwide, all now mostly overlooked and left out of the equation.

There is a growing movement, a natural capital approach, that is a means for identifying and quantifying natural resources and associated ecosystem goods and services, as well as a system of ecosystem accounting that is a statistical, numerical means to track the extent and condition of ecosystems affected by conventional investment.

Suddenly, we have the capacity to see beyond the horizon and understand the full integration of traditional capital and natural capital, just as we now understand an integrated economy, across the sea that connects all things.

One is a closed-circuit system, processing salt water from the adjacent harbor, filtering and extracting by-products for off-site disposal, proposed on the site of a derelict paper mill, bankrupted and abandoned as a result of market competition with the loss of some 300 jobs and serious decrease in property tax revenue.

Both are subject to strict and time-consuming municipal and state review for environmental permits. The first gets permitted and welcomed; the second is delayed and opposed by town residents fearful of the impact on ground water, aquifer supply, and effluent.

The difference can be reduced to value of social impact, the positive financial outcomes measured against the potential threat to a key natural resource. The second calculation under ecosystem accounting would have included the value of the potential loss, the devastating impact on the community of an over-stressed water supply, and the financials would inevitably be different even though the projects appear similar on the surface.

The second example involves the harvest of seaweed, where I live rapidly becoming a small-scale ocean-dependent business opportunity for new workers or for additional revenue for fishers during their closed seasons. Again, two approaches: one operated by a foreign company, providing a boat and tools to day workers, paid for maximum volume generated by cutting or scraping the weed near or at its base, limiting its rejuvenation and future growth; the other operated by individual fishers with their own equipment, again paid by volume but limited to cuttings no deeper that 16 inches above weed base, allowing for quick renewal and sustainable future harvest. Ecosystem accounting would incorporate the potential of continuing harvest in its analysis that would inform policy makers and regulators to prohibit one approach and encourage the other.

Water and weeds, enterprise and profit: locality sustained, universality expressed as policy and natural value as a new entry on the capital balance sheet.

Peter Neill is director of the World Ocean Observatory, which produces weekly radio essays heard on WERU-FM, 89.9, on podcast at apple.com/us/podcast/world-ocean-radio/id425361249, and at http://www.worldoceanobservatory.org/world-ocean-radio. He lives in Sedgwick. 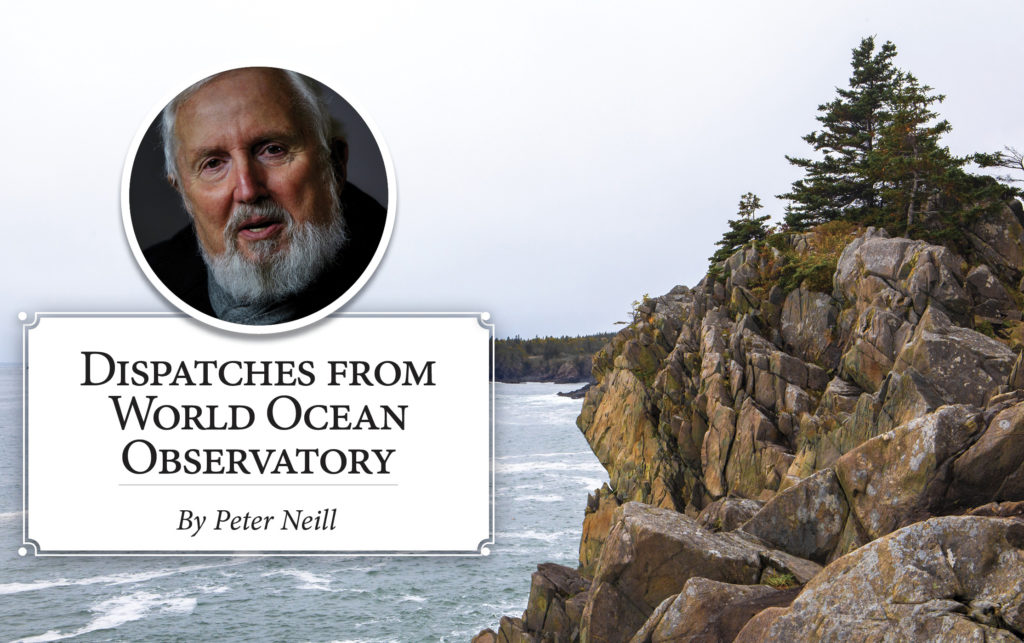