If investment is risk, then insurance is a means by which to diminish the damage from unforeseen events, liability, and damage to come. And then there is re-insurance, the insuring of the insurers so that they, too, have coverage to mitigate further the consequence of claims to be paid.

It seems complicated, and consumer understanding of insurance is a challenge, a surfeit of fine print we don’t often read until an accident forces the application of terms and payments upon us in the context of distress and need.

But, actuarily, insurance is a simple equation: consumers pay premiums to companies that hold and invest those funds profitably until an untoward, actual event demands payments of claims, usually cumulatively, less payment outflow than premium inflow, generating profit for the company and its shareholders. The risk is further diminished by those companies insuring their risk in a similar exchange with the re-insurers and, in some cases, through government subsidies and reimbursements. Thus, it can be argued that insurance investment is no risk at all.

Could funds be directed to infrastructure improvements in areas of high risk?

The whole system is based on recovery or restoration from the consequence of risk and has become an integral part of protection against the probability of unforeseen challenges to personal health and injury, workplace compensation, property destruction, and liability claims that are adjudicated with penalties, or often settled, through lawyers or courts.

We are required to purchase insurance, by law or by a need to avoid financial disaster by tort, legally defined as “an act or omission that gives rise to injury or harm to another and amounts to a civil wrong for which courts impose liability.”

In the United States, we live in a “tort storm” of claims, an integral part of our social/financial culture managed and sustained by a for-profit industry.

Let’s take an ocean example. If you live on the coast, or inland in a floodplain, you are vulnerable to wind, rain, and wave from powerful storms alongshore. If your home is directly on the beach, you have coverage through the U.S. Federal Emergency Management Agency, the notorious FEMA which manages evacuations and protections and provides government-subsidized insurance coverage for rebuilding. U.S. taxpayers underwrite those costs over and above whatever coverage the homeowner may have.

In some cases, areas and individual properties have been restored several times over in the same locale by this federal insurance program.

Is it possible to conceive insurance another way? Instead of event restoration, could insurance be designed around risk prevention, where premiums are invested in systems that anticipate certain conditions in advance and finance protections that obviate the predictable damage, reduce disruption, and aggregate to larger strategies that reduce the overall cost of serial events?

For example, FEMA has mandated that waterfront homes destroyed by storms be reconstructed at floor levels higher than historical or anticipated storm level rise, to apply such protections before rather than after the event. Could such requirements be built into zoning and building codes for vulnerable areas?

Could bank loans be approved only when such risk protections are built into home or business loans? Could funds be directed to infrastructure improvements in areas of high risk that will adapt more effectively to anticipated conditions—erosion protection, drainage directions, catchment basins, raised bridges and roads, restoration of natural shoreline barriers—all proven defenses paid for in advance of the cost of any single event or more financially recurring, debilitating events in the same area?

Could insurance companies invest their premiums in novel financial instruments—stocks and mutual funds, bonds and venture technologies and products—with climate-mitigating goods and services? Could those companies become agents of change, maintaining their essential purpose, not only through retro-action, but also pro-action that prevents or diminishes more predictable, destructive, and expensive outcomes?

Insurance companies are solid, stolid, and fixed in their construct and behavior. The industry has worked well for many years of quiet profit, but like all such institutions these days, they are at risk through complacency and sufficiency and convention. Why would a re-insurer allow that to endure? What happens when events insured become so constant and devastating that there is no profit after all? Why would government accept such uncertainty and mandate response as, yes, an insurance policy against failed insurance? Why risk it?

Peter Neill is director of the World Ocean Observatory, which produces weekly radio essays aired on WERU-FM, 89.9, on podcast at apple.com/us/podcast/world-ocean-radio/id425361249, and at http://www.worldoceanobservatory.org/world-ocean-radio. He lives in Sedgwick. 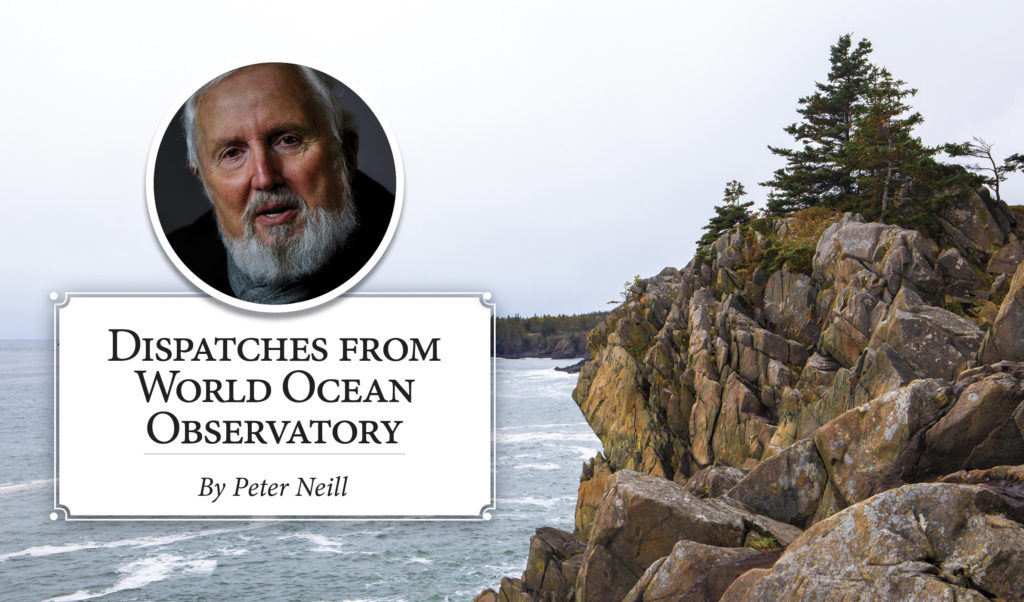