On October 9, 2009, although not despondent, I stood on the Dyer Island Bridge, staring into the modest abyss below and torn between stepping off or returning home. After a while I did; I stepped off.

Vinalhaven is the largest island in Maine’s Penobscot Bay, surrounded by bits of ledge and dozens of smaller islands. Four of the latter are bridged to the mother island, as it were, not unlike four pets, each on a leash perhaps, and Dyer Island is the smallest of those.

Fifty years earlier, 1959, September, I’d sat in the same spot consumed by the sweet anguish that is the agreeable companion of adolescence. It was the day after Labor Day and Karen, a summer girl and the first serious object of my affections, had just left her July/August lodgings here on Vinalhaven and returned home to Massachusetts. Before leaving she suggested we see others during the coming school year, an exercise she said would illuminate and freshen our relationship, give it context, and make it easier to assess our feelings when she returned the next summer.

She often employed such transcendent intellect and the resulting assessments left me nodding in apparent acquiescence when in fact I was stupefied. On this occasion I was no less and only knew this was not the promissory parting I’d hoped for. Rather, I was consumed by the image of better-looking guys back in Massachusetts, guys who could dance effortlessly and who could make-out without biting her lip or otherwise inflicting injury.

Despondent, I sat, that day, in my Dad’s old pickup, wallowing in angst.  In the ocean water below I saw a school of minnows trying but failing to breach the current. I felt their hopelessness.

On this day, fifty years later however, I’d just returned from some business on Dyer Island and stopped on its side of the little single-lane bridge to let an oncoming vehicle come across. While I waited, I remembered that anguish and recalled that I was parked then in precisely the same spot I found myself now.

After the other car passed, I tried to comprehend that 50 years had gone by. I couldn’t. I still can’t today.

I don’t understand how the passage of that much time can go un-noticed. I’ve seen other lives run their course and expire but never thought seriously mine would be one of them. I have simply not reconciled myself to aging.

I looked down at my right wrist where, in 1963, Karen and I having lasted longer than I’d once thought possible, I’d ill-advisedly had her name tattooed there one night after boot camp. It is a lovely tribute to that early romance, her name wafting on a banner held aloft by an eagle and is a particularly nice touch each time I extend my arm across the dinner table to accompany an expression of affection to my wife. Unable to get my mind wrapped around that much time having simply passed away, I retreated to the present.

This, the Dyer Island Bridge, is one of eight bridges on Vinalhaven. It’s made of granite, of course, as are (or were initially) the other seven. A demand for Vinalhaven’s particular pinkish grey granite drove a tremendous quarrying industry here in the hundred years following the 1820s.

During that time, Vinalhaven supplied stone for mansions and monuments and government buildings all over the United States. The island also provided structural granite, including stone used to construct Civil War gun platforms during that conflict and, in New York City, the massive columns for the nave in the Cathedral of St. John the Divine as well as much of the stone supporting the Brooklyn Bridge.

Having singled out New York, there exist these interesting asides. Each island comprises about 23 square miles and each has eight bridges.

These similarities notwithstanding, there’s no denying some distinctions. We harvest a more appealing lobster here in the clear, cold waters of Penobscot Bay than can be found in the East River. We can always find a place to park and we all wave to one another and to visitors more frequently and with more fingers than New Yorkers do. 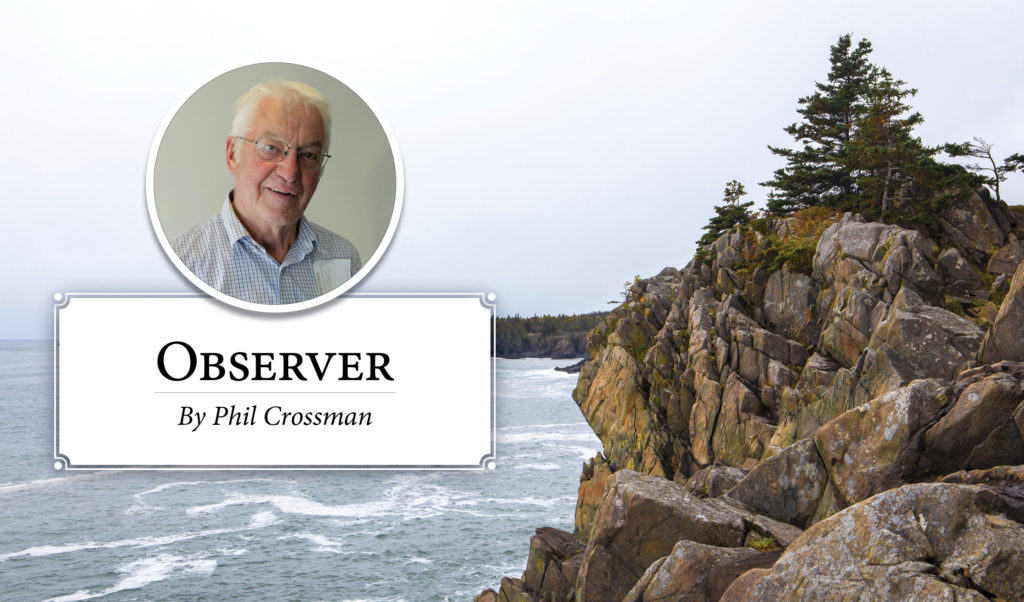