When Australia lit up with wildfires and 105-plus degree temperatures, we could ignore the consequences of global warming—it was half a world away. When California, Oregon, and Washington lit up with record breaking wildfires, air temperatures that reached 120 degrees, and unhealthful drift smoke that reached Maine, the consequences of global warming are harder to ignore.

When our TV screens show us the huge degree of glacial snow melt in Labrador, and a Bangor Daily News webinar points out that Gulf of Maine air and water temperatures and thus sea-level rise are among the highest in the world, only the most obtuse climate change deniers fail to realize that sensible steps to deal with climate change must begin now.

These naysayers profess to be concerned with climate change but refuse to take an important first step—reducing New England’s dependence on fossil fuels—thereby reducing global warming. It’s somebody else’s problem.

The arguments of those opposed to the project run a wide gamut. Why should we help Massachusetts? There’s not enough in it for Maine. What about our deer, brook trout, and pristine forests? Why are we kow-towing to foreign corporations in Canada and Spain?

None of these arguments hold up when examined.

We’re not helping Massachusetts, we’re helping ourselves. We’re in the same boat when it comes to climate change. Moreover, Massachusetts is bearing the capital costs ($1 billion) of the power line. Maine gets a better grid system, the construction jobs, the annual increase to the tax base, a slice of the power at a reduced cost, and enhanced broadband hookup serving rural areas of the state. In short, the state’s public advocate, Barry Hobbins, and the governor’s office have not let Maine people down.

As for wildlife and pristine forests, leading Maine wildlife and forest experts—such as Tom Rumpf, Lloyd Irland, Richard Anderson, and Richard Barringer—have stated at hearings, public gatherings, and in op-eds that populations of deer and other wildlife, brook trout, are not at risk. And that relatively minor harms are more than offset by DEP conditions imposed on CMP that enhance the overall condition of wildlife in the area.

And pristine forests are a myth. Forests in the unorganized territory, certainly in the area in proximity to the project, have been cut and re-cut many times. Hundreds of miles of woods roads parallel and cut across the power line right of way. They have existed for decades.

Finally, there is no kow-towing to foreign corporations. CMP is in full compliance with Maine law. The multiple approvals by the Public Utilities Commission (sustained by Maine’s highest Court), the Department of Environmental Protection, and the Maine Land Use Planning Commission all attest to this fact. These regulatory bodies and their professional staffs can’t all be wrong. To impugn their integrity should be beneath us.

Moreover, why are critics bashing only Avangrid and Hydro-Quebec? We have welcomed, lived with, and benefitted from Irving Oil and the Emera Company for decades, to say nothing of dozens of smaller Canadian companies, millions of Canadian visitors, and aquaculture firms rooted in Norway and Denmark.

In short, the critics need to get real. Their narrow view of environmental harm ignores the larger reality. Global warming and climate change pose problems that must be faced. Fossil fuels are killing us. Bringing Canadian green energy into New England benefits all of us—it is a first, a small step in the right direction.

Orlando Delogu is an emeritus law professor at the University of Southern Maine Law School, and he has served on the Portland City Council, Portland Planning Board, and Maine Board of Environmental Protection. 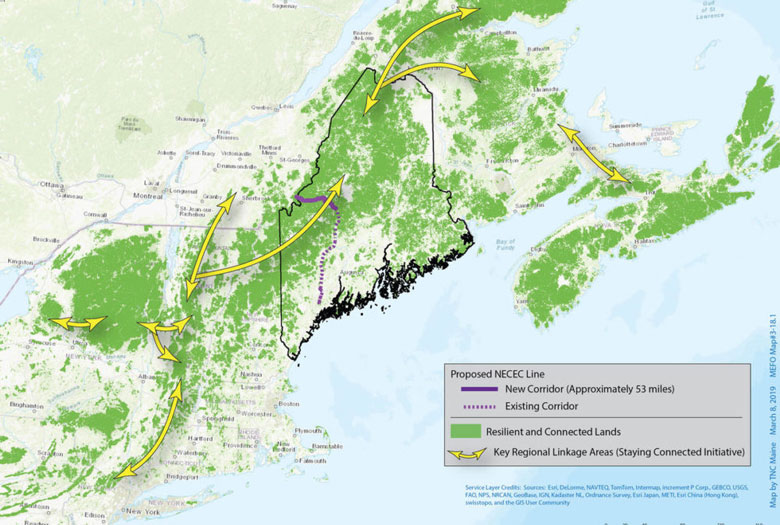