As council member Ivan Fernandez remarked during the public release of the report that the five hottest years in Earth’s recorded history were the last five, the temperature in a number of communities in Maine had hit 60 degrees. On Dec. 1.

When Gov. Mills convened the council in September 2019, she announced an executive order to make Maine’s economy carbon neutral by 2045. The council’s plan is titled “Maine Won’t Wait.”

“The changing climate affects all of Maine’s economic sectors, from tourism, to agriculture and forestry, to trade.”

“The indicators of climate change are accelerating and so, too, must our response,” he says.

That’s some of the bad news.

The good news, he says, is that the council knows what needs to be done. The Maine Climate Action plan lays out a pathway.

The path includes investing in renewable energy, harnessing natural climate solutions to store carbon, and building resilience in farms, forests, and fisheries to survive and thrive in the 21st century.

“We have seen time and again that science-informed policy is cost-effective for American society,” Fernandez says.

Fernandez, who also co-chairs the council’s scientific and technical subcommittee and serves on the Natural and Working Lands Working Group, says it’s important that “we invest in the future rather than in the past. This is guidance to do that.”

Sean Birkel, the Maine State Climatologist and a research assistant professor with UMaine’s Climate Change Institute and School of Earth and Climate Sciences, serves with Fernandez on the scientific and technical subcommittee.

Birkel, who developed the Climate Reanalyzer, says there’s clear evidence of climate change in Maine during the past century, especially the past 20 years. “The changing climate affects all of Maine’s economic sectors, from tourism, to agriculture and forestry, to trade.”

UMaine and University of Maine at Machias President Joan Ferrini-Mundy says that faculty, staff and students will continue to address complex challenges of local, national and international significance — including climate change — with research-based knowledge.

Ferrini-Mundy also notes the UMS Research and Development Plan FY20–FY24, UMaine’s Strategic Vision and Values: A Framework for the University’s Future and the $240 million investment by the Harold Alfond Foundation in the UMS TRANSFORMS initiatives align with findings in Gov. Mills’ Economic Recovery Committee report that call for innovation, entrepreneurship and talent development and attraction.

“We take seriously our mission to improve the quality of life for people in Maine, to build economic prosperity, and to promote responsible stewardship of human, natural, and financial resources,” she says.

Habib Dagher, executive director of the UMaine Advanced Structures and Composites Center, calls this day a historic one for the state.

“Following two decades of research and development, we are ready to leverage Maine’s vast offshore wind and wood resources to fight climate change and strengthen our economy,” he says.

“Our leading research programs in deepwater offshore wind and bio-based additive manufacturing create pathways for the state to achieve the strategies outlined in the Climate Action Plan, including ambitious emission reduction goals and the development of sustainable energy and Maine forest products. What we have discovered is that not only are these goals achievable, we can do so while lowering long-term energy costs and creating good-paying jobs.”

Gayle Zydlewski, director of Maine Sea Grant, says the Council’s work is critical for the sustainability and resilience of the state’s coastal communities and ecosystems. Climate-related changes are already threatening valuable wild and farmed fisheries, along with the marine heritage and cultural identity of coastal communities.

“Based on our work with coastal communities, the seafood industry, and statewide coastal energy and infrastructure planning initiatives, we understand that the cost of not advancing these efforts will far outstrip the cost of making what changes we can make today to help communities and industry mitigate and adapt to the challenges of climate change,” she says.

Maine Sea Grant, Zydlewski says, will continue to engage with the Council, state and Legislature and its partners on climate change strategies moving forward, and is available to provide technical expertise and help support outreach and education efforts.”

Dan Dixon, UMaine’s sustainability director and a research assistant professor with the Climate Change Institute, says Maine, and the entire planet, is in the midst of a rapid climate change event caused by unchecked emission of fossil carbon into Earth’s atmosphere.

At UMaine, he leads efforts to reduce the environmental footprint of the campus through energy-use reduction, energy-efficiency improvements, composting, recycling, eliminating waste, and sustainability education and outreach. UMaine is a charter signatory of The Carbon Commitment, which is focused on reducing greenhouse gas emissions and achieving carbon neutrality as soon as possible.

“My hope is that people who’ve been involved in the work will stay involved, and those that haven’t yet had the opportunity, read and hear about what the Council is recommending and find a way to make their perspectives heard and contribute to the work ahead.”

Jonathan Rubin says a thoughtful approach to change is key. He directs the Margaret Chase Smith Policy Center and is a professor in the UMaine School of Economics. He serves on the Transportation Working Group and Scientific and Technical Subcommittee.

“The idea that it’s cheapest to do nothing is simply not true,” says Rubin, who specializes in climate change economics, including transportation energy and economic mechanisms to help attain environmental goals. It’s important to balance smart regulations that both reduce damage and position Maine’s businesses to be in sync with other businesses across the country and world, he says.

Tora Johnson, who directs the GIS Laboratory and Service Center at UMM, says climate adaptation and mitigation will be beneficial for citizens’ well-being and the economic health of the state.

“If we go about business as usual, the green economy will pass us by,” says Johnson, a social scientist who focuses on climate resilience and adaptation in rural communities.

And the costs of doing nothing will pile up. For instance, if a vulnerable wastewater plant fails, the waste that pours into a river and estuary threatens the health of people, the river, clams, and jobs.

People and society can change fast, he says. “COVID has shown that. If we put a price on carbon, a lot can change quickly. I am optimistic.” 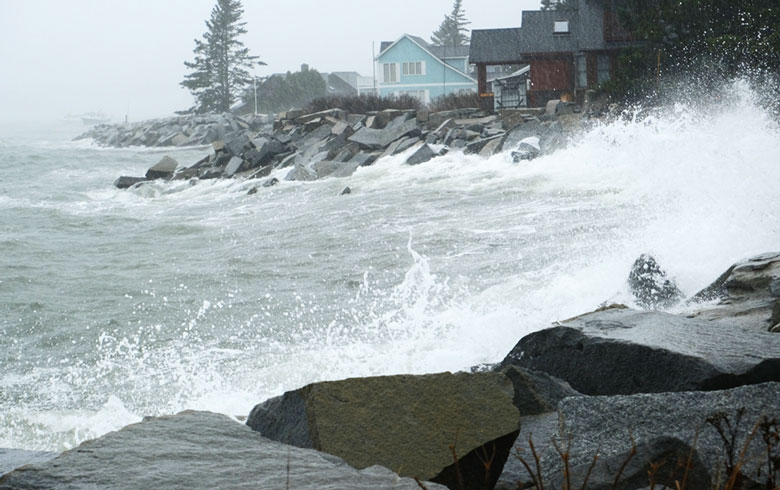 Carla White of South Thomaston shot this photo in Spruce Head of waves battering the shore on Tuesday, Dec. 1.