Students, staff, and visitors to North Haven Community School are greeted by a new, impressive sight when they enter the school grounds: a 26-foot minke whale skeleton, mounted in a spruce timber frame. 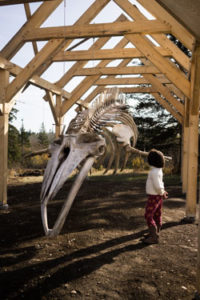 The display is the culmination of a years-long project, begun in 2016 when the already dead whale washed up in Wooster Cove. Community member Chris Koerber worked to “flense” the carcass, as the process of slicing the flesh is known. Permits were secured to allow the school to keep the skeleton and bury it in the state sand pit, where it was excavated a year and a half later by a team of students, staff, and community members.

Students worked under science teacher Lisa White to secure grant funding, clean the bones, and learn articulation techniques from Dan DenDanto of Whales and Nails, affiliated with Allied Whale. In the 2019-2020 school year, work continued through an extracurricular science club, also led by White, and in February, Vinalhaven timber framer Dylan Jackson led a week-long community workshop to begin carving the spruce pavilion in which the skeleton would hang.

Less than a month later, all progress on the whale and timber frame ceased as the pandemic closed the campus through the end of the school year.

When in-person schooling resumed in September, the high school staff and administration were faced with two questions: how to provide students with a fall expedition during a pandemic, and what to do with the whale, which seemed no more than a pile of bones in the projects building.

Staff and administration quickly decided to combine the two.

I drilled holes in the vertebrae, I made the little fingers, and assembled the flippers together…”

“We were unable to plan for our traditional fall field study event due to COVID and changes in leadership, to be honest,” said secondary teaching principal John Dow. “The staff decided that it would be an excellent opportunity to finish this project since we were in place anyway and this would be a terrific chance for the kids to work with outside experts, radically change the face of our campus, and to contribute to the community.”

DenDanto and Jackson agreed to return to campus for the week to support the completion of the skeleton and timber frame, and staff and students began planning. 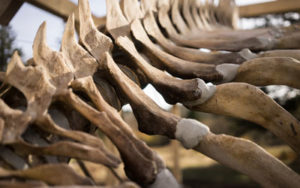 A traditional fall expedition includes opportunities for student leadership with tasks including cooking, cleaning, and navigating, and opportunities for socializing and collaborating outside of the school environment. To try to capture some of these elements, staff and students planned to cook meals for the week outside on the school’s grill, work in shifts to photo-document the process, and hold a beach pizza party and campfire to celebrate the end of the week.

Once Whale Week began on Oct. 19, DenDanto quickly trained students on a number of tasks, who did the hands-on work.

“I drilled holes in the vertebrae, I made the little fingers, and assembled the flippers together,” said freshman Bryn Campbell. “I attached the breastplate to the whale and drilled and attached chevron bones.”

Classmate Milo Bernard drilled out ribs and helped attach the mandibles to the whale’s upper jaw.

Freshman Abby Lattimer and sophomores Isabelle Haskell, Sophie Hansen, and Sofia Stockwell focused on the whale’s spine, including building a rolling cart to support it and adding foam, epoxy, and clay to the intervertebral spaces, and assembled the whale’s hyoid bones. Hansen also worked to attach various small bones to the whale’s skull.

For some students, the timber frame held an irresistible allure.

“It was fun to use the big hammer and smack things together,” said freshman Bret Waterman.

Sophomore Henry Sandelin agreed: “This was like big Legos!”

Waterman and Sandelin said they learn best when working with their hands, and spent most of the week helping Jackson, as did senior Annabell Hurd.

“I did a lot of work on the timber frame, and I also learned how to use the rock drill which was my whale week highlight,” Hurd said. 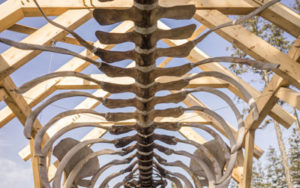 Timber framer Jackson appreciated the students’ enthusiasm and work ethic. “I wish every job was that easy to do, to stand there and just be like, OK, we need to move this thing from here to there,” he said. “We also got the footings set with Annabell’s help. She really did it like an expert, the first thing she said was, ‘Are you confident that I can do this?’ and from that point forward she was like, ‘What do I do?’, and I explained the steps, and she wasn’t out to prove anything. I wish I could hire workers like that,” he said.

Students had the opportunity to work with other tradespeople in the community. Noah Davisson and Roman Cooper, both North Haven Community School alumni, helped out at the timber frame site, moving and spreading fill with student help, and lifting the trusses with a boom truck so they could be attached to the base structure.

Friday morning, after four days of sustained work, students rolled the spine from the projects building to the timber frame on a cart of their own design and construction. The skull was carried out on a wooden frame shortly after, and students screwed eye bolts into the newly-erected trusses so cabling could begin. DenDanto and a crew of volunteers completed the installation that afternoon and added the finishing touches, such as the hyoid bones and vestigial pelvis, Saturday morning, right on schedule.

Students share a sense of pride and accomplishment in the whale and timber frame.

“I’d say it’s really fulfilling being a big part of something important, and I felt like I had a really important job and I wanted to get it done as fast as possible so I could do other things that were important,” said freshman Bryn Campbell. “It’s cool to see the parts that you did in the bigger picture, like your cog in the machine is working in the whole engine.”

“I’ve been working on it since the end of freshman year,” said Irene Prescott, whose position as yearbook managing editor saw her focused primarily on photographing the whale’s progress. “I was here for the whole process and my senior year it’s done, I got to help with it, it feels good. Complete.”

“It’s been such a long-term project, it was really motivating that our goal was to finish it. To see the light at the end of the tunnel, reachable, in sight,” said Sophie Hansen, who previously worked on the whale through science club. Her brother Josiah, one of the original students involved with the whale through Lisa White’s science elective, returned to put the finishing touches on the skeleton.

North Haven Community School alumni Kelsey Jones, now the school’s guidance counselor, and Ben Lovell, who is serving an interim position on the school board, each worked on the school’s first marine mammal skeleton, a white-beaked dolphin, in 2004 and 2005.

“I think it’s really fun to see what’s possible. One thing I’ve always loved about the big projects at North Haven is that you can see the way you impacted the school because there are things there that weren’t there before. A boat, a car, a skeleton, a new building, a mural on the wall,” said Jones.

“It’s absolutely beautiful,” Lovell said. “It’s testament to that part of North Haven Community School that accepts challenges, it’s the students accepting the challenges and driving and working collaboratively with teachers in a way to get to a successful endpoint.”

In providing the opportunity for students to develop skills, build knowledge, and collaborate with each other, community members, and experts, the whale has fulfilled Chris Koerber’s original hopes for the project.

“It’s really satisfying because the investment of all the many people who put time and energy into it and cared about the project paid off in terms of creating an experience for our young people,” Koerber said.

The tangible product of that experience now stands sentinel along the school’s driveway, a testament to what a school, community, and experts can accomplish with time, resources, and a collaborative spirit. 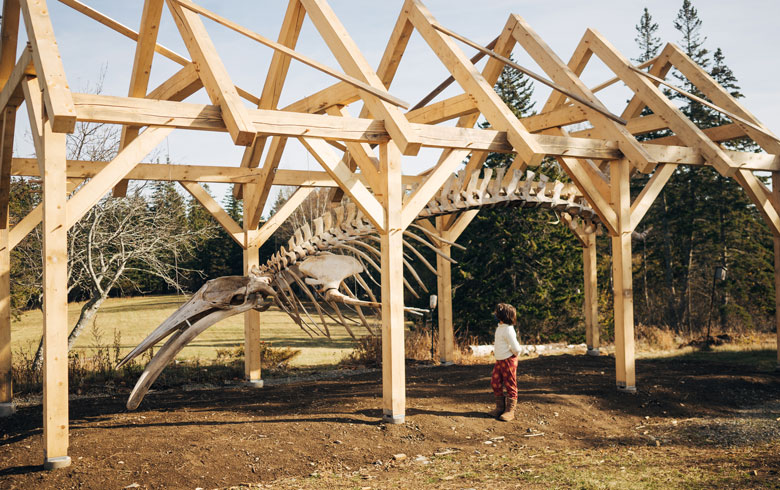 The minke whale skeleton is now rearticulated and housed in a timber frame structure. PHOTO: WI