Maine has the power to draw people with its rugged beauty. But Maine is more than a pretty face, and it casts its spell over entrepreneurs who find possibility in its vast coastline. On the shores of the New Meadows River in Phippsburg is one example.

The Basin Oyster Project began to take shape three years ago in a conversation between longtime friends. The plan was to create a sustainable oyster reef using discarded oyster shells for ecosystem restoration and to offer educational programming.

The project began as a three-year, grant-funded project with The Nature Conservancy and has since evolved into a collaboration with the Maine Oyster Company, the town of Phippsburg, and the Yarmouth Shellfish Nursery, a cooperative learning study in the Yarmouth schools.

In 2017, Amanda Moeser, former Basin Project Coordinator at The Nature Conservancy, laid the scientific groundwork for the research site in the Basin, a saltwater inlet in Phippsburg. When the grant for the project ended, members of the Phippsburg Shellfish Committee adopted the project, including the aquaculture lease for the Basin site.

From there, John Herrigel, owner of the Maine Oyster Company and a Phippsburg oyster farmer, and his longtime friend, Morgan Cuthbert, the science teacher behind the Yarmouth Shellfish Nursery, joined the effort and expanded the project into the business and educational sectors.

“It’s organically growing,” said Herrigel. “It’s the best form of sharing with people because there are so many different overlaps.”

It was Herrigel who first discussed the idea of students building shell castles for the oyster reefs with Cuthbert, a science teacher who created the shellfish nursery initiative for his students.

“That’s what really fires me up,” he continued, “all the different components working together. They’re never at odds—education, institution, for-profit.”

In recent months, The Basin Oyster Project has taken on tangible form, as bait barrels filled with loose oyster shells are piled high at the former general store at West Point in Phippsburg. The store is now owned by Herrigel as part of his Maine Oyster Company.

After much trial and error, the oyster larvae on the surface of the loose shells are on their way to becoming baby oysters and the reef in the Basin, which is surrounded by 1,900 acres of protected land and four miles of coastline.

“Just to be involved with this thing that’s actually alive is so amazing,” said Dot Kelly, who took over the lease from The Nature Conservancy on behalf of the town of Phippsburg. “So many issues have two sides with winners and losers, but this project has only winners.”

“It puts Phippsburg right on the cutting edge of this real research that’s going on,” he said. “Aquaculture is a known entity that is open to collaboration. You can go in so many directions when you’re sharing resources, not just oysters in the Basin,” said Herrigel. “There’s a real growth curve now, from Damariscotta to West Bath to Winterport and beyond.”

The project has the potential to become a model for Maine, much like oyster restoration efforts in the Chesapeake Bay and the Billion Oyster Project in New York City.

Despite the project’s wide-reaching goals in a variety of sectors, the educational undercurrents bubble to the surface, time and time again.

“We’d love to see this curriculum go up and down the coast,” said Kelly. “There are a lot of different ways to interact with the water and find out how to do scientific methods.” She hopes to build marine science classroom kits for students to use in their local coastal waters. 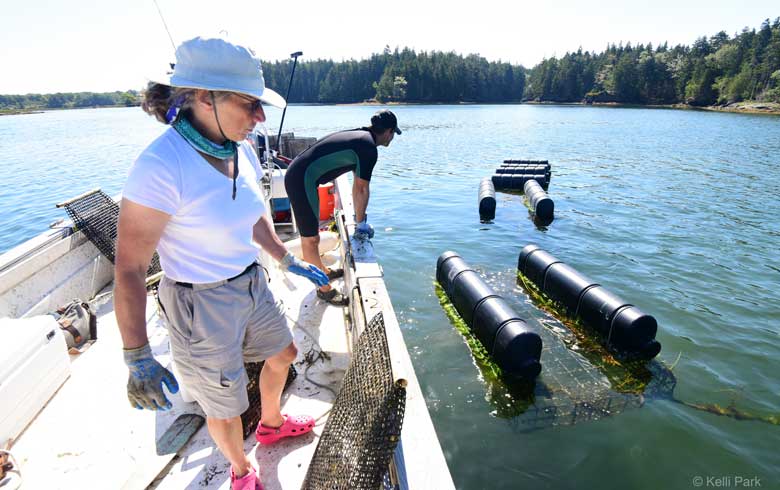