As the Maine Climate Council works out recommendations to reduce greenhouse gas emissions (scheduled to go to the governor’s office and the legislature on Dec. 1), and with President-elect Joe Biden’s commitment to reenter the Paris climate accord, Maine conservationists are considering what the election results mean for climate and the environment.

For one thing, the council’s proposed strategies for mitigating climate change could mean a lot of jobs.

“The largest sector for job growth is clean energy jobs.”

Ahearn was part of a Nov. 13 virtual panel discussion hosted by the Maine Conservation Voters. She said Maine’s abundance of natural resources in the field of renewable energy—solar, wind, hydro, and biomass—well position the state for a transition to a clean energy economy.

“There’s so much potential here,” Ahearn said. “The more we can message positively what this climate action plan can do, the more success we’ll have.”

Tiernan Sittenfeld, senior vice president of government affairs at the League of Conservation Voters, said the Biden plan is “the most ambitious” in U.S. history.

Sittenfeld said that as the nation grapples with three other crises—the pandemic, the economy, and racial injustice—climate change nevertheless continues to be a focus of public concern.

“The focus on climate change has continued as people face impacts in their everyday lives,” she said. “I think people get that all of the crises are interrelated.”

Despite the Biden plan, the ability to move forward on addressing climate change will depend in part on which party controls the U.S. Senate, she said.

“Regardless of what happens this year and next year, there will be a big focus on the Senate for the 2022 elections,” she said.

The U.S. House of Representatives “lost some rising stars” when it comes to the environment, she said, citing legislators such as Rep. Joe Cunningham of South Carolina, who lost his seat during the recent election. He led efforts to pass the Great American Outdoors Act, a landmark conservation bill.

With the Democrats still the majority party in the House, and Speaker Nancy Pelosi “still the strongest environmental speaker we’ve ever had,” House members “are ready to go to the mat” on climate change, Sittenfield said.

Conservationists, she said, had expected the “best-case scenario” from the election, with Democrats at the helm in the White House and Congress and federal progress to be driven by both executive action and ambitious legislation.

The election results will make legislation tough, she continued.

“But the Biden administration has a tremendous amount of executive authority and they’ve made a big commitment,” she said.

Meeting the climate crisis, building a clean energy economy, and addressing environmental injustice are among the commitments made in Biden’s jobs and economic recovery plan for working families, called Build Back Better. The plan includes a commitment to invest $2 trillion and create jobs to build sustainable, equitable, clean-energy infrastructure, including transportation, buildings, housing, the power sector, agriculture and conservation, and environmental justice.

Some of those goals, including the financial commitment, will be harder to achieve without a Democratic majority in the Senate, she said. Nevertheless, she said, there will be opportunities for some legislative action and for executive action.

In the meantime, said Ahearn, Maine’s climate action plan is poised to jumpstart the economy while reducing greenhouse gases.

Sittenfeld said her organization is encouraged by “the explosion of people” participating in the democratic process despite the difficulties of functioning during the pandemic.

“People across Maine and the country continuing to weigh in with their elected officials, in whatever way is safe, is important,” she said.

Both speakers acknowledged the pandemic has complicated progress toward reducing carbon emissions.

“The governor has indicated she will use bonding to actualize the climate action plan as much as she can,” said Ahearn. “However, you need two-thirds of the Legislature to pass a bond.” That ratio seems unlikely this election round, she said.

“The chance to think about what’s possible—to help our economy recover in a way that’s more just and equitable and create good-paying jobs and focus on environmental economy—is a sea change and exciting to contemplate,” said Sittenfeld. 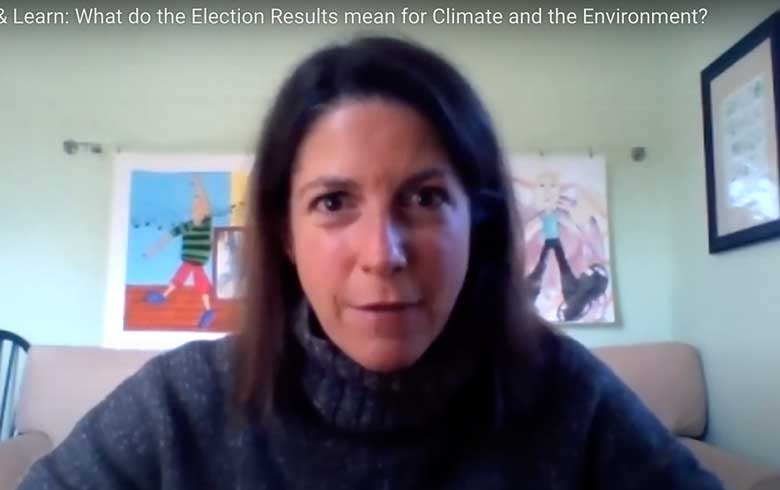