Historian Howard Zinn (1922-2010) is the author of The People’s History of the United States, a contrarian view of American history that should be read by everyone regardless of political persuasion. Zinn provides a provocative alternative perspective on our nation’s story as institutionalized in the text books, a telling argument for taking a second look from a different point of view at something so complex and dynamic as human history.

I have always felt that Americans have no real understanding of our history as a maritime nation. The subject is mostly absent from the texts and the specific maritime histories have been, most often, enumerations of customs house documents, ship voyages, and the odd naval battle. Only recently has that begun to change as historians from other disciplines have discovered the broad impact and richness of maritime endeavor as a core theme in the American narrative.

The principal value … was not just the trade goods and financial accountings, but also the ideas and beliefs, the art, the music…

If you look at the topography of our nation, you see a system of watersheds—great lakes connected to rivers and the sea; streams descending from major mountain systems, east and west; and myriad rivers feeding the Mississippi, a central, north-south artery that splits the nation.

Those waterways were the homes of indigenous people that became paths of early exploration and settlement. Many of our largest inland cities are located on the confluence of navigable rivers.

The Erie Canal, an engineering marvel, linked the heartland to the east coast ports and Europe. Lewis and Clark followed the rivers and streams into the west, through the Rockies to the Pacific. Along these waterways passed the grain, cotton, tobacco, and other agricultural products, the iron and steel and coal and timber, and the manufactured goods, distributed internally, to the eastern ports like New York, Boston, Charleston, and Savannah and around Cape Horn to western ports of San Francisco and Seattle and beyond, as the essence of an emerging American world trade.

The external perspective is also instructive. It reveals that trade is more than export; rather, the exchange of goods from Europe and further east, and, most importantly, the imported return, the arrival of immigrants, refugees from religious tyranny, entrepreneurs, and outlaws, who are our forebears by the thousands.

We strive to honor our remaining indigenous people, but the rest of us, colonials, came from away, from Ireland, Scotland and England, from Scandinavia, from Germany and Italy, from Africa (albeit an involuntary passage), and eventually from all the nations of the world, these diverse ethnicities combining to create the complex nation that we are. Most of these people came by ship across oceans, and, today, certainly by different vessels, they are still coming.

What Zinn and other historians have recognized is that the principal value exchanged by this process was not just the trade goods and financial accountings, but also the ideas and beliefs, the art, the music, and the literature that are the cultural fabric of our moment.

We listen to world music and appreciate world art. We are open to multiple religions and spiritual practice. We fuse food traditions, fashion, fads, medical treatments, exercise, sport, and language. We may have new and different portals now, but the process began long ago when the first sailors left shore in search of something beyond their own experience, beyond their limited horizon.

When I look at things now, I wonder where the sailors are. We have become fearful and oppositional and close-minded. We have become complacent within our horizon and hostile to new people and new ideas. We need historians like Howard Zinn, or new leaders to show us the way back to the sea, the sea that connects all things.

Peter Neill is the director of the World Ocean Observatory, which produces weekly radio essays that can be heard on WERU-FM, 89.9, on podcast at apple.com/us/podcast/world-ocean-radio/id425361249, and at http://www.worldoceanobservatory.org/world-ocean-radio. He lives in Sedgwick. 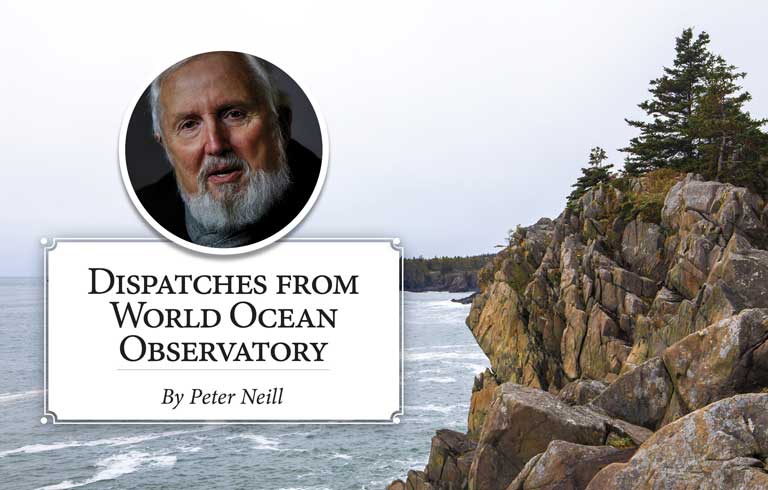