If we could see the Maine coast through Jill Hoy’s eyes, it might be like looking through a broken kaleidoscope. You’d still be able to make out the shapes of rock, tree, sea, headland, and boat, but their angular components would become saturated and vibrate with color.

In a lively conversation with Hoy in her Stonington gallery, dozens of her oil paintings hung or lying nearby, she intimates as much, noting that people probably see colors differently from each other. To further illustrate the point, she looks out the open door and lists the shades of blue, gray, and green she sees in the paved walkway, the pinks and purples that dance off the clapboards of an ostensibly white house. 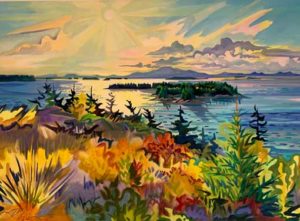 “That’s a white house,” might be a first thought, she says, “yet there’s all kinds of colors on that house. There’s a spectrum of light bouncing off the clouds, and it reflects off the white surface.”

Hoy’s paintings are not didactic in this way, trying to force the viewer to see what she sees, nor are they an attempt to fuse Gauguin-like imagery on a Maine landscape traditionally rendered in muted tones.

“These painting are a bit ‘wake up to your world,’” she admits, but this is how she sees that world.

Her color-charged paintings do challenge the ingrained notion that Maine’s beauty is subdued. Still, she remembers, with a smile, her late husband and fellow artist Jon Imber saying to her, “Jill, you’ve got to learn about gray.”

She has learned. Grays give the eye a resting place, Hoy explains.

“I also use a lot more blues now,” including shades she’s never before mixed on her palette.

“These painting are a bit ‘wake up to your world.’”

Her relationship with Imber, who was afflicted with and died from ALS, was captured in 2014 documentary Imber’s Left Hand, so titled because the disease left the painter with control only of his non-dominant hand. There is a scene in the film in which Hoy and Imber confer on his work, and it’s fascinating to see the two confident artists discuss a painting in candid terms.

“Jon and I respected each other’s work,” she says, though she acknowledges that “he was much more porous than me,” readily absorbing new approaches.

Because she was anticipating a visit from The Working Waterfront, Hoy had arranged a corner of the gallery with paintings of boats, fish shacks, trucks, and yards full of fishing gear.

“These paintings are full of energy,” she says. “They’re alive, with a lot of information, but with increasing lyricism. I’m starting to become the painter I always wanted to be.”

That may sound self-promotional, but as one who has followed her work over the decades, it rings true.

As we look at each piece, Hoy fills in the back story. A view of the fishing boat Elva G., which belonged to John Ames, is pictured in a yard. Ames was dying, and in response to her query about painting the scene, he told her, “Better come soon. It’s closing in.”

“I’m already painting,” was his wry reply, referring, of course, to his buoys. 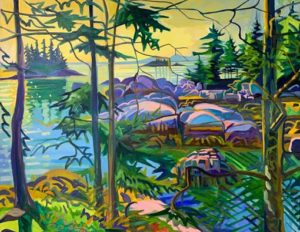 Using this one as example of what she aims for, Hoy gestures to the line of traps, which seem to have been quickly rendered.

“It’s the rhythm of them,” that she wanted to capture. “It has the velocity of the place, of the moment.”

Painting en plein air hastens these moments, she says, though it often means “standing outside for hours.”

Hoy has wrestled with the notion of when a painting is finished. A few she shows me have achieved this status, she says, and she admits they are pleasing in their richness and texture, but don’t quite hum with the energy of the others.

Hoy has been visiting Stonington in the summer since 1965. Her father was a college administrator, and a colleague invited the family for a visit, and he was smitten. Because his work meant the family lived in different places, the town represented a kind of home.

“It was a somewhat itinerant life,” she says. “This was my anchor. It became, pretty much, the love of my life.”

Hoy’s home and gallery are in the heart of this fishing, and, increasingly, tourist village, which unfolds down a steep hill, offering views over islands and down Penobscot Bay that would inspire any artist.

“It’s a south-facing harbor. The light is beautiful. The architecture is great. It’s got the best granite.”

But the town is more than aesthetic fodder for Hoy.

“This is a working island. I had to realize that’s what this is,” she says. Her long presence here and her affection for its people have opened doors to subjects for which others may not have access. She believes she has earned the respect of the fishing community.

“I think they know I work really hard. It has educated me to its tempo,” she says.

These days, she winters in New York City or Somerville, Mass. The off-season environments change her work. People and faces, in darker contexts, dominate in a small selection she pulls from storage to show me.

But it is the rugged beauty of Stonington, and her singular take on its charms, that seem to be her depthless inspiration.

“I go from Indian Point Road,” to the east of the village, “to Sand Beach Road. That’s an infinite amount of information.” 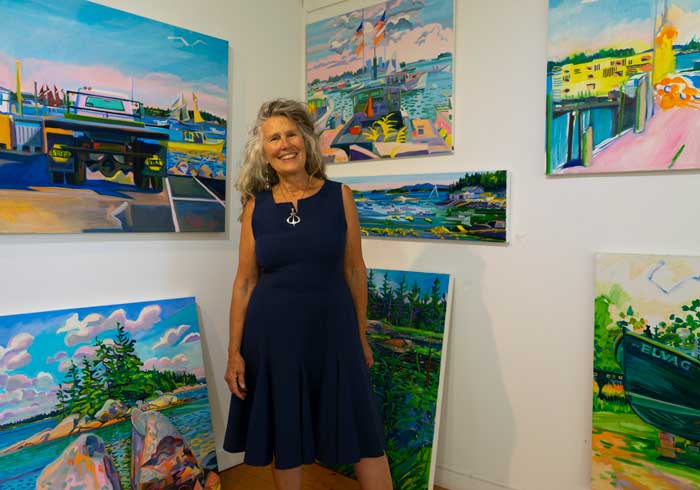 Jill Hoy in her Stonington gallery, in a corner where she has arranged working-waterfront paintings.