A bright October sun had me squinting at the landscape—almost a mirage with its fields of flourishing vegetation. Like summer, I was thinking.

But to farmers John Wright and Sara Hodges, joining me in a long row of arugula, it was perfect weather for harvesting greens at Sparkplug Farm, situated along the shore at the far end of Calderwood Neck on Vinalhaven. This is their fifth year leasing land and growing there; over that time, they have become an island institution. People line up early every Saturday at the flea market in town, awaiting their chance to buy produce at the Sparkplug stall or pick up their CSA (community-supported agriculture) selection.

Probably most famous among their many vegetables are mixed salad greens, tomatoes and garlic, but they also provide free-range eggs, raw milk and at certain times of the year, grass-fed beef. The restaurants on Vinalhaven and North Haven serve their products, and both islands’ groceries stock them.

John and Sara like to say “What we grow here stays here.” Being part of the local economy and community is important to them. Seventy-five of the 100 current CSA members are year-round residents.

But into this halcyon picture a recent Facebook post created a shock tremor: news from John and Sara that come April, they would be leaving Vinalhaven, and the search was beginning for who would take over.

A collective island gasp expressed concern. John and Sara will move to Leeds, on the mainland near Augusta.

“We want to build a house on 100 acres we’ve bought, and do more with livestock,” John said, a bit apologetically. But they are proud to leave Sparkplug in a good place logistically for whomever comes next.

They had begun with three acres and 20 CSA members. Now, the property lease includes five acres of open vegetable fields, 15-20 acres of pasture, three hoop houses, a certified milking shed, a walk-in cooler and a washing station for cleaning vegetables.

They don’t complain about the crush of responsibility, long hours and physically demanding work. Call it, perhaps, a benefit of their age—still in their 20s, enthusiastic and energetic.

They both have upbeat attitudes, and focus on the positive.

“Vinalhaven has been good to us,” John said as he noted that in the spring as the CSA reaches out for member purchases of annual shares, the lobstering families, whose income hasn’t picked up yet at that point in the year, are able to commit with money they earmarked for the farm.

As John and Sara began to grow the business, they spoke with other farmers on the island.

“Who was doing what and who wanted to maintain it as their specialty was important for us to know,” Sara said. “Communication and coordination matter.”

Being on an island means that, as it does for many other people and services, farmers look out for each other. Help takes on a variety of forms. There are trips from Spark Plug across the Thoroughfare to Turner Farm on North Haven to share things like the service of the “AI [artificial insemination] guy.” When Erin Creelman, a Vinalhaven cheese maker, needs raw milk in addition to her what her own goats supply, she turns to Spark Plug.

CSA members can contribute toward shares that allow families to participate who otherwise couldn’t afford to. John and Sara feel that good food shouldn’t be a luxury item, but many factors conspire to make prices what they are. For example, they can’t order in large bulk amounts and have it delivered to the island; smaller amounts, John estimates, “push costs up 10 percent more.”

And there are, inevitably, crop failures. Not using herbicides, combined with this year’s dry weather, meant tolerating competition from weeds in the fields. And two people, with some help from a few co-workers and some volunteers, can only do so much.

Another frustration, Sara says, is “the loss of poultry to wildlife.”

The way the couple meet the many challenges farming pose, she adds, is to remain focused. “You just have to have your vision and keep it,” she says.

Who will the next farmer or farming family be? What is the most useful experience to bring? John and Sara think that, besides technical skills, “understanding life on an island is a plus.”

What do they love about Vinalhaven? They both said it is rewarding “to be part of a community where people understand and appreciate hard work,” long days spent outside in all kinds of weather doing physically demanding jobs. Fishing and farming have a lot in common.

And they love sharing their passion for growing food with others on the island; Sara writes a newsletter for CSA members, including helpful hints for backyard gardens, seasonal recipes, and notices of discounted sales. They also offer tours of the farm several times a year in conjunction with the Vinalhaven Land Trust.

As they wrote on Facebook, “We are sad to go; however, this opens up an incredible opportunity for someone to run a small farm on the island. Thanks for five wonderful years; we hope to see this continue to be a farm! If you or anyone you know would be interested in this opportunity, please be in touch” at sparkplugfarm@gmail.com. 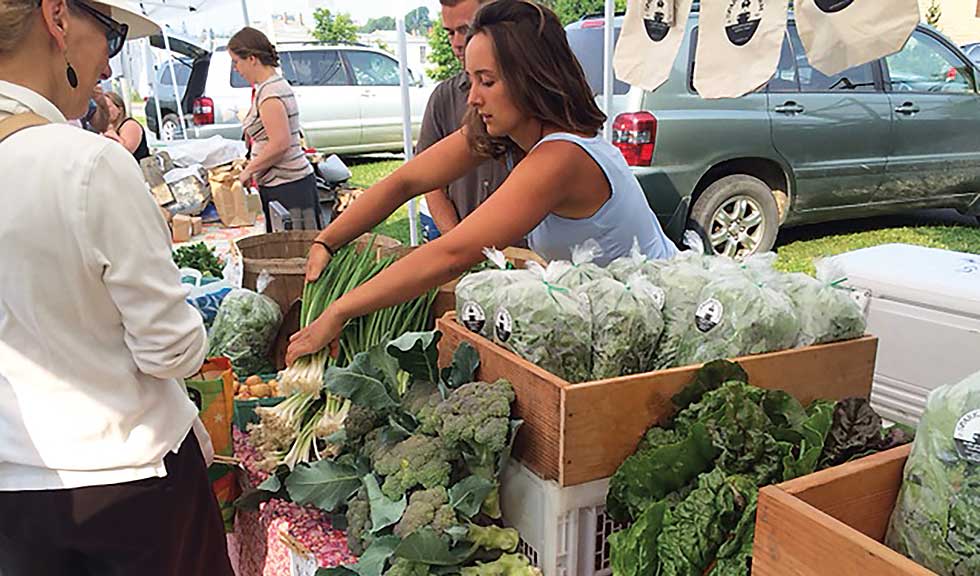