Winter is the time when North Haven’s diaspora spreads far and wide. Sure, the core 350 of us stay put, keeping the lights on at Waterman’s, the school, the store, and the church; plowing the roads and fixing burst pipes; and carrying on living in our home town. But there are about a thousand others, with connections to North Haven ranging tangential to ancestral, somewhere out there.

Not to worry. North Haven, it seems, exudes a strange magnetism on anyone who has touched its soil, or even who knows someone similarly touched. And people with a North Haven connection can find each other, no matter how far afield.

My first, perhaps best example of the North Haven Effect is part of my own origin story as an islander-ish. In the spring of my senior year of high school, I visited North Haven to see the production of Red Eye of Love, which some friends/a love interest were acting in. Years later, I happened to be in Madrid (not the one in western Maine, the one in Spain) at the same time as the (now former) love interest, and a few years after that I received the phone call that started it all, inviting me to apply for a job on the island I had been to once.

The North Haven Effect reasserted itself when I’d only been on the island for a year or so. On vacation in and around Las Vegas, Bill and I were standing on the Hoover Dam when a couple walked past us. They looked familiar.

“Was that…? Could it be…?” we asked each other. Nah. It was statistically unlikely that four North Haveners would be on the Hoover Dam at the same time without preplanning.

But of course that was exactly what was going on, as we confirmed when they were in line behind us at the MGM Grand Buffet the next morning. Not just the same hydroelectric landmark, but also the same hotel hosted slightly over 1 percent of the island’s population that winter.

Or how about the time we went to Manhattan to visit my baby nephew this October? We didn’t tell any of our several New Yorker friends we’d be in town, as we wanted to prioritize family time. On our walk from our sweet cat-sitting gig (also a North Haven connection) to my sister’s apartment on the East Side, we passed a dog park. Naturally we stopped to ogle the pups.

“Hey —isn’t that…? Could it be…?” And sure enough, it was—a friend from the summer community, instantly recognizable from his trademark hat and brindled dog. We started hollering his name from the sidewalk, and got to have an unplanned mini-reunion.

The North Haven Effect seems to be contagious. The friend with the hat’s sister works with my sister at a huge hospital; twice now they’ve collaborated to deliver some babies at odd hours.

My favorite most recent incident happened between a North Haven friend (who is also a Central Maine friend, because Maine is very, VERY small and interconnected) and one of my husband’s high school friends, all the way in San Diego.

Our Maine friend took a warm-weather gig nannying twins, and our San Diego friend gave birth to her own twins, and through some sort of San Diego Twins Facebook group wound up at the same brunch. I think the conversation went something like this:

“An island off the coast of Maine.”

“Which one…? Could it be…?” and of course it was, the one island to which they were both connected through whatever magnetic force emanates from our chunky, basalt-laced topsoil.

I wonder if other islands have similar pulls on their visitors and populace. Once you’ve set foot on Little Cranberry, are you forever drawn to others who have done so? Can Vinalhaveners find each other in a bustling city square? Or is the North Haven Effect unique? Either way, the thrill of beating the odds and bumping into a North Havener in an exotic locale never fades.

Courtney Naliboff lives on North Haven with her husband and their daughter, where she teaches music and theater. 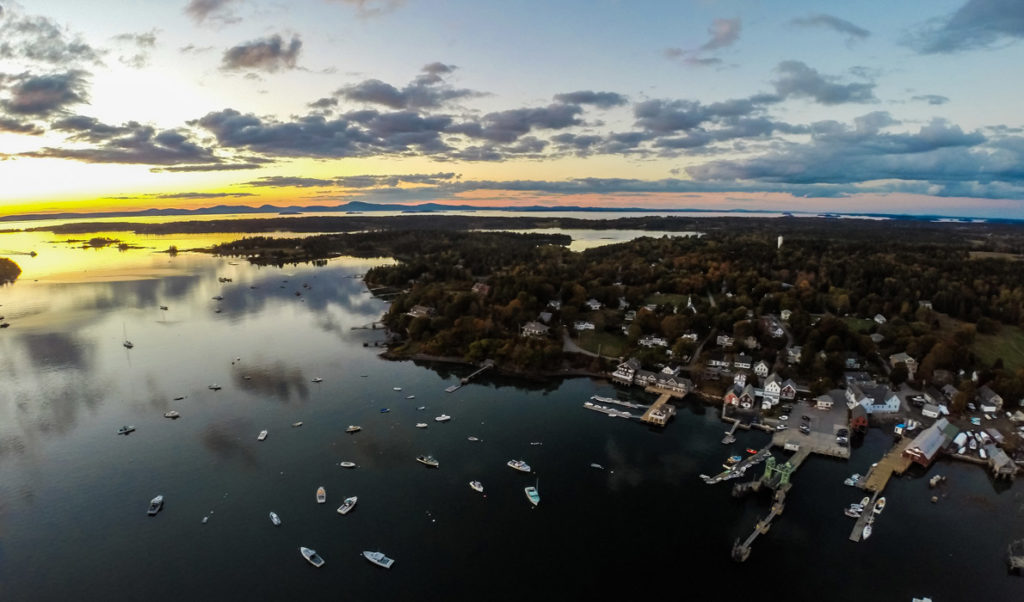 An aerial view over North Haven