I never met Stephen H. Robbins Jr., a legendary offshore lobsterman of Stonington who passed away in July of this year. However, I do know Randy Olson, a marine-biologist-turned-filmmaker, who made one of his first movies about Stevie and his family, nearly 30 years ago.

I watched this film again recently, titled Salt of the Earth: A Journey to the Heart of Maine Lobster Fishermen, and was struck by just how plain real both the humor and emotion were. This simply made film, with hand-held footage taken in one evening at the Robbins’ waterfront fish house, catches and expresses the bright and unique spark of two generations of fishermen of the Robbins family.

Stevie, as Steve Jr. was known, was one of the first offshore lobstermen in Maine. He had a 55-foot steel lobster boat, named the Stacie Vea after his daughter, built at the Gamage yard in East Boothbay in the early 1980s. He and his brother Brian worked far out in the Gulf of Maine, at times to the Hague Line, the boundary between the U.S. and Canadian fishing grounds.

He was a big man, 6-foot, 5-inches tall and 300 pounds, and a real fishing innovator who played a big part in developing the Maine lobster fishery into what we know today—the most valuable marine fishery in the country for the past five years, according to National Marine Fisheries Service.

This is big and worthy work, and worthy of note, but from the film it is apparent that he was much more than just an innovative fisherman. He was a storyteller and musician in the finest Maine narrative tradition, with no acting or artifice, just real stories that he felt so strongly that he himself could cry.

One such story in the film is how he remembers being described as a boy by a passing yachtsman as “the salt of the earth,” and this stuck with him for life. His pride in this description, and the way it guided his personal principles, were seemingly themselves made of Stonington granite.

Olson, the filmmaker, has in his work taken two seemingly disparate tracks, the combination of which has outfitted him uniquely for creating movies about fishermen and the ocean. He was first a newly tenured professor at the University of New Hampshire, with a Ph. D in marine biology from Harvard, when he decided to leave the security of that position to move to Hollywood and begin film school at the University of Southern California.

He has made films building on his background in marine science, while weaving in a very personal and humanistic approach. It is not hard to think that his subtle humor, narrative style, and inherent human empathy and connection were influenced early in his career by the interview that forms the core of Salt of the Earth, with these elements all so clearly displayed by Stevie Robbins and his family in his workshop on that evening.

Olson’s later works include an award-winning documentary about intelligent design theories and the Kansas School Board in 2005, a surprisingly laugh-out-loud piece about global warming called Sizzle: A Global Warming Comedy, and most recently a surf film documenting the massive storm swells experienced in the south Pacific in 2012.

Olson is an innovative communicator of complex scientific issues, a storyteller himself who learned this craft from his early subjects like Stevie and his family, who remained lifelong contacts and friends, and Salt of the Earth remains his favorite of all his films.

The messages in this movie are just as fresh now as they were when they were recorded in 1990, tales of honest work on the water, dripping with the character, endurance, pride, and humor of Maine fishermen.

Stevie Robbins was clearly a man who moved in big spaces, not only the windswept offshore realm where he worked, but also in the scope of his emotions and connections. I never knew him, but as I live in our shared waterfront culture, I look for the signs of those who have carved out this space, and I know from this movie that Stevie Robbins was one of those who made the Maine coast what it is.

Salt of the Earth: Journey to the Heart of Maine Lobster Fishermen can be accessed and downloaded for free at www.saltthemovie.org. 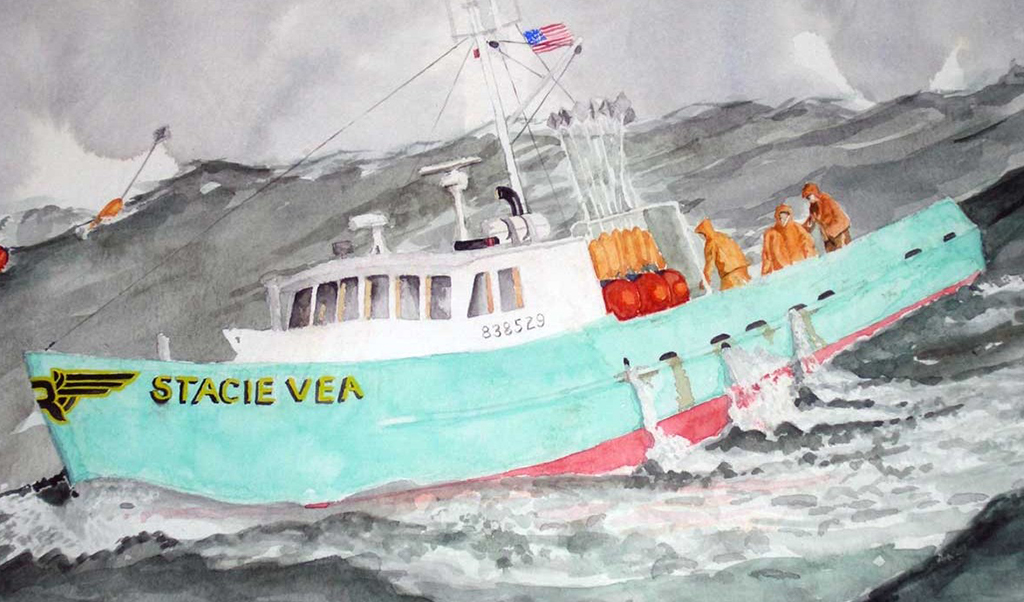 Stevie Robbins Jr.’s boat, the Stacie Vea, as rendered in watercolor by Tom Santaguida, who notes it was “inspired by seeing her out on the international line in a breeze on our way back from the Grand Banks of Newfoundland.”