Let’s turn the calendar back to another October, the one in 1973, when OPEC raised the price of oil by 70 percent. Imagine that in early 1974, your state or federal government made a $1,000 tax credit available to be applied to the purchase of any vehicle that got 25 miles per gallon or more.

And perhaps most important, manufacturers would discover economies of scale—designing a new, more aerodynamic windshield that could be used on several vehicles—and innovation—maybe developing a new kind of alloy for a lighter engine block.

Some innovation did follow the two oil crises of the 1970s, but it was market driven, not spurred by government investment. And the big winners were auto manufacturers then based in Japan: Toyota, Datsun (now Nissan) and Honda. Had the U.S. been bolder in offering tax credits, maybe even tying them to American-made vehicles, GM, Ford and Chrysler might be in better shape today.

And the changes in consumer habits didn’t last. When prices at the pump dipped, many Americans returned to big, fuel-inefficient cars and trucks. Tax breaks for buying higher-efficiency vehicles could have made them more attractive through the cheap gas years.

We face a watershed moment as important as 1973, even though oil prices are at historic lows. The opportunity this time lies with electricity production.

Innovation is being seen in the hardware that harvests electricity from the wind and tide, but a third realm lies with the sun.

Solar panels using photovoltaic technology to produce electricity are a game-changer. They require little to no maintenance, last for decades, don’t require their users to unplug from the utility and have a short return-on-investment. Coupled with air-source heat pumps, they may cut a homeowner’s or business owner’s energy bills in half.

Prices for the hardware have dropped 70 percent in the last six years, the result of steady purchases. But installers and manufacturers struggle to plan beyond the next election cycle, because state legislatures and Congress waffle on the tax breaks that entice consumers to buy.

Another factor that could stall the solar revolution is the role electric utilities play. Currently, utilities in Maine are required to credit customers whose solar arrays produce more than they draw from the utility. Elected officials must understand the importance of that arrangement staying in place. Given Gov. Paul LePage’s suspicion of green energy, that law could be undermined.

One small way state law is hampering the impact solar power could have in Maine is the restriction on the number of shareholders allowed in a community owned solar installation (see our story on the state’s first community solar “farm” in this issue). The number of shareholders is capped at nine; why not 25, or 50? Proponents point out that fixed, one-time costs like the installation of cables and inverters could be spread out over more users, thereby lowering costs and accelerating the payback.

Whether it’s regulations or tax credits, government must act to help prime the pump for photovoltaics. The benefits extend well beyond lowering costs for some homeowners and business owners; carbon emissions are cut, domestic manufacturing could be boosted and, perhaps most compelling, every energy dollar that stays close to home spurs further economic activity. 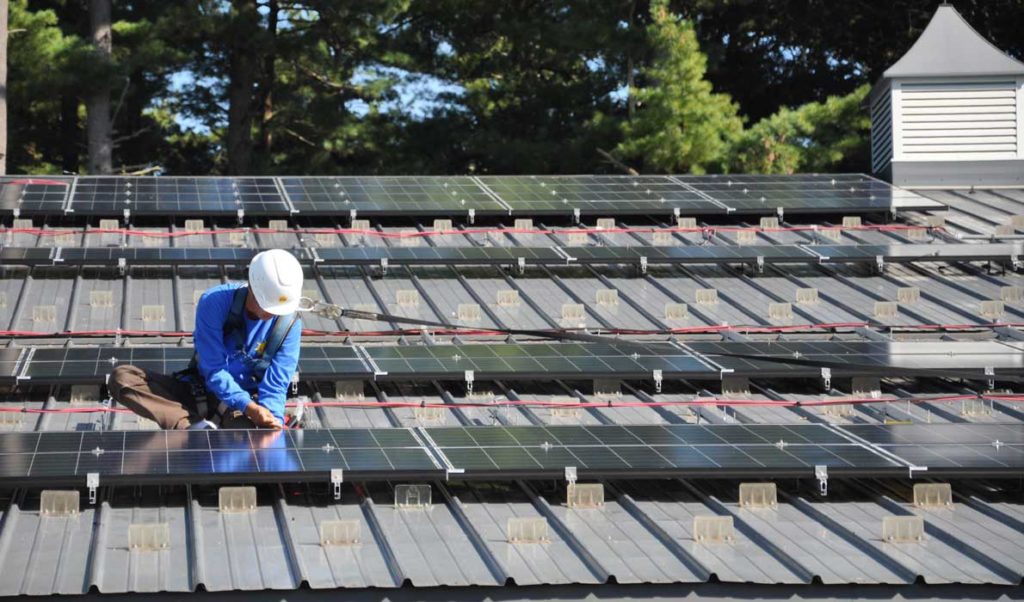