New York City has its Billion Oyster Project, and now New Hampshire’s Great Bay has its own 25-acre project, with help from fishermen in Phippsburg.

Like many estuaries along the U.S. Atlantic coast, Great Bay was once a maze of channels flowing through a complicated oyster reef system that covered more than 85 percent of the bay. Over the centuries of harvest and other human activities, oyster populations decreased dramatically, until only about 10 percent of the bay supported reefs. Now that trend is reversing, as neighbors around the bay are working with The Nature Conservancy of New Hampshire, the University of New Hampshire, and others to rebuild oyster reefs.

Since 2009 the project has restored 20 acres of reefs. The oysters pump a massive amount of water through their systems, improving water quality as they remove excess nutrients and particles, resulting in clearer water. This means oyster reefs help deal with sedimentation, which is currently a major issue for Great Bay, which is fed by seven rivers.

Clearer water also helps seagrasses thrive because more sunlight can reach the seafloor. Seagrass beds, and the oyster reefs themselves, provide excellent habitat for juvenile fish and other species. An estimated 70 percent of commercial marine fish species in the northeast U.S. live in estuaries for part of their lifecycle; better estuary habitat should benefit our commercial fisheries in the long-term.

This past summer the project was in high gear. Over the course of three long days, 500 cubic yards of clam shells were deployed from a barge to the bottom of the bay, creating a new reef with a five-acre footprint.

Baby oysters are grown by volunteers with waterfront access to the bay, who monitor oyster spat, or baby oysters, for about 12 weeks over the summer. Once the oysters get to be approximately an inch to an inch and a half in length, they are towed out and hand-seeded onto the reef, and supplemented with additional baby oysters grown by the team in a growing facility.

While the project’s goals are focused on the environmental and ecosystem benefits of oyster restoration, Alix Laferriere, The Nature Conservancy’s coastal and marine director for New Hampshire, believes that what may be more important than the ecosystem benefits are the community engagement outcomes.

“The volunteer oyster conservationists who are growing oysters at 91 sites around the bay have become vocal, energetic advocates for oyster restoration,” he said.

The project has been such a success that the Maine chapter of The Nature Conservancy has started a pilot project in the Basin Reserve in Phippsburg. Due to the undeveloped nature of the Basin, this pilot project is not a volunteer program; instead, project partners aim simply to see if they can successfully grow oysters on the seafloor at a place known to previously be habitat for wild oysters.

“They said there used to be a lot more wild oysters in the Basin, and they whipped out the map to show me where you could grow an oyster,” Bell said.

With a limited-purpose aquaculture lease in hand, Bell and partners from the University of New England, Casco Bay Estuary Partnership, and Maine Department of Environmental Protection, and with advice from Maine Sea Grant, settled a half-million oyster larvae onto tiles and in baskets of shells. After two weeks in the lab, they were deployed in the Basin.

“Just putting the tiles and baskets out increased bottom complexity and attracted critters—baby lobsters, fish, crabs,” he said. “And the oysters went from microscopic to fingernail size in just three months.”

Fortunately, we aren’t starting from scratch with these efforts. There is much to be learned from efforts elsewhere. Oyster restoration is occurring around the country and internationally. The Nature Conservancy and other groups in Massachusetts, Long Island Sound, and the Chesapeake Bay as well as Australia and Europe have major oyster restoration projects underway.

Success stories are ripe for the picking, even if the oysters are to remain on the bottom. 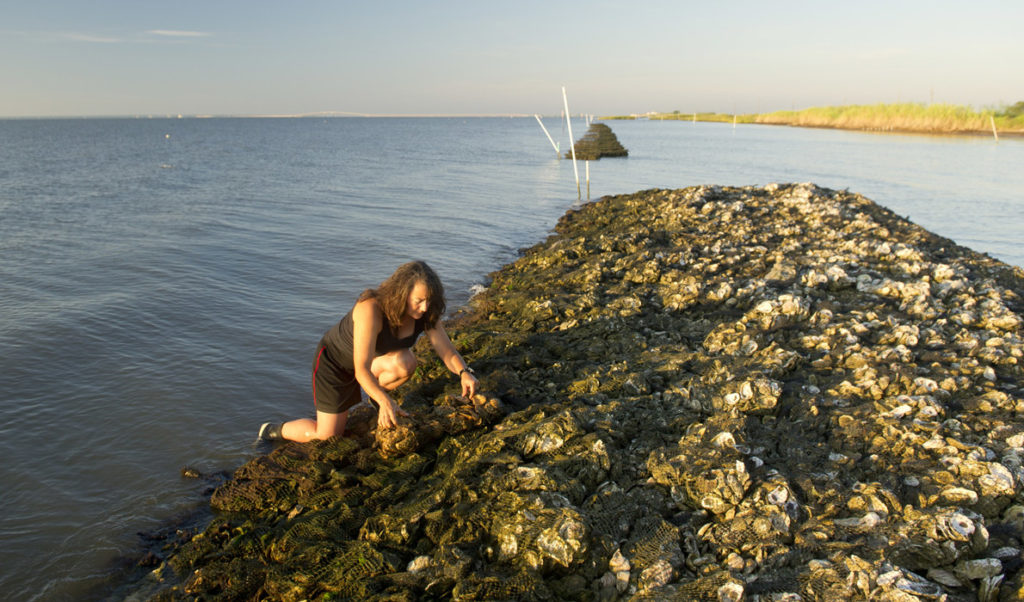