I can’t believe two years have already passed since beginning my fellowship on Frenchboro.

I remember leaving Bass Harbor ferry terminal that first day. I was dropped off by a friend at the terminal with all my stuff packed in an army canvas bag and two other duffle bags. When it came time to board, I strapped two around my body and carried the other one. A crew member spotted me and quickly ran over to tell me I had too much cargo to walk on and I had to find a vehicle to put some of my items in.

A resident who overheard this quickly stepped forward and let me throw my bags in her truck. She told me that she’d drop them off at the parsonage for me; this would be the first of many acts of generosity I would experience over the next two years.

After boarding, I walked to the top deck of the Henry Lee to get the best view I could of the mainland before it disappeared in the distance, just in case it was the last time I would see it.

My stomach folded, twirled, and did all kinds of uncomfortable motions as a sudden rush of anxiety came over me. What was I doing? Have I really committed to living eight and a half miles off the coast on an island that peaks in the summer with maybe 70 residents and drops to fewer than 40 in the winter?

There was no turning back; I had just taken the last boat for the next three days and there was a potluck to welcome me to the community that night.

During the ferry ride I thought about plans to back out, but before I knew it, we were coming into the terminal. The quiet harbor is blocked by Harbor Island, and once you get around it, a small town emerges, hugging the rocky harbor. I walked to the parsonage to find my bags unloaded and on the porch waiting for me.

I was told the potluck wouldn’t begin for another couple of hours, and that I had time to take a hike if I wanted to. I leapt on the opportunity to get my mind off the fact that my only ride off was gone and if tonight didn’t go well, I had two more awkward days before I could leave in disgrace.

As I hiked through the island’s trails, I was in awe of the moss-covered forest, and opted to do some off-trail hiking, or as my mom would call it “boony-stomping.” I wasn’t paying attention to the time, or where I was going, and took out my phone to take a picture only to realize that I only had 30 minutes to get to the potluck.

I looked around for the right way to go, and suddenly heard a bell buoy, one I remembered hearing on the way into the harbor. Knowing that if I headed towards the sound of the bell I would end up back in town, I started onward. But since I didn’t know where I’d end up, I decided to run, which was more of a bounce as I sank into moss with every step. Every few seconds I would stop, check the time, and listen for the sound of the bell. Eventually I made it to the road and luckily it was right behind the parsonage, 50 feet away from the trail entrance.

I tried to gather myself before walking over, but couldn’t hide the fact that I was now drenched in sweat and it was too late to change. David Lunt was sitting outside when I arrived and I quickly apologized for being late. He looked at me puzzled and said, “You’re not late, most people haven’t shown up yet.” I breathed a sigh of relief and realized the queasy feeling in my stomach was gone.

I didn’t experience those feelings again, until I realized my fellowship was ending and it was time to leave Frenchboro. This place has become my home, the community my family. Frenchboro will always be a part of me and I am unbelievably grateful that I have been given the opportunity to be part of this island community.

Padamsee worked with the town of Frenchboro on the comprehensive plan and fire safety. He also collaborated with Maine Coast Heritage Trust to improve visitor access to hiking trails. He is a graduate of the University of Maine, Farmington with a degree in environmental policy and planning. 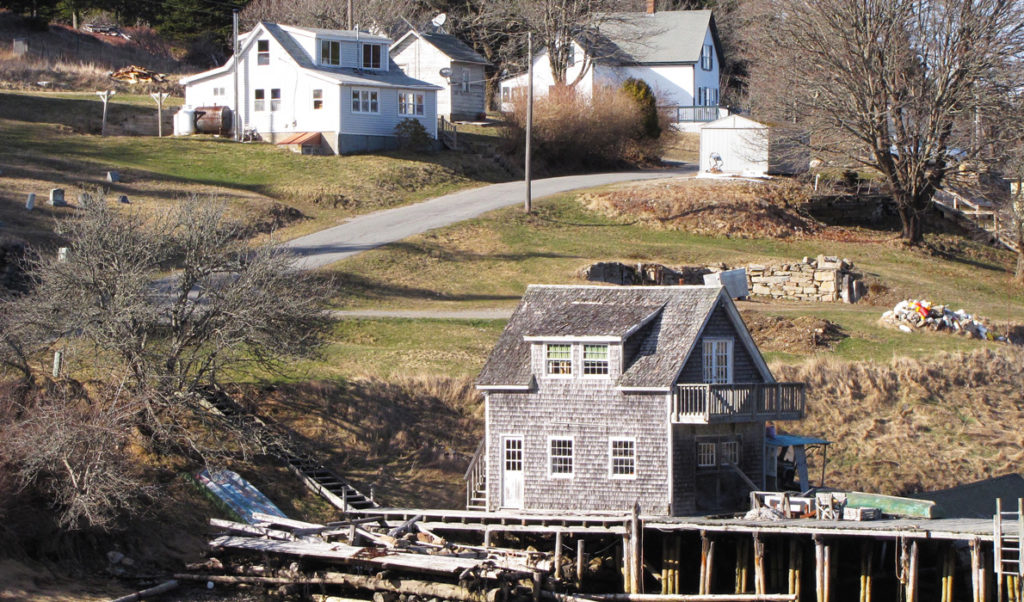