In my new book, Maine’s Beaches Are Public Property, I argue that the state’s highest court, the Law Court, got it wrong in its 1986 and 1989 rulings. The court should have concluded that title to Maine’s intertidal lands is not held by adjacent upland owners, but in reality is held by the state in trust for the public.

It follows, then, that the state may regulate these singularly unique land areas, and may permit the public to engage in a wide range of activities that run the gamut from commercial maritime uses, to shellfish and seaweed harvesting, to modern recreational uses.

But this is not the law in Maine today.

The plaintiff’s counsel in the Edward Bell et al. v. Town of Wells cases (also known as the Moody Beach cases) successfully argued that the 1647 Colonial Ordinance enacted by the Massachusetts Bay Colony ceded title to all intertidal land in what would become the state of Massachusetts to upland owners to encourage “wharfing out” (marine commerce). This ordinance was annulled shortly after it was adopted, but plaintiffs’ counsel pointed out that Massachusetts courts (and later Maine courts) have adhered to this interpretation of the ordinance.

The Bell courts, without examining whether the ordinance was correctly interpreted, or recognizing the status of Maine as a separate state entitled to fashion its own body of laws, felt bound to accept these early Massachusetts and Maine court rulings. In doing so, they saddled Maine with Massachusetts’ intertidal land law. In sum, by simply repeating arguably incorrect judicial decisions, title to all intertidal land in two states has been ceded to littoral upland owners.

In my book, I also point out that no Maine court has ever independently asked, much less answered, the question of whether the ordinance was correctly interpreted. It also points out that most coastal states and numerous U.S. Supreme Court cases meet legitimate “wharfing out” needs by characterizing the upland owner’s right as a “license,” a permission to fill intertidal land that, if exercised, grants title to the filled land to the upland owner. Title to all unfilled intertidal land remains in the hands of the state in trust for the public.

The book cites numerous state and U.S. Supreme Court cases holding that intertidal lands are unique, a category of property that under early Roman law and English common law was thought to be largely “incapable of private ownership.” These cases note that littoral land owner’s title ran from mean high tide landward. After the Revolution (and the founding of the Union), these common-law principles became the dominant view in the new nation.  Early British and Spanish grants to the contrary became a nullity.

More importantly, the book notes (as do innumerable Supreme Court cases) that as new states came into the Union (including Maine), they did so on an “equal footing” with the 13 original states. There was no “second class” statehood. This constitutionally predicated doctrine has consistently been applied to intertidal lands. The Supreme Court in its 1988 Phillips Petroleum holding noted:

“Because we believe that our cases firmly establish that the States, upon entering the Union, were given ownership over all lands beneath waters subject to the tide’s influence, we affirm the Mississippi Supreme Court’s determination that the lands at issue here became property of the State upon its admission to the Union in 1817.”

The book makes clear that the 1989 Bell decision totally ignored this reaffirmation of the “equal footing” doctrine.

Bell errors go well beyond those noted above. The Law Court ignored Maine’s 1820 Statehood Act; the Legislature’s 1975 Submerged Land Act; cases sustaining the 1981 Amendment to the 1975 Act; cases holding that only the legislature can alienate intertidal lands held by the sovereign—such land cannot be alienated by judicial pronouncements. These errors (and more) are fully laid out in the book’s 14 chapters and detailed footnotes.

In sum, Bell’s errors are numerous, inexplicable and indefensible. In my book, I urge they be corrected. A reexamination of these cases is both necessary and justified; such a reexamination leads one ineluctably to conclude that title to Maine’s intertidal lands is held by the state in trust for the public, not by upland owners.

In my view, this is an important book that should be widely read by those who care about access to our shoreline. It is available at the Island Institute’s store, Archipelago (thearchipelago.net) and through Towerpub.com or by calling 1-800-969-8693.

Orlando Delogu joined the University of Maine School of Law faculty in 1966, 40 years as a full-time member of the faculty and 11 years as emeritus professor of law. He also helped found the Maine Civil Liberties Union, and served on the Board of Environmental Protection, the Portland City Council, and Portland Planning Board. 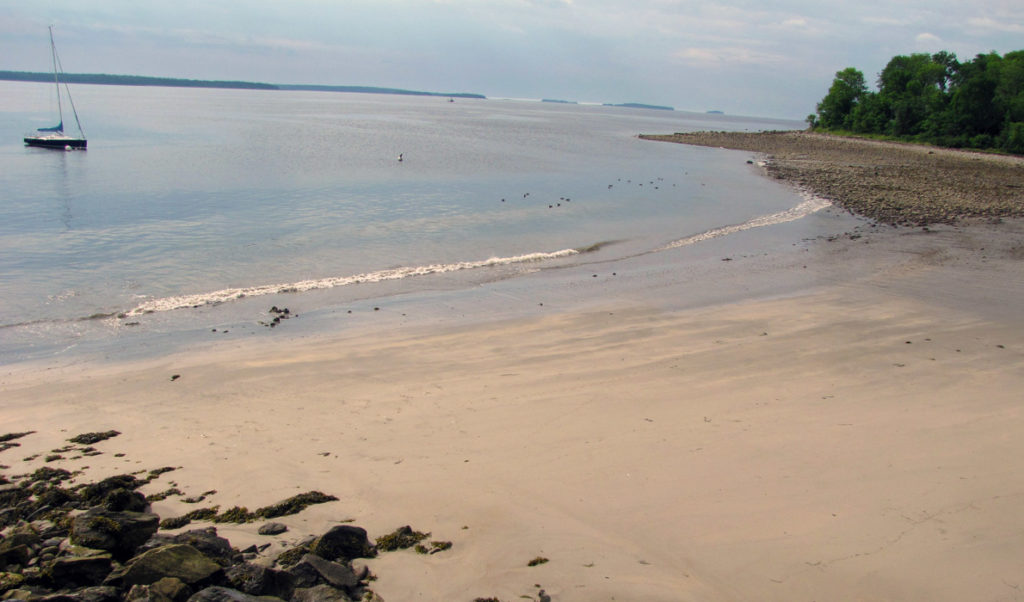 A beach in the Midcoast.