When Bert Jongerden took a job as operations manager at the Portland Fish Exchange in 1991, the quasi-municipal nonprofit auction house handled 30 million pounds of fish that year.

Jongerden stayed five years, then moved on to other endeavors. In 2007, when he returned to the exchange as general manager, operations had declined to 8.4 million pounds.

His job? Find ways to sustain the institution through a dramatically altered fishing environment. His initiatives included working to entice back boats that had fled to Massachusetts ports, establish an internet-based auction platform, and repurpose surplus space to lease for new income streams. He’s also been involved in fisheries management, serving on various advisory panels, boards, and commissions.

After 13 years as general manager, Jongerden plans to retire at the end of 2020. But with 40 years overall in the seafood business, he maintains the long view.

“There’s a realization that, if the exchange closed, an important piece of infrastructure would be lost,” he said. “It’s in the interest of the state and local economy to keep this place moving. A lot of people depend on it.”

Born in Eemnes, Netherlands, Jongerden moved to Portland with his parents in 1960. Graduating from the University of Maine, he got into the restaurant business, eventually leasing space in Scarborough to open his own eatery. Five years later, he’d had enough.

His seafood career in sales and production began in the 1980s at Hobson’s Wharf in Portland. The exchange opened that decade as the nation’s first all-display fresh seafood auction. It transformed a haphazard marketplace, where fishermen scrambled to negotiate sales with wholesale buyers before perishable catches went bad, and placed the catches in a refrigerated warehouse for inspection and then noontime auctions. Payments to the fishermen were guaranteed.

When Jongerden signed on as operations manager in 1991, the exchange had solidified Portland’s role as the No. 1 East Coast port for groundfish, employing close to 65 people, and capturing most Maine and some southern New England groundfish landings from 350 boats.

Jongerden moved on to other endeavors, including work for Prospect Harbor’s Stinson Seafood; Lewiston hardware and building materials company Emery Waterhouse; and Hannaford.

Meanwhile, groundfish stocks were declining. Regulators began cutting back on fishing time and catches. Fishing consolidated into a fleet of mainly larger boats that could operate further offshore. Some smaller boats moved to Massachusetts ports to be closer to the fishing grounds; others were sold or scrapped. By the 2000s, landings and vessel numbers at the exchange were dropping dramatically.

Jongerden returned in 2007 to a new environment. The exchange remained a linchpin to the future of the groundfish industry, but it had to innovate and tighten its belt to stay in business.

First, he aimed to reestablish good will with smaller boats.

“I had a feeling that our model would be based on small boats going forward,” he said. “Because I’d worked here in the past, I knew a lot of the boats and owners. It was just getting the conversations going again, working with the boats to see what their needs were and make adjustments accordingly.”

In 2008, he oversaw the transition from the traditional “outcry” auction to an internet platform. The platform had mostly been completed before he arrived, but it was a matter of getting the computers and networks hooked up and educating buyers, he explained.

The auction is based on warehouse management system software that guides inventory disposition and creates lots that are transferred into an auctioneer program. Buyers no longer have to be on-site to bid; instead, they log in and the program displays fish organized by species and market grade.

“It’s based closely on the call-out auction,” he explained. “That was done on purpose so there wouldn’t be such a learning curve.”

The electronic auction reinvigorated the buyer base. At one time, large wholesalers kept buyers in Portland.

“But once volume started winding down, the big companies couldn’t justify keeping employees here,” he said. “So there was strong demand to get the electronic auction up and running. When that happened, there was renewed interest.”

To find new sources of income, surplus space in the 30,000-square-foot building on Commercial Street was leased to other seafood tenants. Additional cash was raised by warehousing lobster bait and handling seafood not suited for sale by auction.

In 2019, the exchange managed close to 3 million pounds of fish from 40 to 50 boats and is providing services for aquaculture operations. It recently unloaded a hundred thousand pounds of farmed kelp and is now grading farmed oysters.

“We just keep trying to find new markets and new ways to offer ourselves up,” he said.

The pandemic set unprecedented challenges when landings tumbled. Demand and prices have since improved somewhat.

Still, “For us and a lot of businesses on the waterfront, if we can hunker down and get through COVID, that’s all we can expect,” he said. “I think there will be a fundamental shift in the way seafood is consumed, now and into the future. Retail will be a big part of it because more people are consuming seafood in their homes. Restaurants won’t come back the way they were. There will be a lot of interest in boat-to-consumer sales. We’ve got to see how we can fit in here, in the best manner possible.”

The exchange’s board of directors has begun a search for a new leader, who will be tasked with continuing to bring new opportunities to benefit commercial fishermen and Maine’s emerging aquaculture industry. 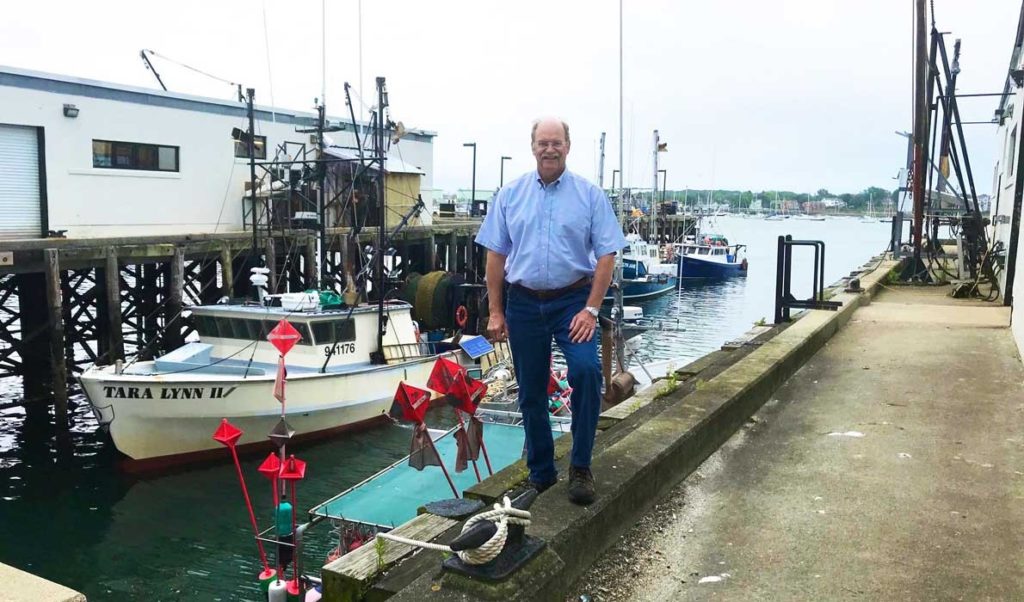 Bert Jongerden is ready to retire after 13 years managing the Portland Fish Exchange.