Donald Trump may have carried Washington County in the 2016 election, but you wouldn’t know it by the reception progressive Democrat and New York City Mayor Bill de Blasio got in Eastport on Jan. 13.

The mayor, in town visiting his aunt, chatted over lunch with a group of 15 people affiliated with the Eastport Arts Center, an organization his aunt helped grow and support. Later, de Blasio spoke and fielded questions from about 75 people who paid to attend, with proceeds going to the arts center.

The presence of a mayor, who serves a city of 8.5 million, in the small waterfront town of Eastport, population 1,200, made for a striking contrast. Yet common ground was found, particularly in a moment during the lunch of seafood chowder and moose-meat chili. Eastport City Manager Elaine Abbott told the big-city mayor his example and words inspired her to keep working to improve life for her town. He responded by noting that both face the same challenges—pursuing big-picture goals while providing services for residents who often are focused on their individual needs.

He later told a story about an interaction with a constituent early in his tenure. Working out in a gym in Brooklyn near his home, a man approached the mayor to ask for city help in getting a raccoon out of his back yard. De Blasio discussed the sorts of things city government was and was not responsible for, and prepared to end the exchange. The man said, “OK, but what are you going to do about my raccoon?”

The mayor has held 50 town hall meetings with constituents since being elected, and appears on a weekly radio program where he fields calls from city residents; New York, he joked, could be called “land of the very opinionated.”

One caller complained about a rule affecting businesses, and offered a solution. De Blasio admitted, on-air, to not knowing about the problem, and two years later, the caller’s suggested fix is now city policy.

Such give and take is an example of good governance, he said.

New York had made national news a few days earlier when de Blasio announced the city would sue the country’s five biggest oil companies for their role in causing climate change, arguing they knowingly sold a product that caused harm to people and the environment, much like tobacco companies, which were sued by states in the 1990s.

“Lots happens in the private sector that we end up paying for,” de Blasio said, defending the action.

The city also is divesting its pension and other holdings—$5 billion—from fossil fuel-based stocks, a move he believes will get the attention of that industry.

That action embodies the bumper-sticker principle from the 1970s, “Think Globally, Act Locally,” he said. At 56, de Blasio came of age in that decade, and was active in pursuing alternative energy and political justice in Central America, among other issues, he said.

These were areas in which “grassroots movements fought back and achieved,” he said. In answer to a question from a woman in her late 20s, wondering how a white man of his age could address the concerns of people of color, immigrants, and young people, de Blasio had a blunt answer: Does it matter if young adults don’t support elected officials? Wouldn’t she and other activists continue their work?

The topic of his talk was the future of democracy, and while he admitted that “it could be in peril,” with moves by the Trump administration, corporate dominance, and wealth inequality, he remains optimistic.

“I worried a lot in the week after the election,” he said, concerned that people would withdraw from politics. Instead, the day after the inauguration brought “the largest protest in U.S. history. I know that Eastport had its own protest. Well done, Eastport,” he added, which drew laughter from the audience.

The city’s response to climate change and the Trump administration’s decision to withdraw from the Paris agreement is another example. Rather than “curl up in a ball,” de Blasio said, city officials asked themselves, “What can we do?” which led to the divestment and lawsuits, a way to think globally and act locally.

“People talk themselves out of their own power,” he said. An example of change that has come from citizen pressure is the majority support of same-sex marriage, a reversal of opinion in just a decade.

The city’s recent move to a $15 minimum wage seemed impossible a few years ago, but public sentiment eventually supported it.

The same public impetus stopped the repeal of Obamacare.

“The grassroots energy affected a lot of people in the Congress,” he said. “The action isn’t in the lurid imagination of the president. It’s in the mind of everyone else.”

Democrats lost the White House because the party “did not speak to middle class and working class people and give them a vision they could believe in,” he said. “I think we’re in the middle of an identity crisis,” he said of the body politic, but as a progressive, de Blasio suggested the country’s values are beginning to line up with his views.

Befitting the setting of his talk, de Blasio also spoke on culture and the arts center.

As far as Eastport is from New York—literally and figuratively—it clearly has a hold on de Blasio.

“This place is growing on me all the time,” he said.

Earlier in the day, after a breakfast at the WaCo Diner, his host’s car got stuck in mud. The mayor’s aunt Jean made a few phone calls, and soon folks arrived to pull the car out.

“That happens every day here,” he said, a sign of a healthy community and a healthy democracy. 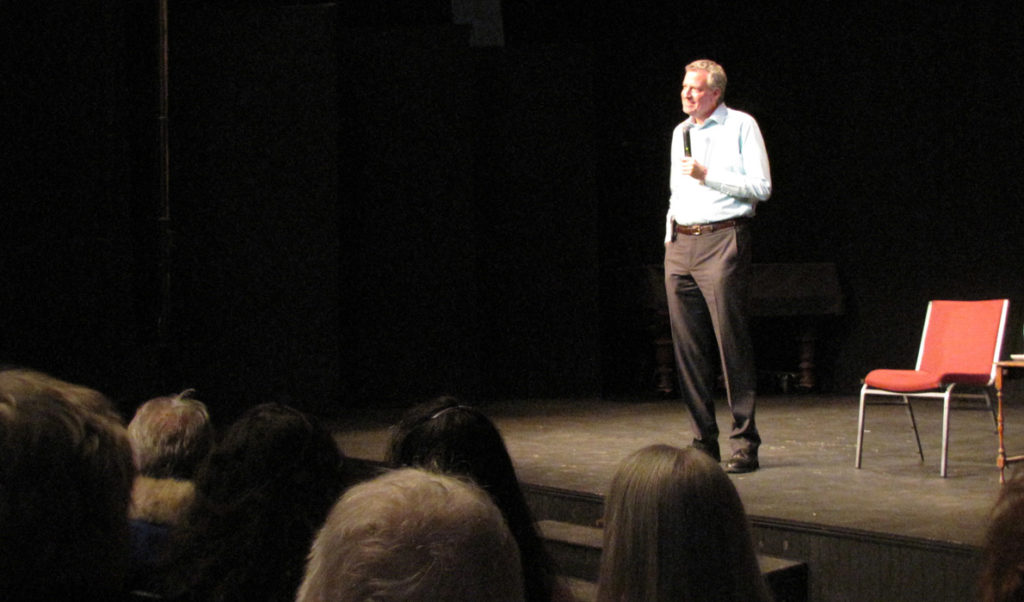