In a documentary about his life and work, award-winning Native-American writer N. Scott Momaday stated, “There is no such thing as poetry in Indian traditions.” Interviewing him in March, NPR reporter Lulu Garcia-Navarro asked him to explain.

“It’s a storytelling tradition,” Momaday said, “so you have songs and prayers and spells and stories. But you don’t have verse.”

Jason Grundstrom-Whitney’s first collection, Bear, Coyote, Raven (Resolute Bear Press, Robbinston, Maine, 2020), features nearly 70 poems that both confirm and disprove Momaday’s claim. A Bear Clan member of the Passamaquoddy Tribe, Grundstrom-Whitney offers his share of songs, prayers, spells and stories—especially the latter—inspired by his tribal origins, but his poetry is formed from stanzas and the engaging rhythms of the speaking voice.

The three creatures of the title are friends who interact in human and animal ways. They gather around a sacred fire, tell stories, make mischief, and regard the world with humor and despair. They listen to Charles Mingus (“Avian Bebop”), stumble drunk down the streets of Machias (“After Raven Stole the Light”), and experience misadventures while dining from a dumpster (“The Continuous Buffet”).

Several poems reference modern-day issues such as habitat loss. In “Sawdust,” Bear looks for a place to hibernate: “Around developments we stole, / even high mountains leveled for mansions.” The poem ends with a question: “Where to go / when there is nowhere to go?”

Another poem, “Thin Bears,” addresses climate change. Three emaciated ursine figures appear in Quebec City, driven south by the melting Arctic. With no place to hunt, these bears feed on the “hormone-fed sides of beef” they find in the city. The empathetic Bear “felt death reaching in his new language— / drought, hurricanes, fire, auto-immune illness. / It seemed he added a new word daily.”

Other creatures make appearances: owls, mules, deer, and a philosophical and ancient desert tortoise (“They figured she had been shot with musket fire / in the 1600s”). In the lovely “Dragonfly,” Bear observes this compound-eyed insect perched on his kayak with some envy. “My eyes lose most of what surrounds me— / insects, birds, frogs, jumping fish, menagerie clouds,” he muses, while the dragonfly “sees more of me than I know myself.”

When the three friends roam the western U.S. in the latter part of the collection, sometimes hitchhiking, this reader turned to Google to look up some of the tribal names: the Tohono O’odham, who live in the Sonoran Desert, the Tarahumara from Chihuahua, Mexico, and the Haisla of British Columbia. And what is “counting coup”? Wikipedia explains it’s a ritual of the Plains Indians for gaining prestige by touching an enemy and escaping without being wounded.

In a recent article in Publisher’s Weekly, Grundstrom-Whitney explained how the book’s use of white space “mirrors the deserts of the Southwest” where he has spent time with various tribal nations, while the poems’ rhythms reflect the fact that “drumbeat is part of the heart—at Native gatherings you hear it.” Several poems feature recurring sounds: “ka thum/ka thum” in “Eagle Woman” or the derisive “squawk-squawk-squawk” in “Bear Leaves Business.”

In the same article, Resolute Bear Press publisher Valerie Lawson explains how, when she and her husband, Michael Brown, were assembling 3 Nations Anthology: Native, Canadian & New England Writers (2017), she discovered “the richness, and relative scarcity, of indigenous writings in the region” and felt compelled to uncover it. Kudos to her and Brown for introducing us to Grundstrom-Whitney’s remarkable storytelling—and poetry. 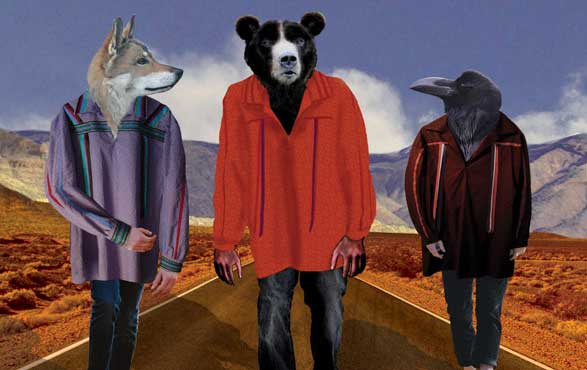