There were 16 separate weather and climate disaster events topping $1 billion in recovery costs in the U.S. in 2017, with a cumulative cost exceeding $300 billion. It clear that it’s cheaper to prepare and minimize the clean-up rather than wait and pay to rebuild after the fact. The smart money is on investing upfront in infrastructure that can withstand more frequent disasters.

As sea levels are rising around us, investments in disaster-ready infrastructure often stall when it comes to the implementation phase, especially in small communities, or in those without a lot of resources. New sea walls, flood proofing, or elevating buildings come with daunting price tags. Fortunately, a nascent framework for funding adaptation strategies is developing. That effort is well ahead of building a funding framework for managed retreat in the U.S., another long overdue conversation.

While the cost to prepare is formidable, it is becoming more expensive not to do so.

At the end of last year, after the U.S. experienced back to back (to back…) hurricanes, the major credit rating agency, Moody’s Investors Service Inc., announced it would update its credit ratings to include the physical effects of climate change. Under this new definition, if a city or state is vulnerable, including if a share of its economic activity comes from the coast, and is not taking steps to reduce its vulnerability, the credit rating can go down, causing interest rates to rise. Maine is among the states affected by this policy update.

This news reads as an ultimatum to start preparing for climate change and provides a clear economic incentive to act sooner rather than later.

The silver lining is an emergence of innovative financing options to support adaptation projects. The newly emerging green bond market began among banks in 2007, including the World Bank. These bonds finance projects that provide environmental or climate change benefits and allow borrowers access to the $100 trillion bond market.

Green bonds are an attractive option to investors who see opportunity in renewable energy, clean transport, low carbon buildings, sustainable land use and water and waste management, and adaptation projects. The U.S. is currently the largest issuer of green bonds. Europe also has developed a green bonds market, and China’s tightening environmental regulations have helped grow its green bond market to $48.8 billion. While more suited to larger municipalities, small towns are also able to access the green bond market.

For smaller municipalities, linking different forms of financing and bundling projects with neighboring towns is a way to access these innovative markets. Additionally, there can be reputational benefits of green bonds, termed the “green halo” affect, where if a company or municipality issues a green bond or environmental impact bond, their other bonds may become more competitive. Certain investors, including the younger generation, are drawn to these investments.

John Cleveland, executive director of the Boston Green Ribbon Commission and president of Innovation Network for Communities asks, “Will we have a vicious cycle or a virtuous cycle? We need to get ahead of it, make the right investments, create investor confidence, and the quicker we can move to accepting that, the quicker we can get on with it.”

Where there is a will for local adaptation projects, there may be a way, but where there is financing, we have a lot more confidence that communities will truly be prepared for what’s coming our way.

Heather Deese is executive vice-president of the Island Institute. Susie Arnold is an ecologist and marine scientist with the organization. Allison Carmen is an infrastructure finance specialist with the Institute. 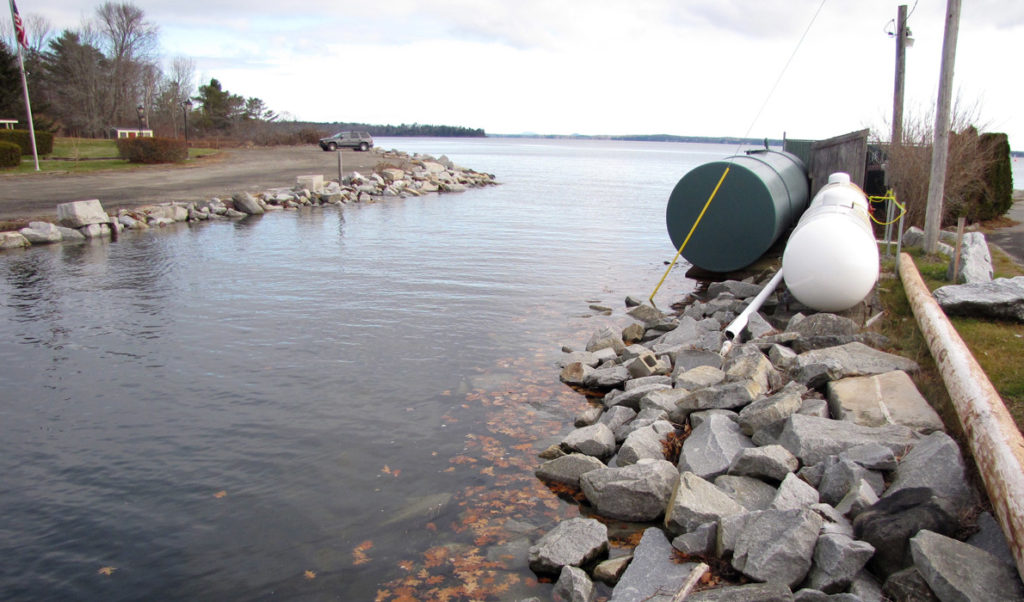 Fuel tanks sit close to the water during a high-tide event in Lincolnville Beach.