In the 20 years she’s been operating her kayak business, Karen Francoeur estimates she has introduced well over 1,000 people to the joys of paddling on Maine waters.

“I started my business when kayaking was becoming a big thing,” she said, back in 1997.

The sport took off, she remembers, when companies like Old Town began manufacturing affordable plastic boats.

“Kayaks could be more accessible,” Francoeur said, easy to manage on and off the water, and less constricting of the paddler, especially for those who feared rolling over and getting stuck.

But with that accessibility comes risk.

Kayakers and others in Maine were shocked in mid-June to learn of the death of a long-time guide and one of his two clients in the waters off the Hancock County town of Corea. The deaths have been attributed to a sudden squall that flipped the boats, and exposure to water that was still only in the high 50-degree range, with the victims probably succumbing to hypothermia. The lone survivor, who had clung to her kayak for hours before being rescued by local fishermen who helped in the search, had a core temperature of 80 degrees, authorities said.

The deaths off Corea were puzzling to many, because most of the fatal kayaking accidents in Maine have come when paddlers were not wearing their personal flotation devices, or PFDs, and were unexpectedly pitched into the water. Trying to don a PFD while struggling in the water can be virtually impossible, Francoeur said.

But cold Maine waters, even while wearing a PFD, also can be deadly, she said.

A DAY ON THE WATER

Francoeur’s Castine Kayak Adventures offers tours, group classes focused on various skill sets and maritime conditions, individual lessons and she even trains those who want to be kayak guides.

Francoeur, who lives in Orono half the year, began her career on the water when she worked as educational coordinator for the Penobscot Riverkeepers group, “taking kids from the source to the sea” in paddle craft as part of an effort to build awareness of the challenges facing the river.

The former owners of the Dennett’s Wharf restaurant in Castine talked to Francoeur about starting a kayak business in town to give visitors more recreational options. She persuaded the New England Outdoors Center in the Katahdin region to start the business, and she began guiding tours.

A year later, she bought the business.

“There’s worse things than being a kayak guide,” she says with a laugh, and that’s what she’s been doing for the last 20 years.

“People come to Maine, see water everywhere, and they want to see what’s out there,” she says of the draw. Early on, kayakers were anxious about climbing into a boat, but as the sport became more popular, that waned.

Some clients merely want to experience a day on the water.

“We see eagles, we have three colonies of seals here,” she said.

Others want to learn.

“On our half-day tour, people learn a lot of technique,” she said, with some clients saying they learned more than in week-long excursions with other outfitters.

Good technique can help the paddler cover more water with less effort, alleviate back strain and reduce the risk of capsizing.

“In 20 years, we’ve only had about one capsize a season,” Francoeur said.

One of the most important skills paddlers learn is how to self-rescue if a boat tips over and the paddler falls out or swims out. One method relies on inflating a sleeve that fits over a paddle blade, holding it perpendicular to the boat, and using it as a platform from which to push off the water to swing one’s body onto the deck of the boat. Once face-down on top of the boat, the paddler must then slide his or her legs into the cockpit.

It’s not easy, especially if the waves that tipped the boat are still present.

From 2000 to 2012, Francoeur and others led a Paddle Smart safety symposium in the Bangor area, using an indoor pool to demonstrate skills.

For salt water, Francoeur stresses, paddlers must have boats at least 15-feet long with waterproof bulkheads near the stern and bow. The bulkheads

limit how much of the boat can be filled with water, which affects self-rescue.

Francoeur has seen paddlers in what she considers appallingly dangerous boats for open saltwater, often without wearing PFDs. She isn’t reluctant to scold those who rent open-cockpit kayaks—which are inappropriate for the ocean—to novice paddlers. Though she is approached by unskilled people wanting to rent her kayaks for the day, she refuses to do so.

“I turn away so much business,” she said, but she believes her response is the only ethical one.

But it doesn’t take much prompting to get Francoeur to talk about the joys of being on the water—guiding a woman for her 90th birthday, paddling with a group by moonlight, helping young families introduce their children to the sport.

The tragedy off Corea can educate.

“We always hope that when something like that happens, that people can learn from it,” she said. “It helps people know how dynamic the sea is.” 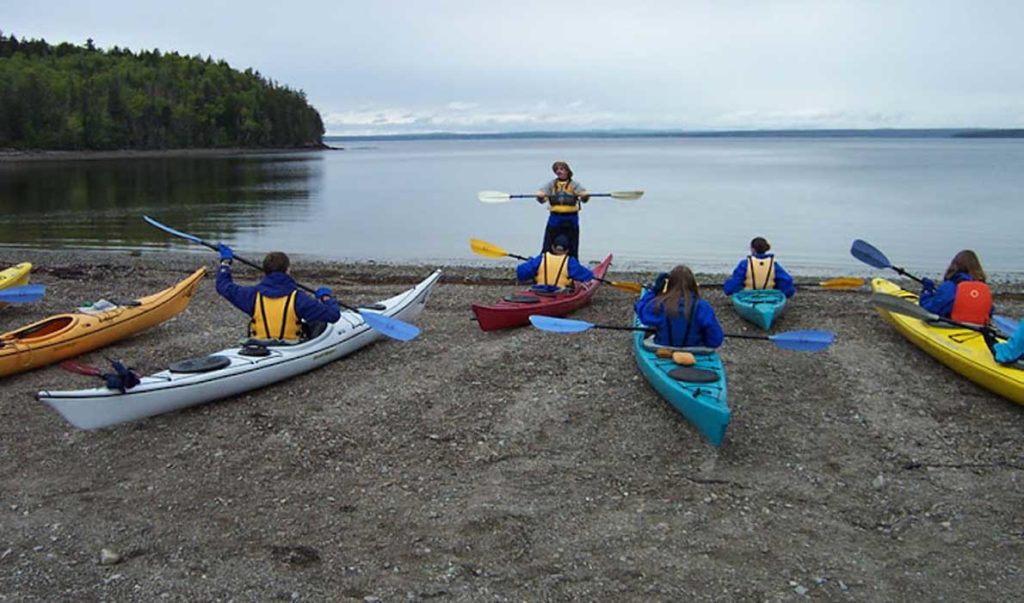