Maine is where many people, famously Scott and Helen Nearing, found the good life. I’m old enough to understand that the “good life” is a pretty subjective term, and can apply to widely divergent ways of living.

I’ve been blessed with food, clothing, shelter, and decent health all my life, and rewarding employment in adulthood. I have friends and family that I love, a pretty tolerable community, and sufficient faith to get me through most tight spots. Really, how could I want for more? And couldn’t I describe it as “the good life?”

Remember Garrison Keillor’s A Prairie Home Companion sponsor, Ralph’s Pretty Good Grocery? Ralph’s had the motto, “If you can’t find it at Ralph’s, you can probably get along without it.” (Actually, that comes close to describing most island stores.)

Rather than claim my life as The Good Life, which has a slightly self-satisfied tone, I’d rather claim a pretty good life. If I don’t have it, whatever it is, I have probably found I can get along without it.

For example, I have a pretty good kitchen which I love dearly, hardly changed from the turn of the 19th century. It measures roughly 15 by 15 feet. It has five doors: one to the pantry, one to the wood room ell, the back door and truly main entrance signaled by the very clangy doorbell, one to the dining room, and another to the living room.

It also has two windows. Along the one door-less wall runs a counter with cupboards beneath and a cupboard above and the sink above which is one sink.

So you tell me: where would I put a dishwasher if I decided that I needed one? Of course, I don’t think I need one. It isn’t part of how I would describe the good life, but some of the people I live with, I suspect, wish there were such an appliance.

People with dishwashers can rinse and stash dishes away giving a kitchen the appearance of one where dirty dishes are not suffered to remain. In my kitchen, procrastination sits reproachfully stacked in the sink and on the counter and kitchen table until guilt or necessity drives someone to the dishpan. I don’t exactly like washing dishes, but I don’t mind it. Like cleaning house and, especially, writing, I like having cleaned or having written. I feel pretty good when the task is done.

For some people, I suspect, a microwave is part of the good life. For years, I had no microwave. When Toby moved in, he brought his. I understand the utility of such a thing, and for Toby, who likes to rewarm his coffee, the microwave is virtually a necessity.

I don’t rewarm coffee. I drink it while it is hot. However, the microwave has proved to be pretty good for all the purposes those buttons say: warming a plate of food, thawing something, melting butter or chocolate when baking, especially in summer when there is no warm woodstove top to do the job.

The good life might involve granite counters. I hate granite counters; they are cold, and if you drop a glass or plate, they chip or shatter. I have a pretty good enameled kitchen table, cold enough to roll pastry on, waterproof and easily wiped up, and light enough to shove around the kitchen if I need to rearrange.

The counters are zinc-covered wood. It is the sort of thing you have to get used to, but it is pretty good and even though I can smash a plate if I drop it, I have a shot at it kind of bouncing instead. Zinc requires genuine elbow grease to clean, but that is pretty good, too. I burn calories while I clean.

All in all, I have a pretty good kitchen for my pretty good life. If it were more sumptuously equipped, easier to clean, and roomier than it is now, there’s not much I would do that I don’t do already. So it is with most of the other parts of my life.

Luxury is fun to visit, but I wouldn’t want to live there. I get a little itchy for dishes to wash, some mending to do, or a bit of tidying up, the small ordinary things of a pretty good life.

P.S. How encouraging to hear from other Match Sufferers (see June’s column). We are not alone. Those who wrote commented on feeling like it was something they were or were not doing. It isn’t you at all, my dears. It is the damn matches.

Sandy Oliver is a food historian who lives, writes, cooks and gardens on Islesboro. 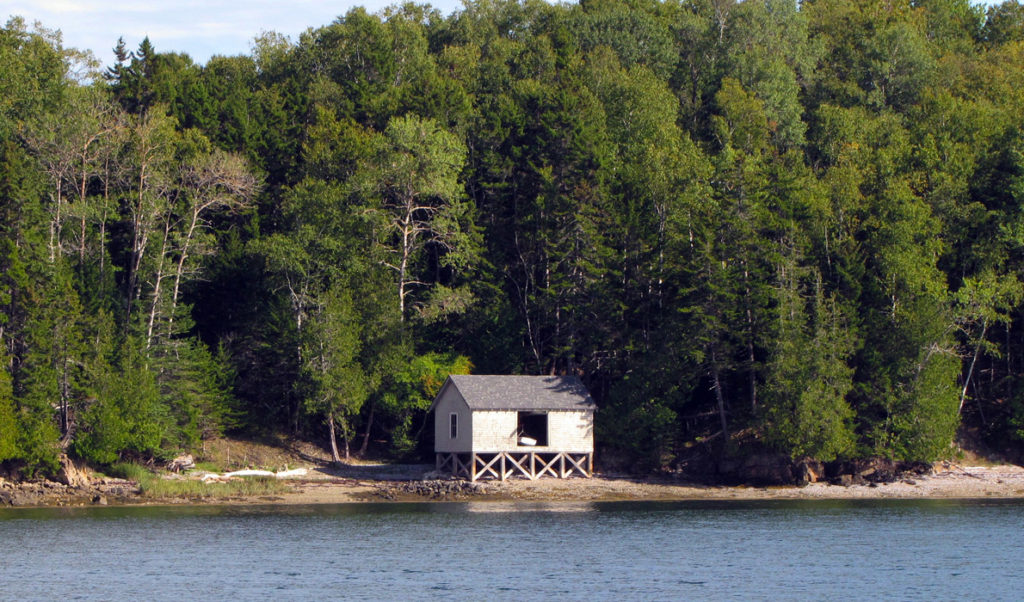 A boat shed on the eastern shore of Islesboro.