Because I go back and forth between Matinicus and Rockland a lot, and because our island doesn’t have a daily ferry or mail boat, and because the pilots who fly for Penobscot Island Air are friends, I spend probably too much time hanging around underfoot in the air service office at the Knox County Regional Airport. Back sometime in early March, we were standing around gabbing, and one of the pilots who works there asked me, “What are you doing on Saturday the 18th? There’s a chili cook-off and fly-in at Wiscasset, and the chili will be good!”

Welcome to my new subculture. You have perhaps heard of the “hundred dollar hamburger?” Some pleasant Saturday any recreational pilot might get out her plane, or rent one, and fly someplace to feed her face at a flying club pancake breakfast, or an experimental aircraft show, or a big fly-in where they might have taco trucks or a local VFD fundraiser chicken barbecue or who knows what.

Maybe you’re flying somewhere you’ve never been before, with serious trip planning and navigation involved. Or, maybe it’s your old stomping ground and you hope to run into old friends.

You walk around and examine the other airplanes, hang out for a while with like-minded nerds and veteran pilots from way back with stories to tell, until eventually it’s time to go home. Chances are it’s a bit windier on the flight back, making for a bumpier ride. It’s a fairly complicated way to get a hamburger (or a plate of pancakes, or a mess of chili).

Clearly, that’s not the point.

When Jeremy the pilot mentioned that Wiscasset fly-in, I thought, “Uh-huh, sure. Like the weather’s actually going to cooperate for a fly-in at a little coastal airport in the middle of March. They’re calling for another ten feet of snow this week!” I kept my skepticism to myself, but didn’t expect to get there.

Island residents are somewhat more conscious of weather than perhaps some other folks. Anybody who works outdoors—whether fisherman, farmer, utility lineman or anybody else whose workday is determined by the weather—learns to pay attention.

My family pays attention too much; it’s rather an obsession, maybe a sickness. Pilots, whether by profession like Jeremy (he is also a local flight instructor) or—like me—just because they don’t know any better, become weather geeks for sure.

The TV weather isn’t always terribly useful, though; for some unknown reason the meteorologists in suits spend too much time talking about the weather vertically, as in: what’s going to fall out of the sky, and how much of it will there be on the ground when it’s done? If anything—rain, snow, hail, or meatballs—is falling out of the sky, it probably isn’t a day for me to be out playing airplane. Whether we get a misty drizzle or the Johnstown Flood, I’m not out flying anywhere just for fun.

What a pilot (and a fisherman, and a lineman) wants is the weather forecast horizontally, as in: which direction will the wind be blowing, and how hard?

As March 18 approached, the forecast was for a perfectly stunning day: bright sunshine, light breezes at most, and no big scary blobs of anything lurking around the perimeter of the radar map to make a pilot nervous. This was certainly not normal—and not to be passed up.

I called up the air service, booked a regular passenger flight off Matinicus first thing that morning, and met up with Jeremy. We pulled the borrowed 1950-something Cessna 170 “taildragger” we’d fly to the event out of its hangar. Alongside another small plane with two other guys from the Knox County Flying Club, we flew southwest along the coast over the peninsulas and inshore islands and enjoyed the kind of scenic trip that makes you grateful you woke up that morning in the state of Maine with a pilot’s license. That sound a bit mushy? Forgive me.

Eva Murray lives on Matinicus year-round, where she writes, volunteers as an EMT, and runs the island’s solid waste/recycling program. She is the author of three books, most recently Island Birthday, an illustrated children’s book, which shines a light on the logistics challenges and the close-knit communities any islander might experience. 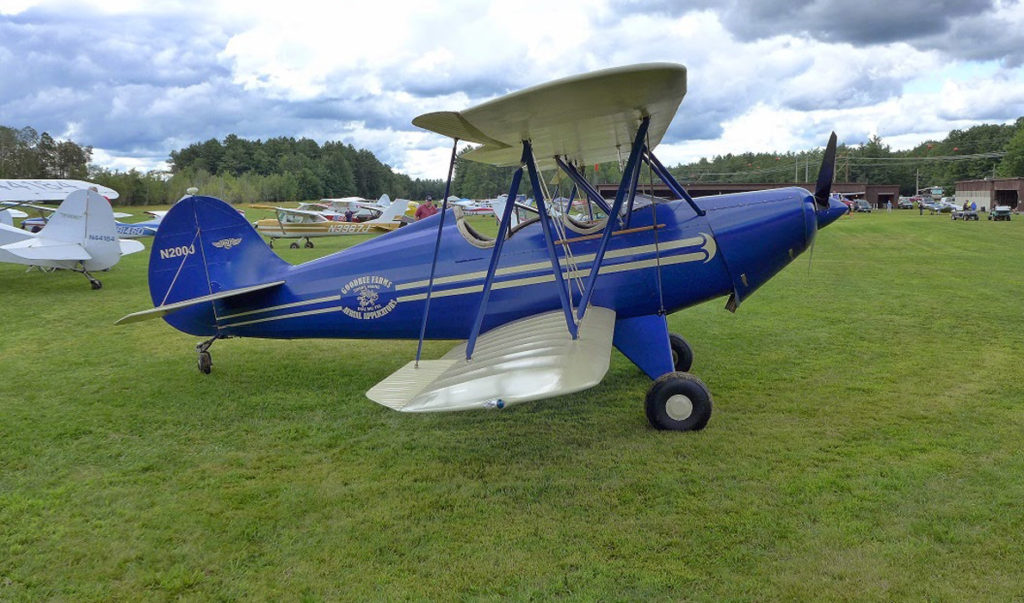