We Americans are generous about offering our children educational opportunity. In some European countries, high school graduates are “sorted” toward different post-graduate options based on test results. Those options dictate very different fates, which seems cruel, especially if one’s child is a late bloomer or has suffered through some trauma that depresses test results.

Still, the concept has some merit, in part because it assumes all our kids will pursue education after high school, even if it’s not a four-year college degree.

There’s been an odd backlash in recent years against the idea that attending a four-year college is always a smart move. It’s true that four years at a liberal arts college isn’t the ticket to the employment status it once was, as degrees become more prevalent (Maine’s four-year degree rate is 18 percent). But much of the backlash, and some of the data suggesting that a college degree isn’t a golden ticket, comes from the aftermath of the recession of 2008. Young folks graduating college in the years following the recession were seeking work in the worst economy in 70 years.

In Maine, there has been encouraging unity among elected officials during this decade for creating educational opportunity for all our high school grads. Beyond the education offered by fine institutions like the University of Maine and Bowdoin College, there is the community college system, as well as all sorts of shorter-term training programs, preparing young folks for jobs in fields like solar power, IT, health care, and building trades.

But how do we get teens to find those training opportunities, and how do we prepare them to succeed once enrolled? One effort addressing those concerns is the Eastern Maine Skippers program, which works with high schools along the coast in Vinalhaven, Stonington, Blue Hill, Ellsworth, Bar Harbor, Harrington, Milbridge, and Jonesport-Beals. Skippers offers a marine-based curriculum to students who join the program, and much of the work is done outside the traditional classroom.

The Island Institute (publisher of The Working Waterfront) works closely with the Skippers program, and because of that connection, I was privileged to be asked to help judge student projects last spring at The Grand in Ellsworth.

The charge given students was, “How do we maintain sustainable ocean food systems?” The participants, working as teams within their schools, did science-based research on such topics as raising scallops, Arctic surf clams, and kelp; understanding diadromous fish like smelt and salmon; and redesigning fishing gear.

A couple of the presentations that stood out to me were by students from Deer Isle-Stonington High School. One student worked on modifying a lobster trap so it would catch winter flounder but not lobsters. Another group designed a shrimp trawl, and in a video, demonstrated how they tested different versions of the trawl, standing on a bridge as the falling tide simulated towing.

One of the young men from the student team explained the video for the audience. As he stood calmly on the theater stage, looking at the screen and commenting, without a script, about what worked and why, I guessed that he probably would not end up attending a liberal arts college. But clearly, he was bright, and probably would go far, equipped with confidence and natural verbal skills—honed through the Skippers experience.

This year, program participants are considering the question, “How can individuals and communities manage and restore local fisheries?” I attended a student event leading off that inquiry at Schoodic Education & Research Center in late September.

Some of the smartest people I have met over the years never went past high school. Most of them continued to learn by observing others, reading, and trying new things. But if we can offer more training and education for folks like this young man, our future will be bright. 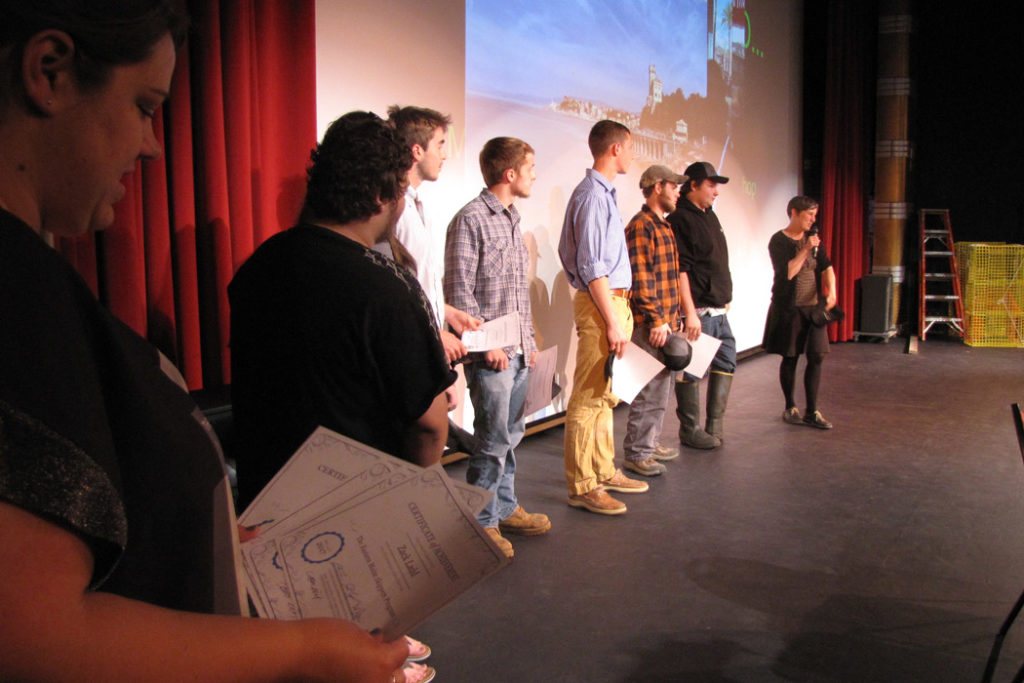 Students are recognized at an Eastern Maine Skippers program event in Ellsworth.