Great Cranberry Island’s 40 or so year-round residents know that if roads need to be plowed, trees cut, fields mowed, firewood split, land cleared, wells drilled or anything hauled, they can call Blair Colby.

Colby can be relied on to bring to bear his extensive collection of hard-used Franken-trucks, assembled from innards of broken-down vehicles and given new life with the spark of his skill and imagination.

“This one here I call ‘The Executioner,’” Colby says at his shop/house/yard located on the two-mile lane that traverses the island end to end. The Executioner, parked at Colby’s doorstep, is a noticeable landmark. A 1942 GMC designed as a U.S. Army cargo truck, the model was nicknamed “Deuce and a Half” for its 2.5-ton capacity, and it still faintly bears an Army star on the passenger door.

Now it’s a bashed-up affair—passenger door tied to the frame, driver’s front window missing, heavy-duty cable winch and frame welded to the rear, vise mounted on the front bumper, chainsaw mounted in the vise, “Bubba’s Truck” sign zip-tied to the dented grill, and half a deer horn roped to the hood.

“That’s my broken horn,” says Colby, a gregarious person known around the island for helpfulness and humor.

“It’s kind of funny,” he continues. “I was going through my divorce, unfortunately. The judge said, ‘Young man, you need anger management counseling.’ So I got this truck and brought it here. That was my anger management project. I took this motor out of a Jeep, reinforced the frame—put eight-by-eight half-inch angle iron all through it—and put on an old winch. Now I use it for hauling logs and moorings and boats and whatever. It works great.”

An Allis-Chalmers tractor of late 1940s or early 1950s vintage looks old-fashioned but in good repair.

“This is my fat-bottom girl,” Colby says, referring to the wide-rim rear tires. “My brother-in-law’s father had it, then his son had it, then his son got sick and he didn’t want to see it just settin.’ So I took the engine apart and put in new valves and a head manifold and new tires and all kinds of stuff, and now this thing runs perfect,” well-suited for pulling his log trailer or chipper or anything else needing a pull. “Always ready to go, never lets you down.”

Colby was born and raised on Great Cranberry, but left as a young man to work in New Hampshire for John Deere and other heavy-equipment contractors.

He got tired of the smoke-filled shops, injured himself, returned home, and set up as B/C Equipment, offering services, for nearly two decades now, on the mainland and the island, splitting his equipment and time.

“It’s not rocket science. These old trucks are fairly simple to work on.” His auto lift is two stacks of tires. He uses a front-end loader to lift a vehicle on top.

“I tell people, ‘I’ll work on your car and you’ll have your brake pedal, but never mind the dent in the fender: It probably came there from the loader,’” he says. “But a lot of these cars today you can’t do anything.  They’re all computerized, so you got to have a computer to download the information. People have gotten stupid with that stuff. Older cars, you can figure out and keep running.”

Quite a few vehicles are parked around the yard in various stages of potential. He mines some for parts, and stores kindling, spare generators, etc. in a few. Other working mainstays include a ’71 Ford F600 dump truck originally owned by the neighboring island-town of Islesford.

“It had trees growing up through it,” he says. “I pulled it out and brought it home and went through the frame, the engine, the transmission, all the hydraulics. That’s my main plow truck. I put chains on the rear and fill it full of boulders, for weight. It never got any paint but that thing will outwork a new one.”

He and a friend picked up a mud-colored 1956 military truck on the mainland. He built a front bracket, also for a plow. A well-driller friend in New York sold him a pony motor system—a small motor that starts a larger motor. The automatic transmission comes from Canada.

“I put that system on, got a 22-horse Briggs with a 28-gallon-a-minute, two-stage log-splitting pump, put a dump body on the back, and put a big winch on back of that.”

He bought Great Cranberry’s former fire truck, stretched the frame, strapped on an old sander, and installed a new set of radials.

“That truck is handy,” he says. “I’ve been using the sander to lay inch-minus packing gravel down the center of 95,” as the island’s road is dubbed, “then you come along with your York rake and spread it.”

Many antiques are backed into the brush for another day. A GMC Brigadier, a bucket truck and a hybrid with a steam shovel winch that “will pull the side right off Green Mountain if you can hold it down” are just a few.

“When I was a kid, I remember my father and all them guys did everything with these old trucks,” he says. Nowadays, Colby is just a guy trying to make a buck.

“I had hopes for a trophy bride and a big fancy shack and a ranch and a cow. That’s not happening.” He laughs. “But I’ve got plenty of trucks.” 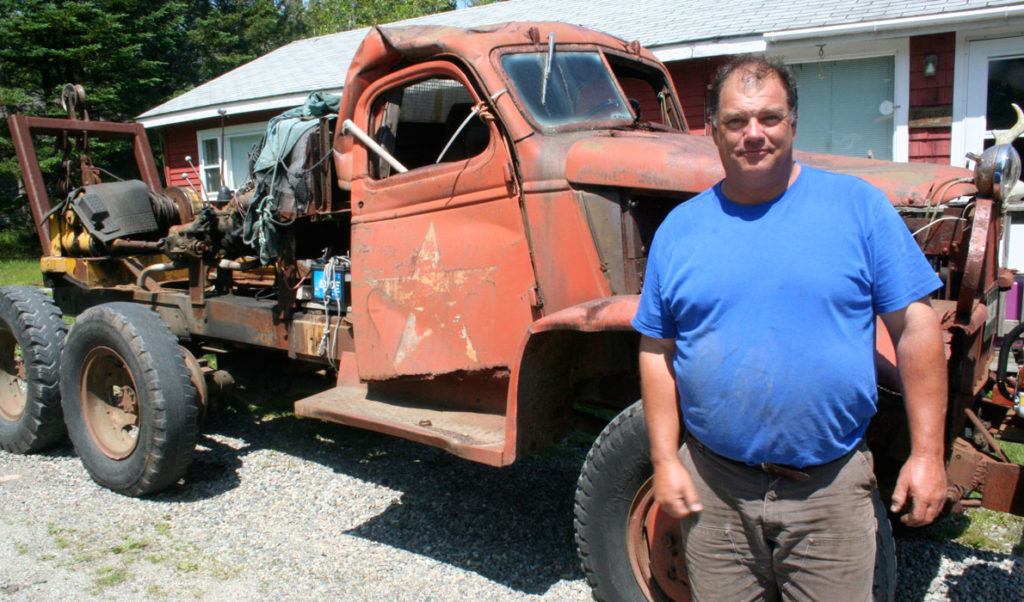 Blair Colby poses with The Executioner.