Year-round residents of the Cranberry Isles have just made it through a rough end of winter to face the fickle brown month of April. In February, the ice-rain-ice weather had yards looking like skating rinks. March had its own kind of nastiness with endless wet snow and high winds causing weekly boat cancellations and power outages.

You don’t have to live on an island to know that April also is a tough month. If it’s rainy, we all face a cold, loathsome mud season, often enhanced by wind. While a sunny April can melt your heart with promises of gardening and delightful days to come, the islands are usually two to four weeks behind inland towns in the blossom department. April is not a particularly green or flowery month out here.

On the last day of March, the blanket of snow is still a foot deep in areas of our yard but more and more the brown grass is showing up. Mornings that start with the need to scrape frost from the windshield turn into sunny afternoons that might reach 50 degrees or more before an afternoon sea breeze kicks in. In my garden, a few snowdrops are out and if I look closely I can find the tips of three garlic plants.

There’s hope that spring is coming, which is just what I need to get me through my least favorite time of year.

It’s easy to feel hope on a sunny day. The longer days and strength of the sun are a tangible promise. When it’s cold and wet, I look for that slight lift at the corners of the mouths of my friends as we complain together that we can’t take much more bad weather. With a knowing nod we share a we’ve-been-through-worse camaraderie at the boat, store, or post office. A misery-loves-company kind of smile with recognition that things will get better.

Hope is there in the knowledge that the stairs at the docks are unlikely to freeze from now on and the floats will be in soon. Hope accompanies the daylight for both the early morning and late afternoon commuter boat trips. No more dark boat rides. There is always hope that the drastic winter weather might have killed off next summer’s mosquitoes.

For anyone having trouble finding hope at the end of winter I highly recommend reading Come Spring by Ben Ames Williams, written in 1940. It is a fictionalized account of the joys and struggles of the first settlers along the St. George River in the 1700s, an area that became the town of Union. Survival was a lot tougher then, especially through the winter. As food supplies dwindled dangerously, one of the characters replied to his father-in-law’s concerns with the words, “We’ll be fine, come spring.” With just the mention of that book, I feel a little more resolute in waiting for spring.

I am reassured that spring is on its way when the migrating birds start to arrive. By April the air is once again noisy with their chatter. Cardinals who stayed quiet all winter are making their calls and I have seen my first song sparrows under the feeder. Not to take any appreciation away from my loyal winter regulars, but after a steady visual diet of chickadees, nuthatches, and drab winter goldfinches, it is uplifting to start seeing a variety of birds.

It is no surprise to me that Emily Dickinson’s poem about hope features bird imagery. When I read it again I wonder, “At what time of year did she write this poem? Early spring in New England?”

Hope is the Thing With Feathers

Hope is the thing with feathers
That perches in the soul,
And sings the tune without the words,
And never stops at all,

And sweetest in the gale is heard;
And sore must be the storm
That could abash the little bird
That kept so many warm.

I’ve heard it in the chillest land,
And on the strangest sea;
Yet, never, in extremity,
It asked a crumb of me.

April may be “the cruelest month,” according to another poet, T.S. Eliot, but we islanders maintain a straining bravery. We know how to deal with this stuff because we’ve been through it before and we know how incredible spring will be when it gets here. We just hope it will be sooner rather than later. 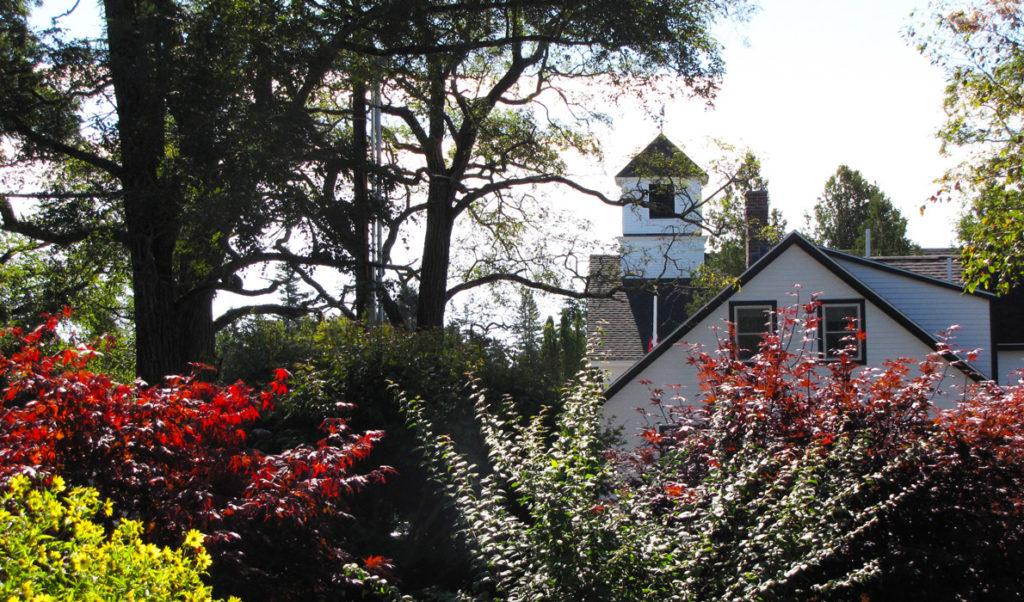