Life on North Haven can have an insular, sheltered feeling to it. This can be blissful—children roam free, parents confident in their safety, rides are freely asked for and given, and babysitters are abundant and trustworthy.

The downside to our little Mayberry is that awareness of social injustice can be relegated to the sharing of memes on social media. And so, watching people meme and counter-meme about the refugee crisis, homelessness in America, the upcoming presidential election and other triggering issues, I determined to focus my 9th and 10th grade English curriculum around social justice.

We began, after their fall expedition trip that included a visit to a former German P.O.W. camp, with an exploration of Maslow’s Hierarchy of Needs and the conditions that create social injustice and can lead to radicalization and violence. Maslow’s Hierarchy posits that in order to pursue self-actualization, every human needs to be secure in their access to food, water, sanitation and shelter; feel safe; belong to a group; and only then are they able to hold themselves in esteem and pursue their dreams. Limiting access to any of the lower tiers limits potential, and people will seek that third tier—belonging—in a variety of unhealthy ways.

To explore this idea further, students read Lord of the Flies. With that under their belts, they explored religious freedom with Persepolis, racial inequality with Ta-Nehisi Coates’ Letter to My Son, and examined the Bill of Rights and amendments to the U.S Constitution to assess whether these rights are enforced equally for all. They read Thirty Girls and learned about the mass kidnappings of young, educated girls in Uganda in the 1990s, and in Nigeria two years ago.

Author and North Havener Susan Minot spoke with them about the impetus she felt to share the story. They debated Hollywood whitewashing and researched LGBTQ rights, before and after Stonewall, and here and around the world. They read The Lararmie Project out loud, experiencing the power of words of both love and hate. They shared their opinions about cultural appropriation and learned the history of disability rights and food justice.

There were some surprises. I didn’t expect to discuss one student’s Confederate flag sweatshirt while we were reading Coates’ essay about the myth of racial equality. I didn’t anticipate the far reaching impact of the LGBTQ history bulletin board my students constructed—I see every student in grades K-8 for music classes, and they all came in and asked insightful questions about the rainbow-hued display. I didn’t expect to hear that a student complained that I forced my kids to make a “gay wall.”

I assigned an extension project for the end of the year, asking each student to choose an issue that spoke to them and find a way to bring something about it into the community.

Some chose to look at lobster licensing legislation, and to examine whether or not it discriminated based on age or socio-economic status. Some looked at military spending, the housing challenges on North Haven, and the school dress code. One student wrote poignantly about personal experiences with racism, homelessness and instability.

Two students took particularly decisive action in their projects. One conducted a survey to determine the prevalence of racial-, gendered- or sexuality-based slurs used at school and in the community. With her survey results, she wrote a thoughtful essay urging families to not only speak with kids about appropriate and inclusive language, but asking adults to consider their own language use and to model appropriate language. She hoped to have it published in the North Haven News, but it was rejected by the editorial staff as not the right tone for the school column. It instead went up on the school Facebook page, with the support of the administration, where it was well received.

Another student is on a mission to have all of our single-occupancy bathrooms available to either gender. Bathroom access for transgender, agender or non-binary persons is an explosive issue, and this student again began with a survey. Our school community in large part supports un-gendering the bathrooms, other than the major concern of the bathroom habits of young boys. The next step is a meeting with the school board.

The lasting impact of our year of social justice remains to be seen. At the least, I know that nine young people have been exposed to the factors that eliminate those bottom Maslow’s tiers for members of minority groups in all walks of life, and the consequences of that injustice. Maybe they’ll decide to speak up when they hear someone using hateful language, or think critically about something they see shared on social media. 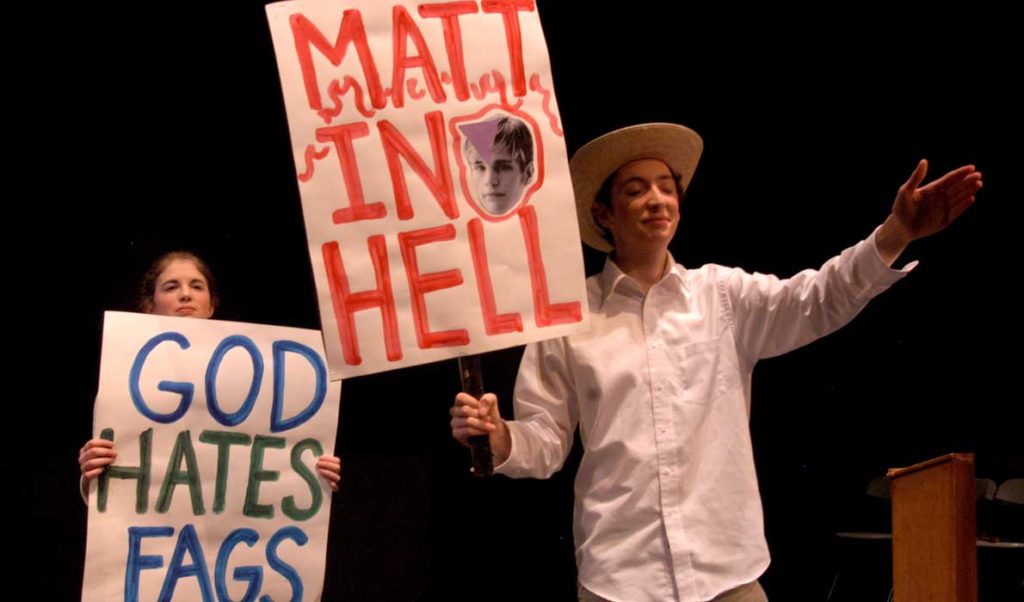 A scene from The Laramie Project.