As if on cue, a tagged Atlantic salmon was detected swimming above the Howland dam. Soon, people from throughout the state and beyond would gather where the Piscataquis and Penobscot rivers meet to celebrate the completion of a nature-like fish bypass around the dam.

The final milestone in the Penobscot River Restoration Project, the bypass enables sea-run fish to migrate around the dam between the sea and critical inland habitat for the first time in a century. With the bypass, the project reaches its goal: vastly improving access to nearly 1,000 miles of key habitat for native sea-run fish while maintaining energy.

River renewal benefits fish, wildlife and people alike. In just two years since the lower river was opened, alewives and blue-back herring runs have jumped from a few thousand to nearly two million fish, feeding eagles, osprey and other fish and mammals. Alewives also boost the lobster industry with highly-sought bait. Shortnose sturgeon have reached spawning habitat blocked for over a century.

American shad, numbering near zero in recent decades, are growing each year. This summer, nearly 8,000 shad passed through a new fish lift at the only remaining dam on the lower river at Milford. Anglers caught shad from the shores of Old Town for the first time in generations.

Large runs of silvery young fish will soon out-migrate from inland waters to sea, feeding cod and other groundfish, birds and marine mammals in the Gulf of Maine. They’ll provide a “prey buffer” to protect less plentiful young salmon en route to the ocean, onward to swim past coastal islands, then thousands of miles to winter ocean habitat. Atlantic salmon populations, holding steady, are expected to rebound more slowly.

A new generation anticipates the future river. Schoolchildren watch in awe as hundreds of thousands of alewives migrate upstream at the Leonard’s Mills Logging Museum in Eddington; an annual alewife festival and race helps fund  museum programs. Visitors admired river-inspired art by Howland students at the Maine Discovery Museum in Bangor. Students in Veazie participated in an Art in the Park school event held on newly accessible riverside land.

A cascading stretch of river, buried for generations, now flows through the former Great Works dam site near Bradley. Paddlers freely ply the waters from Old Town and Milford to the sea. The Penobscot Nation was selected to host the ACA Whitewater National Championships for three years, with robust support from area communities and businesses. Hundreds of paddlers have participated; an emphasis on youth races, Penobscot culture and the “new” rapids revealed by the restoration makes the races unique.

Finally, the river’s renewal profoundly impacts the Penobscot Nation, an indigenous people who share the river’s name and whose ancestors have inhabited the region for more than 10,000 years. Restored native fisheries are beginning to give meaning to long-held sustenance and ceremonial fishing rights. Cultural traditions are being renewed; an unimpeded paddle from the reservation to the sea in a traditional birch-bark canoe is again possible.

By working together to build on this tide toward a healthy, restored river, the unfolding Penobscot River restoration holds great promise for the future of teh river, its communities, the Gulf of Maine and beyond.

Laura Rose Day is executive director of the Penobscot River Restoration Trust, a nonprofit working to create sustainable native sea-run fisheries on the Penobscot River for people and wildlife. She holds degrees in wildlife management and environmental and energy law and has worked as counsel the Environmental Protection Agency. 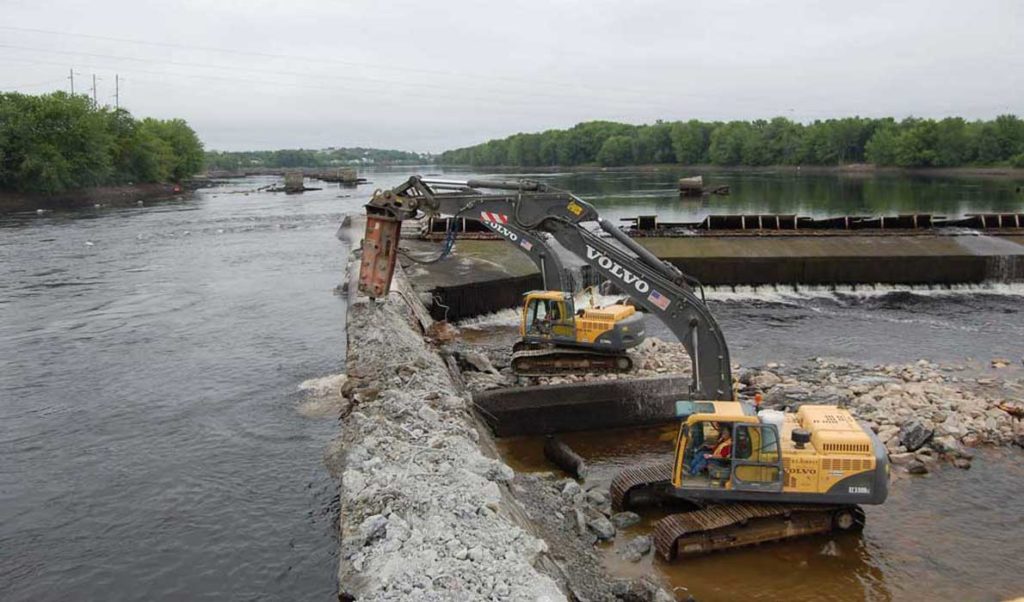 Dam removal on the Penobscot River.