Islands and rural communities can be severely limited in their educational systems. Many islands have very few school children, and often only one or two teachers. Finding the time and resources to provide children with the educational and social experiences they need can be a challenge.

Committed to “building opportunity, community, and a future for Maine’s working waterfront,” Islesford Boatworks (IB) was started in 2006 by the Ravenhill family as a way to support Little Cranberry Island’s waterfront and share their passion for building traditional wooden boats with children living in the Mount Desert region. IB offers summer boatbuilding programs for students of all skill levels, from age seven to adult. Some participate in the full summer program (6-8 weeks), some come for just a few weeks. In addition to the youth programs, IB offers an adult program and a Summer Camp Collaboration Program in which local camps come for a hands-on day of boatbuilding in their shop.

Each summer program meets twice a week for 3.5-4 hrs a day in an 800 square foot boatbuilding shop on the Ravenhill property on Little Cranberry. All three levels of youth programming, as well as the adult volunteers, work collectively to build one boat from start to finish over the course of 6-8 weeks. In Beginning Boatbuilding (age 7-11), students use traditional hand tools as they cycle through hands-on skill stations taught by IB instructors and adult volunteers. The Intermediate program (age 11-14) incorporates more in-depth woodworking projects, such as half hull builder’s models, and the Advanced teen program (14+) refines hand tool techniques and introduces power tools. Teens can also sign up for staff-supervised Open Shop Time, and three of them now work as assistant instructors, in addition to two full-time instructors and 5-6 adult volunteers. The program costs $90/week, but IB is committed to helping all interested students attend and offers scholarships and sliding scale tuition. 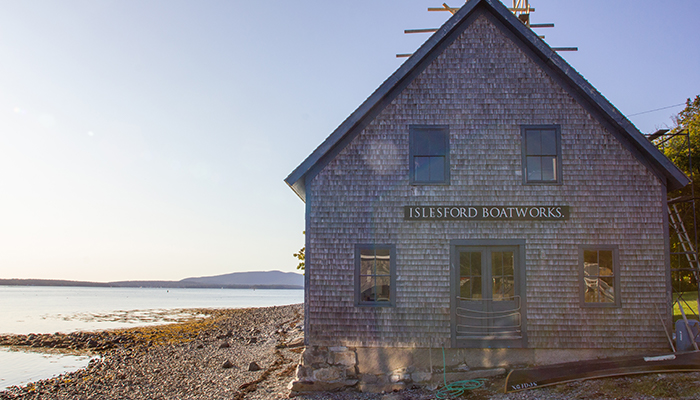 What are the operational costs of Islesford Boatworks?

One of the challenges of a small program is that there’s always a minimum cost. Even if you’re serving a really small group, there’s still a minimum operational cost. Our budget is usually around $30,000 for the summer program. In 2015, it cost about $23,000 but with so many more students this year, we hired another instructor.

How does Islesford Boatworks fund its programs?

When IB started, about a third of our budget came from grants, a third from student tuition, and a third from the summer-end raffle of the boat we build in the program. T-shirt sales also brought in some money. In the past few years, we’ve moved toward primarily grant funding because you can only ask so much from the same few people each year. About 75% of our funding now comes from grants, and this summer’s budget (2016) comes almost entirely from grants. Our goal is that any student who wants to can enroll, and tuition has always been on sliding scale, down to zero if needed, but it used to be more of an unspoken understanding. Since we’ve increased grant funding, we’ve been able to emphasize this commitment much more visibly and vocally.

What’s your grant-seeking strategy, and what advice do you have for other small organizations?

We try to expand the number and variety of grant sources, and we try to engage support from off-island donors. We’re fortunate in that we have a dedicated member of our board who identifies grant possibilities for us, and since I’m a stay at home dad during the school year, I can draw a 5% salary researching and writing grants. Last year, we wrote 15-20 grants and received 5. We got one matching grant from a previous donor, and we used this as leverage with other potential donors. That’s one thing small organizations can do: leverage a regular source of donation income to inspire other donors.

With grant writing, we try to capitalize on all our activities. We belong to the Teaching with Small Boats Alliance, a national organization of groups who teach kids life skills through boatbuilding, and last year we volunteered to set up a shared resource archive. This project, which we wanted to do anyway and is in line with our mission, ended up becoming a huge funding opportunity for us. We got $16,000, which is paying for staff time this summer to create and compile resources for the archive.

What other fundraising strategies do you employ?

Last year we held a Row-a-thon for our 10-year anniversary. It’s like a Walk-a-thon: island residents solicit sponsors for their row around Little Cranberry Island. Last year, we had about 40 participants in 20 boats. It’s a fun thing for the community, and the important part is that we’re asking islanders for their time, not their money, and we’re benefitting from their connections to donors living off the island. The donations don’t have to be big, they can be five, ten dollars, but it is money that doesn’t come from the island that we can use in any way. It also increases our exposure and expands our network. After last year’s Row-a-thon, our newsletter mailing list increased from 80 to 400.

Who are your students?

Three or four years ago, most students were not island residents. We’d get maybe one student from Great Cranberry Island. Now it’s an even split: for year-round residents and off-island residents, the number of kids who attend the full summer program is the same. Beyond that, we get summer residents and also summer vacationers who come for just a week or two. We’re in week 2 of our 2016 program right now, and we have 30 kids enrolled. Last year, we had 50-60 total. Of those, probably 20 came half-time and 20 others for a week or two.

Besides woodworking skills, what do students gain from participating in the boatbuilding program?

There is an inherent community aspect to boat building. When you build a boat, there’s also an inherent ownership of this thing that you’ve built, you take personal pride in it and feel responsible for it, and you’re connected to this larger group of people who feel the same way. It’s different than everyone building their own individual box or step stool. You’re all working together toward the same goal, you all take personal pride and ownership in this object that is inherently communal.

How does Islesford Boatworks meet the needs of the larger community?

I want to tell you a story. Usually, I teach the kids’ classes in the mornings and in the afternoons I work with a few retired adult volunteers to move the boat along toward completion. But three years ago, I had a baby, and the only time I could work on the boat was after 8pm, which was too late for the retirees. Word got out, and this new group of volunteers in their early twenties started showing up, people who hadn’t gone through our program as students, who were bored on the island and needed something to do. Thirteen people showed up almost every night that summer. There are 95 adults coming now, and last year we had more adult participants than kids. This summer, we already have 30 and it’s only week 2.

How does the adult program affect funding?

Opening up opportunities for adults has given us a new fundraising opportunity because we’re engaging a whole new segment of the population. We offer adults one night a week, as well as one afternoon a week since the lobstermen can’t come late. It’s a social time—about half the people play music and half help build the boat. It’s also given us a new grant-seeking opportunity because we’re engaging a whole new segment of the population. It’s also ushered in a new program and a new fundraising opportunity. We’ve partnered with one of our instructors, a skilled woodworker, to offer woodworking instruction. For just the cost of materials, adults can develop bandsaw skills and build small projects—cutting boards, candlesticks—they build two of whatever they work on, one to keep and one to donate to IB. They get the tax write-off and we get to raffle off the item.

Adults aren’t going to participate if they have to pay $90 a week like the kids. This way they can participate either as volunteer boat builders or by making raffle items.

Islesford Boatworks has tripled its summer participation in recent years. Over 250 individual students have attended IB over the past 8 years, many attending year after year. In 2015, over 150 people—students, adults, volunteers—participated in the summer program.

Brendan Ravenhill, co-founder of Islesford Boatworks, drew his inspiration from his experience as a boat builder with Rocking the Boat (RTB), a boatbuilding and on-water education program that works with inner city youth in the South Bronx, New York. As he explains on IB’s website, “Throughout my experience with RTB, I was struck by how the leadership skills and sense of community that students gain through boatbuilding can be applied even in an urban environment. I feel strongly that such a program has tremendous impact on an island where boats are a daily part of life…. I have often pondered the future of our island community, and I believe that Islesford Boatworks engages a younger generation to consider new ways of supporting themselves through the sea.”