Luke’s Lobster and the Island Institute have partnered to build an e-commerce platform for wild and farmed seafood producers throughout Maine.

The partnership, announced Wednesday, responds to diminished market demand during the pandemic, when many restaurants have been closed.

The goal is to build new markets and increase the availability of lobster, crab, scallops, oysters and other farmed and wild seafood, and drive economic activity in coastal communities.

The goal is to create a marketplace not only for Luke’s but for seafood producers across Maine, Luke’s founder and CEO, Luke Holden, told Mainebiz.

“A true rising economy lifts all boats,” Holden said. “If we can increase demand, it will be helpful to everybody. This is not to be competitive. It’s to increase demand.”

Funding will be used to build and diversify Luke’s e-commerce business, creating a business model built on a commitment to social outcomes and sustainability that others can learn from and replicate across the country.

“The question was how to build a supply chain that isn’t beholden to cruise ships and restaurants at a time when they aren’t functioning,” said the Island Institute’s president, Rob Snyder.

‘How are you doing?’

The project began as a friendly conversation between Holden and Snyder. Holden has served on the Island Institute board of directors.

“We’ve built a very trusting and friendly relationship,” said Holden. “In March, he reached out as a friend and said, ‘How are you doing?’”

At the time, Luke’s Lobster was struggling due to the economic shutdown. The company owns 26 lobster shacks nationally and 11 internationally. All had closed, along with the firm’s production facility. Most of his approximately 700 employees were on furlough. (Fourteen of the U.S. restaurants have since reopened.)

“I was fearful that, from an industry standpoint, boats would be tied up and the supply chains and infrastructure that were necessary would be in jeopardy,” Holden said.

A week later, he continued, “Rob called back and said there could be an opportunity for us to brainstorm how a for-profit and a nonprofit might come together to build a model that can ultimately offer relief and resiliency to the seafood supply chain in Maine.”

Within days of closing its restaurants, Luke’s Lobster launched an e-commerce platform to continue offering its lobster and crab products, seasonal seafood such as Maine dayboat scallops and halibut, and gifts.

The two discussed the idea of enhancing the platform to include other seafood producers.

They identified Silicon Valley Community Foundation as a source of funding. The foundation has given out more than $5.6 billion in grants since it was founded in 2007, according to its website.

Beyond the economic benefit to harvesters and seafood producers, the funding requires the project to meet broader environmental and social objectives created collaboratively by Island Institute and Luke’s Lobster. The metrics include providing technical assistance on clean energy and water quality improvement projects to fishing wharves, B Corporation training for businesses considering certification, and reinstatement of funding for several projects through Luke’s Lobster Keeper Fund that were put on hold when COVID hit.

Luke’s Lobster became a certified B Corporation in 2018.

The project will also look at decarbonization of the seafood supply chain by gathering data and seeking solutions. The shared solutions will enhance the ability of the Island Institute’s Tom Glenn Community Impact Fund to combine decarbonization, solar and other climate projects with Glenn Fund grants and loans to Maine’s small businesses.

The entire project will be overseen by a five-person national advisory committee that will offer ongoing feedback and recommendations.

“It’s been a lot of work to get to the start line,” Holden said. “We just closed the funding last week. We’ve created a vendor questionnaire that will be first point of entry to start evaluating who might want to partner with us.”

“This was meant to be a response to a crisis, so our goal is to move quickly,” said Snyder. “The goal is to help the communities that rely on fishing as we head into a very difficult winter.”

Next steps include building  a sourcing calendar based on the seasonality of the different types of seafood. Luke’s will create digital content, working with seafood producers, aimed at educating consumers about the ease and health benefits of preparing seafood at home, and telling stories of Maine’s fishermen, aquaculturists and coastal communities.

Luke’s will also manage fulfillment, customer service and shipping of product at its processing plant in the Saco Industrial Park.

“We’ve got 10,000 square foot of space dedicated to this, where we would pick and pack and fulfill orders,” Holden said.

He expects a “dramatic” increase in hiring for positions that will range from marketing and digital content creation to pickers and packers.

Holden is in the midst of connecting with key stakeholders, including seafood producers and a representative from Sen. Angus King’s office, to broadcast the initiative.

“Someone will look at this and say, ‘Now I have a real partner to build the business with economies of scale, with a customer service department and a marketing team,’” he said.

He expects to roll out the revamped platform in January.

The focus is on minimizing potentially catastrophic community and economic disruptions while building resilience in anticipation of future crises, explained Snyder.

Communities down the peninsulas and out on the islands have more than 60% to 70% self-employment. The Island Institute supports communities by helping businesses leverage technology like e-commerce so they can stay in touch with and reach new customers.

The lessons learned from the partnership with Luke’s Lobster will be instrumental in strengthening Maine’s coastal businesses, while informing similar efforts around the country, Snyder added.

Maine seafood producers, harvesters or fishermen interested in offering their products on the Luke’s Lobster website can find the application by clicking here.

All applicants will be considered through a review by a selection committee made up of two members from Luke’s Lobster, two members from the Island Institute and a member from the Maine Coast Fishermen’s Association. All Maine seafood-related businesses are encouraged to apply, regardless of size. 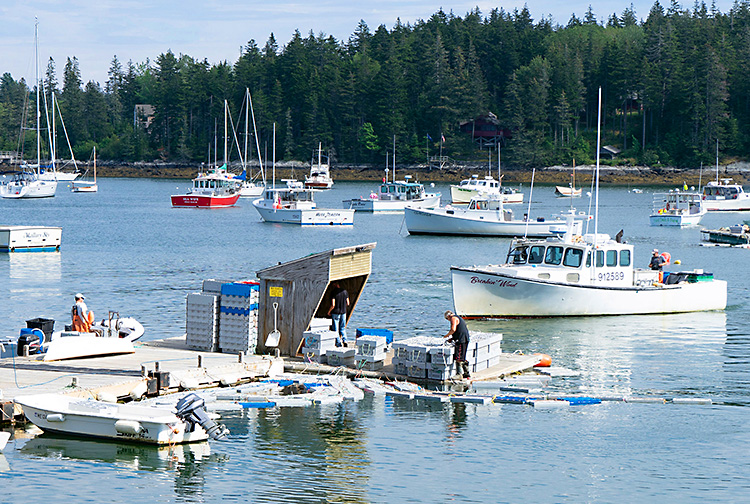