Editor’s Note: At the end of August, Erin will conclude her Fellowship with the Island Institute. Erin told this story at an end-of-year celebration for the Island Fellows.

How many islanders does it take to change a tire?  Well…

Partway through my second year as a Fellow, I was gifted the use of a blue 1990s-era Ford Ranger so I could drive to fire department calls.  This was a marked improvement over my previous arrangement, which was to walk or ride my bike to the scene with a medical jump bag in tow.  The Ranger is an island car through and through, and everyone knows what that means…it has plenty of…charming idiosyncrasies.  One day this winter, I was driving to the library, and I noticed that the gravel road felt much rockier than usual.  I parked at the library and started walking up to the building.  But on my way I noticed that one of the tires was completely flat, all the way down to the rim.

I grew up in suburbia, so my parents’ version of teaching me how to change a tire was making sure I had the phone number for AAA.  That’s not an option on most islands.

I went to a tire changing workshop in college and watched someone do it but still had never done it myself.  I thought I could probably figure it out if I had the right tools.  So I called the fire chief (islander number one) to see if there were any tools at the fire station I could borrow.  Instead he told me to come over to his father’s basement, where we dug through old beach toys and fishing gear before finding the right wrench.  He asked if I had ever changed a tire before, and I hesitated just long enough for him to get a read on the situation.  He put the necessary tool in his car and told me he would meet me at the library (I was on my bike), but not before informing me that he made his own daughter prove that she could change a tire before leaving for college. Island parents, man. They will straighten you out, even if you’re not their kid.

We managed to get the tire off and sent it up town as freight on the evening boat, with the help of the island parcel delivery person (islander two), who, incidentally, lent me the truck in the first place.  That was Friday night.  I was trying to get off island for an event on Saturday, but I wanted to go ahead and get the tire situation squared away.  So I took the early boat to town Saturday morning and caught a ride with a friend (three) to Falmouth, where I exchanged the tire.  Then we turned around and went straight back to the Casco Bay Lines terminal, where I caught the next boat out to Long.

I’ve been told that Long Islanders are notoriously frugal, and some of that must have rubbed off on me because I decided that instead of paying for freight service on the downbay run back to Long, I would just carry the sizeable truck tire on board with me.  There were several comments on this boat ride, but my favorite was “Ahh, just a girl and her tire.”  From a complete stranger.

When we arrived at Long, someone saw me staggering off the boat with the tire and offered a ride.  This person (four) does construction work, so when he found out I was trying to change a tire with a borrowed wrench and a broken jack from the early ’90s, he went home and got his shop jack and hoisted the car up.  Then it was pretty straightforward to put the new tire on, tighten the bolts, replace the hub cap, and lower the car back down.  I was able to make the next boat off the island too, which was pretty exciting.  Who doesn’t love a triple header ferry ride?

So I guess the answer to my original question—how many islanders does it take to change a tire—is: it depends.  In my case it was four, but I have no doubt more people would have kept chipping in until the job was done.  There are a lot of things I’m going to miss about living on Long Island.  The hilarious number of golf carts.  The smell of cigarette smoke and diesel fumes mixed with salt air on the way back from a rescue call at 3:00 am on a starry night-becoming-morning.  An entire road lined with dozens of eccentric bunny rabbit stuffed animals and sculptures.  Cross-country ski trails out the back door and an ocean view out the front window.  But I have to say, several people you don’t know all that well dropping everything they’re doing to help you in a pinch is at the very top of the list. 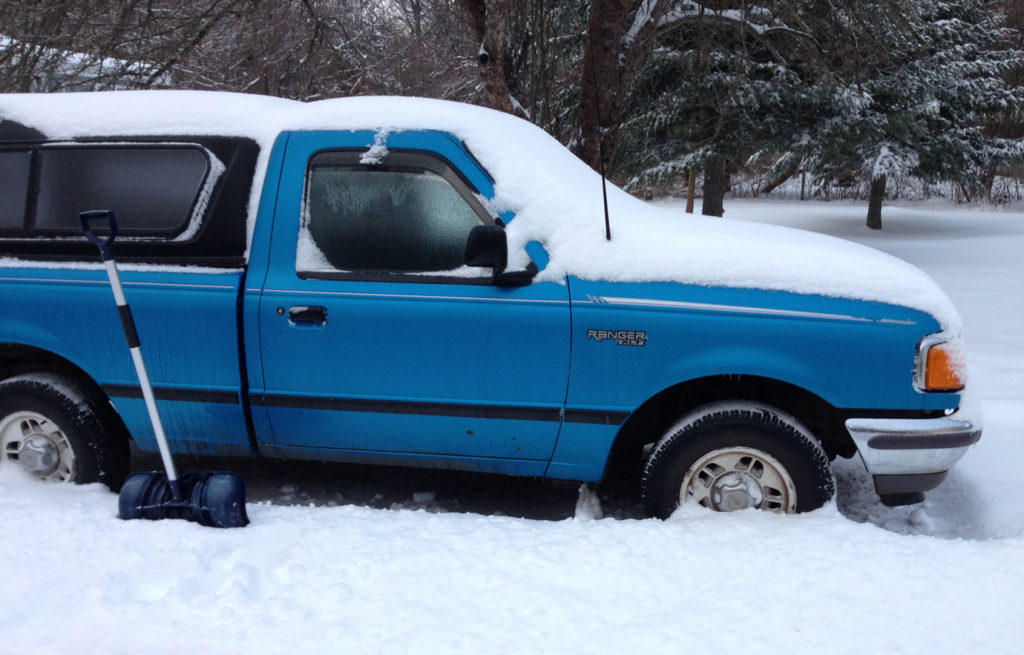