This post is from Erin Love, the Island Fellow in Casco Bay. She provides an update on the work going on with the East Casco Bay Community Energy Action Team (CEAT), one of five teams pioneering intergenerational education and leadership around energy issues in seven year-round island communities in Maine. Read more about the CEAT program here.

We are the East Casco Bay Community Energy Action Team, and we work on Long, Chebeague, and Cliff Islands in Casco Bay. We started as a partnership between the Island Institute Energy Program staff, the schools of Casco Bay, and Island Fellow Erin Love, who lives on Long Island and works on several Casco Bay islands.

Although we serve several islands, our work is focused on Long Island right now. Long Island has a year-round population of approximately 230 people (fewer in the dead of winter—we call the people who are on the island for longer than summer but not quite the whole year “tweeners”). Long Island has been its own town since 1993, when it seceded from Portland. While Long Island has a substantial fishing community, many of its citizens work on the mainland, taking the 40-minute ferry to and from town every day. One of the most exciting recent developments is that construction of the new community center is finally underway!

The membership of the East Casco Bay team is fluid and changes with the projects that we take on. Erin Love serves as the coordinator and reaches out to community members about project opportunities. Community members with an interest in a specific project join the CEAT team to work on that project. Currently Mark Greene, the Maine Islands Coalition representative for Long, is working to organize the second Weatherization Week on Long. And Paula Johnson and Marci Train, the Long Island School teachers, are in the early stages of an energy project at the school.

Our first project was coordinating an Energy Day at the Long Island School for students from Long and Cliff Islands. We then modified that interactive presentation and took it on the road (err, ferry…) to Chebeague Island! On both Energy Days, students learned about different forms of energy, talked about why it is important to conserve energy, and measured how much energy common appliances use. We hope the activities jump-started the kids’ thinking about energy issues and made them curious to learn more.

One of the cool findings that came out of the Energy Day on Long Island was that the thermal camera revealed some chilly spots in the school that could use some extra insulation. Erin and lead teacher Paula Johnson are working together to think about how to explore this issue further, possibly with the help of a professional energy auditor. In addition, Erin, Paula, Marci, and new principal/superintendent Barbara Powers are thinking about how the school can be a leader in the community for energy issues. The roof of the school is a prime location for solar panels, as outlined in the Long Island Renewable Energy Feasibility Study produced by the Collaborative for Island Energy and Action (CIERA). A demonstration solar panel would be a fun way for students and other community members to learn about the technology before thinking about a larger scale community solar project. We are still exploring options for an energy-related project at the school. We hope it—whatever it ends up being—will be a centerpiece for moving the energy conversation forward island-wide.

Once logistics for Weatherization Week are nailed down, we expect to spend more time working toward a concrete plan for the school energy project. We feel lucky to have an enthusiastic group of people working on locally meaningful projects.

Chebeague Island students are amazed to see how much power their smartboard uses. 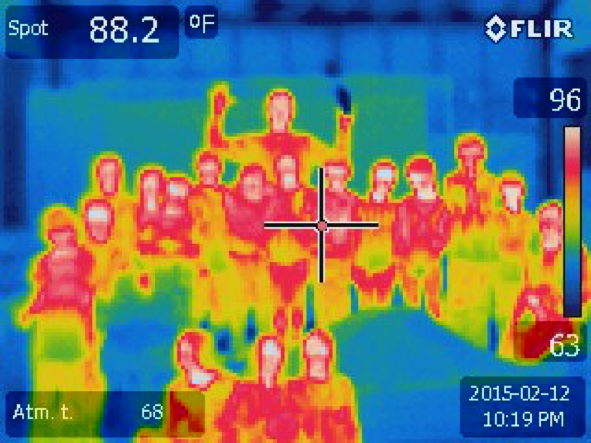 Long and Cliff Island students pose for a thermal camera photo during the Energy Day on Long Island.